The wizard of Saint-Imier

Roland Iten, the eponymous and eccentric creator of high-end mechanical objects for men, is stepping out into the big time

Swiss jeweller Roland Iten is well known only among the rarefied orbits of the extremely wealthy with an interest in bespoke mechanical creations. Those clients, or ‘friends’ as Iten prefers to call them, include Sylvester Stallone, Jackie Chan, and Romanian billionaire businessman and former Boris Becker manager Ion Toric, among others.

These mechanical creations are as varied as watches and buckles to cuff links and spectacles. Everything is made by a small team of craftsmen helmed by Iten himself in the charming Swiss town of Saint-Imier. If you needed a sense of the pedigree involved in its operations, consider this: the current chief of the manufacture was the former manufacturing head at the venerable Harry Winston marque.

I ask Iten how he got involved in the watch business, and he says with a little smirk: “It’s very simple. I’m actually Swiss. You either make chocolate or you are in the watch industry.” He adds, “I studied fine art and transportation design and I live in the French region of Switzerland where the watch industry is around you. Previously I worked in Italy, and then I got a project in Switzerland where I got involved in Carl F. Bucherer in 2000.” 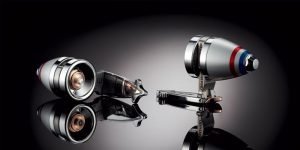 While the stint with Bucherer marked his formal entry into the world of mechanical creations, the spark was lit much earlier in life by a father, who in his own words, never had time for him. “I had a very busy father, an engineer, who did security systems for power plants. The only time I had with him is when I woke up at 5 o’clock in the morning and brushed his shoes and then built toy airplanes and cars. He told me how to plan constructing these from paper, including the flaps, wheels and moving parts, as we didn’t have Lego that could do those things back then. So as a 4-year-old I had all these plans on paper and that’s how it started.”

Iten has created some of the world’s most expensive creations. These include the $6million R60 Diablo belt buckle that contains a 60.66 carat diamond and the Madrid Open trophy (commissioned by his Romanian friend Toric who owns the tournament) that was made using 28 kilos of gold and 32 diamonds making it the world’s most expensive tennis trophy. But Iten isn’t chasing records to create the most expensive objects – instead, he says what really drives him is the desire to create products of longevity. That again ties back to the influence his father left on him. “My father had a peculiar personality trait. He could not bear to have a product break. We changed mixers and toasters every six months. The moment his car went over 10,000 miles he would get a new one because in his mind he just couldn’t bear the idea of something breaking. This was a very big inspiration to me, because everything I now do, I do for 1,000 years. Everything I create must last for one thousand years.” 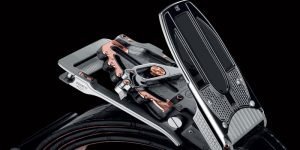 Iten is the chief designer and conceptualises all the product designs himself. It takes a minimum of 3-4 months for the objects to go from his sketchpad to a physical working model. Every year, there are no more than 100 items across all categories manufactured – most of them bespoke, one-off creations. The maximum number of products of a particular item that he will make is ten, meaning that the chances that you will see one on the person sitting next you in first class is slim. The starting price is roughly $20,000 that then rises as per the client’s specifications. They’re retailed out of a very few number of touch points across the world in a distribution model that Iten says is similar to that of Richard Mille and Greubel Forsey. In Dubai, you’ll find his creations at the Rivoli Prestige in the Burj Al Arab, in London at William & Son and at Cellini in New York. So it’s hardly surprising when he says his typical client is “someone who already has a watch collection and wants to have a further experience with mechanical objects.”

The brand has already collaborated with industry giants like Bugatti (on another $84,000 buckle that he was wearing at the time of our interview) and also Greubel Forsey that are at present one of the most technically accomplished luxury watch brands in the world.

As an independent marque (he lets slip that mega conglomerate Richemont’s owner, the billionaire Johann Rupert is one of his oldest clients), Roland Iten has no plans to align itself with a major group anytime soon. “As a group you have a lot of power, but also a lot of politics. You have things like a six-month forecast and product meetings that make you work as a machine, not an artist. But as an independent brand, I’m the creator, I’m the one sketching my ideas, I’m creating my patents.” It’s those patents that Iten says will be his legacy. “I don’t have a succession plan in place per se. I have about 30-40 patents filed already in my drawers and there are at least 100 more pending. When I die there will be this very rich box of patents that the group that takes over the management of the company can then innovate and build upon.”

For the moment though, Iten’s not focusing on what’s going to happen in the next few years – he’s all about living in the moment. “For me what I’m doing is not work – I’m currently unemployed. I’m just running after my next dream.”