The rebel who built The Gabriel Hotel in Cairo

Construction might be in Nuaman Soufraki’s blood but instead of following in the footsteps of his property magnate father, he is carving his own path designing luxury interiors.

On his first day working as a graduate for his father’s construction firm, Nuaman Soufraki thought he would end up working in the head office and so dressed the part, showing up in a smart suit, shirt and tie. He need not have bothered. His father Hussein, founder of the HNS Group construction firm, with a property portfolio stretching from Canada to Turkey, sent him to work on a building site.

It should not have come as a surprise as Soufraki junior’s upbringing was one of discipline and hard work. He honed his project management skills, doing everything from wheeling around cement to drawing up the accounts. Today, Soufraki is the man behind Cairo’s Gabriel hotel and is also launching his own interior design company, taking with him the experiences he garnered working in his father’s firm. He was born in Tripoli, Libya, before his family emigrated in 1978. He attended boarding school from the age of four in Malta, where he was the youngest pupil in the school. “That is where my life began. I became very independent from a very young age,” says Soufraki. For the next 12 years, he went through the boarding school education system in the UK before his family relocated to Canada.

“The internet did not exist at the time and I had not heard much about Canada,” he says. “I saw pictures of woods and thought I would be in a village. I was there for two years and the whole concept of living with family – I could not bear it, we had more rules and regulations being in a Muslim family than I had at school.”

Family pressures were too much for Soufraki, who at the age of 17 decided to pack his bags and escape in the middle of a blizzard. He had stuffed his belongings in bin bags and left at 3am with two taxis he had booked – one for him, the other for his luggage. He turned up at a young people’s shelter who informed him that he was not staying at the Ritz and assigned him a small locker for his belongings while the rest was kept in the office. “I lasted two or three days and got myself a job as a sales rep for Encyclopaedia Britannica,” he says. “I was hungry to make a point and the woman who hired me trained me to become regional manager for the whole state of Ontario.” By this point, his father had cut him off and threatened to disown any of his seven siblings who contacted him. Eight months later, his father invited him back to the family house and instructed him to get a degree in international business in London.

“I was a bit of a rebel as a teenager. I am a middle child and was a revolutionary. I paved the way for the rest of my siblings,” he says. Soufraki eventually towed the line by completing his degree and enrolled in the family business, slowly working his way up. The family owns a mansion in Heliopolis in Cairo where his brother Salah Din Soufraki, known as Dino, designed the local shopping mall.

That was also Soufraki’s first major design project. The Gabriel is a boutique hotel and forms part of the mall complex. “My brother asked me what my ambition was in life,” says Soufraki. “I told him to design a lifestyle hotel and to take that brand all over the world. He mentioned there was space for a hotel and I jumped on it. I was so excited, I was conceptualising ideas for the space before I had seen it.” 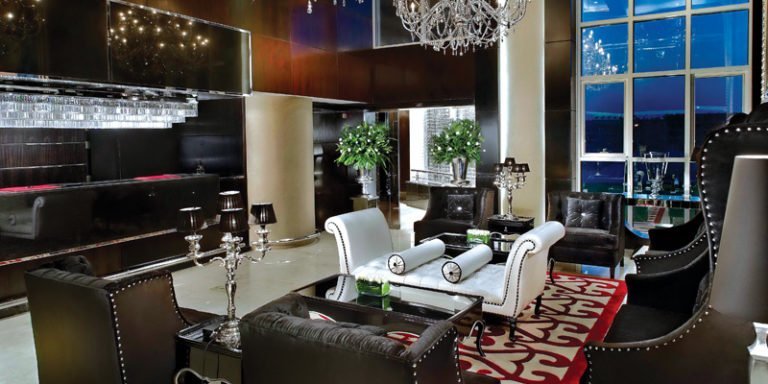 Soufraki developed the name and overall design of the hotel, choosing every detail from the bathrobes down to the cutlery. The Gabriel opened in 2012 and has since amassed several awards, including one for high-end design from the World Luxury Hotel awards.

“The challenges I had working in Cairo were definitely unique,” he says. “I was trying to source a carpenter and went to meet one in Maadi [district]. We sat with his family and my driver drinking tea and a lamb and baby camel went by. I thought, this would never happen in London.”

The fall in tourism amid fears about security has had a devastating impact on the hotel sector in Egypt. While Soufraki still maintains managerial control over the Gabriel, he is hoping to expand on his interior design ambitions instead. “I never did a degree in interior design, it was more a passion I had,” he says.

His enthusiasm began during his student years, when he showed more interest in art than his business degree. He would also design the show flats for his father’s residential projects in London, which would be the first ones to sell. “That was when my passion started and my apartment was featured in the 25 most beautiful apartments by Tatler,” he says.

But while the economy is suffering, the well-heeled still have cash to spend. Soufraki is planning to have showrooms in both Cairo and London. The eponymous Nuaman Soufraki Interiors aims to add his personal touch to designs. “People will hopefully hire me for a particular lifestyle that I sell,” he says. “My inspirations come from everywhere—travel, magazines, places I stay. I cannot sleep at night sometimes if I start thinking about designs.”