Jordanian multi-millionaire Mazin Al Khatib was at the top of his game in the high stakes investment banking industry when he decided to quit and chase the next million in a more classic way. Al Khatib, who was the middle east managing director for the financial powerhouse Warburg Pincus, swapped the high-rises of DIFC for the dusty streets of Al Quoz – where you’re more likely to see a construction worker than a suit – to start his own classic car business. He opted for the bright spark neighbourhood of Alserkal Avenue. Here he recently opened a showroom in the warehouse-styled units.

“I began working in 1989, but I only started making real money in 2000, which is when I purchased a 1971 Corvette Stingray in Bahrain where I was based at the time,” says Khatib. His fascination with vintage cars started when he was a teenager; he recalled dreaming about a [Shelby] AC Cobra as a teenager and in 2006 he managed to buy it from someone in South Africa. It’s now “the crown jewel” of his collection. 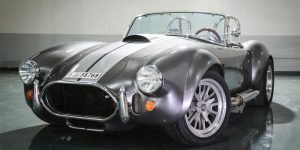 Khatib says that although he started collecting classic cars at the turn of the millennium, he never intended to resell any of them. However, as his collection grew, the financial whiz noticed a peculiar phenomenon in his portfolio. “When I looked at my personal investment portfolio, it was my classic cars that appreciated the most – more than my real estate, stocks or bonds. That’s when the idea struck to leave banking and convert this passion into a business.”

He set up Nostalgia Classic Cars in 2015, and his showroom in Alserkal Avenue followed this year. This is where his crown jewel is now parked, surpassed in prestige only by a handful of artworks that fill the adjacent galleries. The AC Cobra is joined by a dozen others out front, including a swept-back Jaguar E-Type, a stately Bentley S1 and a high-riding Lamborghini LM 002. Inside, the gregarious former investment banker, now the founder and CEO of Nostalgia Classic Cars, keeps a close eye on a dozen more from his upper floor office. Most of the cars are priced between $80,000-$90,000, barring outliers like a Lamborghini that costs around $300,000. 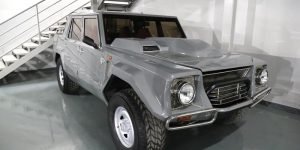 When Khatib quit his job two years ago to start Nostalgia Classic Cars, he had only 23 cars in his collection. Today, there are 106. Seventy per cent of the cars have been sourced directly from the owners, while the remaining handful were sourced from dealers and through auctions. He says a large part of his collection are “barn finds,” which is how he found the Lamborghini LM 002. “During my days as an investment banker I was travelling all the time. I was in Lebanon going to see some classic cars up in the mountains. On the way, I saw the Lamborghini LM 002 monster parked on a piece of land along the way. I asked my driver to stop and I asked the man who owned it if it was for sale. We agreed on a price. We had to bring a winch with ropes to lift it as it was in a very dirty condition and stuck in the sand. At that moment, I began to wonder if I had made a good decision but I brought it to the UAE and restored it. Today, we’re offering it for almost a million dirhams.”

Trading is just one arm of Nostalgia’s business. The second is using the 1,000 square metre space to host glamourous events. The third is offering end-to-end restoration services for classic car owners in a dedicated workshop in Dubai, which Khatib says is the only one of its kind in the region. “I have a full team under one roof to look after every aspect of maintaining and restoring classic cars. Restoration is something that I suffered with during my early days when I started collecting cars and so I wanted to set up this facility. This was an essential part of the business for me.” He added, “A big struggle for any collector is also sourcing parts. In our facility, I have a dedicated person whose only job from 9-6 is to look for parts.”

Khatib, who grew up in Dubai, recalls how, as a boy, he tried desperately to convince his well-to-do parents to buy cars other than Cadillacs and Buicks. His parents never indulged him as they viewed cars as mere modes of transport. “Maybe that’s why I like classic cars today, because I was deprived of them when I was growing up,” he quips. He still vividly recounts the time he convinced his neighbour (who had just purchased a brand-new Mercedes 500 SEL) to take him for a 200km drive the day he got possession of the car – an epiphany for the then 15-year-old who lamented ceaselessly about the experience to his parents upon his return. 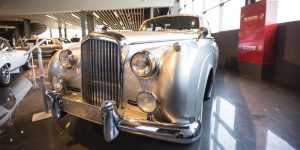 Today through his Nostalgia Classic Cars venture, Khatib wants to make sure enthusiasts like him aren’t deprived in the same way. “I want to make sure there is a classic car culture here in Dubai,” and it seems he has the backing of the Royal Family. “There is support coming in from their highnesses and we see that in exhibitions. Previously, classic cars weren’t part of the Dubai auto show, but today they have an entire wing dedicated to classic cars.”

Khatib, the banker, admits that with a current inventory of 106 cars, he’s probably overstocked by 50 per cent. However, Khatib the collector says that he’d like to grow the restoration and events division. The response to these two lines of businesses of Nostalgia Classic Cars he says has already been “amazing”, and he says that he would like to grow it to the scale where he doesn’t need to sell any of his cars. There’s one that will never be available for sale though. His final words being, “My AC Cobra is not for sale!”