Keeping the craft of dhow building alive in the UAE

Salah Bin Touq is fighting against a tide of commercialism to continue making dhows, some of which are as large as freighters.

Standing deep inside the bowels of the shell of his mammoth dhow, there is something slightly epic about the weathered face and determined countenance of Salah Bin Touq. For the past eight years he has been building dhows of freighter proportions, some of the largest in existence, in a humble shipyard in Dubai’s Al Khor, to ferry trade to and from the Horn of Africa.

Much like the prophet Noah who built his fabled ark, Bin Touq’s venture may seem slightly redundant in an age of steel shipping containers; but, unlike Noah, the only flood his vessels are up against could be said to be guarding against is a deluge of multiculturalism.

Once upon a time dhows were the UAE’s lifeline, he explains. “Historically, everyone worked on the dhows, even the Bedouin. When the summer came they would go on the dhows for pearl diving and for trading – to bring rice, food and materials for their lives. There were no planes at that time, no trains, no ships, nothing. People needed food, clothes, medicine, everything and the only way they could get it was by going out to sea.”

But he acknowledges the glory days of the dhow seem a relic of the past. “Emiratis now are becoming lazy because they have everything and they don’t think about [traditional] enjoyment. We know so many families who have money, they have everything but they don’t have boats,” the irreverent father-of-five explains with unexpected forthrightness.

“They are sitting with the computer. Even if I go to my house, three or four children are sitting with their phones, chatting, checking Instagram, watching movies.” And that loss of connection to the old traditions is a detriment to society, he says. Life at sea is a great allegory and preparation for life. 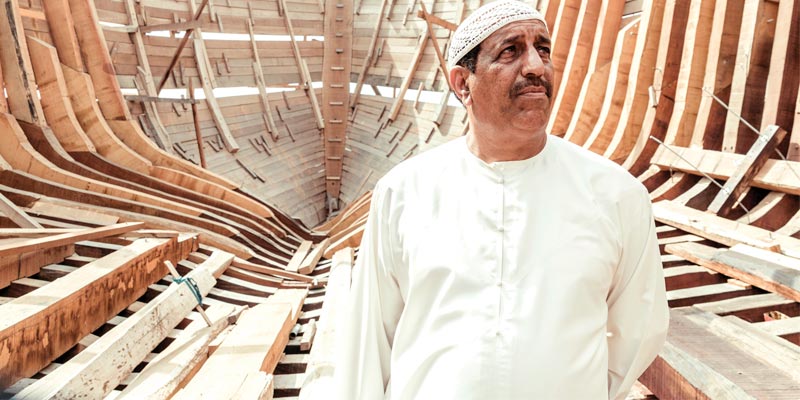 “When you go out on the boat you have to be fit enough, you have to learn from the sea. You face the wind, you face the waves, this is life. Sometimes you get nothing to eat. This new generation, with their mobiles and computers seem perfect – but they cannot swim.”

It’s clear that Bin Touq’s motivations for dhow building, which he does with his brother Huraiz, are not guided by profit. The current model under construction, spanning 52-metres long, 15-metres high and 15-metres wide, has been two years in the making and Bin Touq estimates it will take another year to complete. It is just short of the record 60-metre Fazza the brothers finished in 2012.

He says he expects to start turning a profit on the 1600-cubic tonne capacity dhow, which will have cost about $2 million by the time it is completed, between five to 10 years after it starts sailing – depending on the market. This is the reason Bin Touq’s boats have few peers, except for the dhows that run between Deira and Iran.

“People want profit. Dhows do not make the same profit as hotels, towers or malls. The people who have money will invest their money in good businesses.”

So why is the former UAE naval officer of 20 years engaged in such a pursuit? “We are crazy. I am retired now, what else will I do? Go sit in a cafe drinking coffee? When I wake up in the morning, where will I go?,” he asks, tongue-in-cheek.

The charmingly roguish Emirati says his occupation is similar to gardening; people grow tomatoes even though they can buy them for marginal cost at a market. “This garden gives you energy, it gives you hope to do something. I am coming here running around every day. Yes I make myself tired, but I enjoy it.”

The passion for boats evidently runs through his veins. “This is our family business. My grandfather, my father, my ancestors are all in this kind of business, from both my mother and father. Back then, they were building boats to dive for pearls.”

From the age of seven, Bin Touq and his siblings – he is one of nine – started building boats out of empty cooking oilcans and corrugated iron. “We put [the iron] in the road to let the car pass it and make it straight.” They would affix masts to their creations and built them so big they could be sat in. Later, once he was married, he built a boat for his wife when they didn’t have the money to go on a honeymoon.

It is this traditional way of life Bin Touq is hopeful the government will get behind, similar to initiatives in Qatar that support dhow building. “We need to make a place just for the traditional dhows to save this kind of work and teach the next generation.”

But whether it happens sooner or later, one thing is clear for Bin Touq – he’s not going anywhere. “I must be near the sea. This is home for me.”