Giving back comes naturally to Cindy Crawford. As a child, she lost her younger brother to leukaemia and has been volunteering with sick children ever since.

Celebrity and brand partnerships by their nature do not last forever. And then there is Cindy Crawford and Omega. She has been an ambassador for the Swiss watch brand for nearly 22 years. That is longer than even her first career, which spanned most of the eighties and nineties, when she was one of a handful of golden girls who heralded the arrival of the supermodel. But Crawford, 50, has always been a woman with staying power. She is an elite fashion star turned entrepreneur, with a business portfolio that includes a top-selling skincare line and a home furnishings range with a $350million annual turnover in the US.

In her role as Omega ambassador, the glamazon girl from small town Illinois has travelled the world, opening stores and supporting Orbis International, the sight-saving non-governmental programme supported by the watch firm. We meet at her  hotel in London, not far from Omega’s swish boutique in Oxford Street in West End. She is meticulously on time, immaculately turned out and firmly focused. You have been with Omega a long time, I volunteer. “It is incredible,” she acknowledges with a smile. “I am very fortunate.”

The deal was sealed, she recalls, after an initial introduction via an advertising campaign – “just a regular job for a young model. We liked working together. It’s about quality and I think Omega has a real history. Also the brand is very international and that was a great thing for me. Through our relationship, I have been around the world with them several times.” 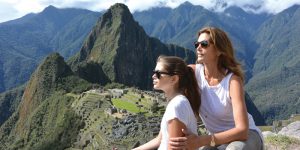 Cindy Crawford with her daughter Kaia during a trip to Peru with the flying eye hospital Orbis International.

Crawford recalls her visit to Peru two years ago, along with the Flying Eye hospital run by Orbis International. It was the subject of a documentary called Hospital in The Sky. She was invited to watch an eye operation but admits she was not sure she could handle it. “It was pretty intense,” she says. “I had to step out at one point. But I did get to meet the children who were going in for operations beforehand. We were hanging out in the waiting room with them while they were being prepared for surgery.” Her daughter Kaia accompanied her on the trip. The “handing over” of meaningful experience obviously matters to her mother. “I want her to see that I do work for my money. It is glamorous in a way but you do not really understand the work that is involved, especially with a long-term relationship like this. It is not all fabulousness,” she adds with a smile.

As easy as it would be for Crawford and her businessman husband Rande Gerber to give their two children – they also have a son named Presley – a gilded existence in Malibu, California, it is important to the couple that their children are engaged with the real world. “Rande and I try to reiterate to our kids that when you are given a lot, a lot is expected of you too,” she says. “We started a charity bank account for them. Each Christmas they have to decide where they want to give the interest. They have to make compelling arguments. It gets them thinking at a young age.” These are busy times for the Crawford-Gerbers. Kaia, meanwhile, took part in a fashion shoot for Teen Vogue. And Gerber launched another business brand last year, a sipping tequila called Reposado, with his liquor business partner, George Clooney.

The pair reportedly developed the drink over “late night research sessions”. “Oh please!” Crawford says, with a roll of her eyes. So was it just a couple of guys sitting around drinking? “Yeah,” she replies. “It is because we have houses in Mexico right next to each other and that is kind of where the idea was born. “They just developed a house tequila for us. They called it research but I think they had a lot of fun doing it. You can drink it on the rocks and you don’t get a hangover,” she beams. Even when it comes to drinking, Cindy Crawford is a professional.