The man who built America's most expensive home

In an exclusive interview, LA-based property tycoon Bruce Makowsky reveals how (and why) he built a $250 million private home

At the annual World Economic Forum meeting in the snowed-in Davos earlier this year, Oxfam delivered a chilling report. It stated that the world’s eight richest billionaires, many of whom were present at that summit, had a combined wealth equal to 50 per cent of the world’s population. While that might make many balk at the economic inequality in distribution of wealth, others like handbag-maker-turned-real-estate-tycoon Bruce Makowsky sniff opportunity. The LA-based developer builds homes for billionaires. In January, he listed the 924 Bel Air Road mansion for a price tag of $250 million, making it the most expensive home ever listed for sale in America.

“If you look at the amount of wealth that has been generated in the last 10 years, it is unsurpassed. There are more billionaires every single year, and every billionaire has more money than they had the year before,” says Makowsky from his office in LA. 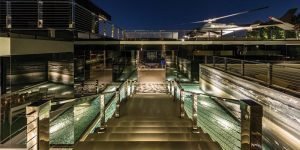 It’s easy enough to picture a million-dollar pad, but what does a $250 million home look like? Predictably, it’s sprawling across 38,000 square feet, has 12 bedrooms, 21 bathrooms, five bars, three kitchens, a spa, a mini golf course and a gym. The house comes with a full-time staff of seven, including a chef, a fitness instructor, house manager and security, all of whose salary has been paid for by Makowsky for the next two years. There are two fully stocked champagne and wine cellars as well as a full-length bowling alley. “We have some of the craziest entertainment you can ever get,” says Makowsky in reference to the 40-seater Dolby Atmos indoor theatre and the 18-foot-wide hydraulic screen that alone cost $2 million and rises from the edge of the 85-foot infinity pool.

But it’s the accessories that add serious value to the property. There’s a helicopter on the roof that comes with the house, as well as a $30 million car collection comprising brand-new and classic cars that will also come with the house. These include the $2.5 million Pagani Huayra, a Bugatti Veyron special edition that’s worth over $3.5 million, and a couple of vintage cars including a 1936 Mercedes 540K valued at nearly $15 million. 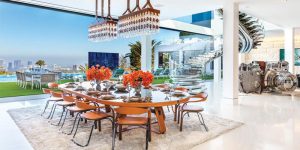 Makowsky wasn’t always in the real estate business. He spent much of his career in fashion, which he believes he excelled in. “The women’s fashion business is really exciting. I was in it for over 25 years, designing everything from jewellery to handbags to footwear. It was wildly exciting to build three big accessory companies, and women loved to wear the things my team designed,” says Makowsky.

The transition to developer happened less than a decade ago. Makowsky, having already made a fortune in the accessories business by then, was used to mixing in circles where private aircraft hops and mega yacht parties were the norm. In fact, it was the concept of a mega yacht that inspired him to create these high-end homes. “Seven or eight years ago people would pay $60-70 million for a 100-foot yacht. Today, there are over thirty $200 million-plus yachts under construction. The people who buy them are staying on the yachts for eight weeks a year, paying $10-12 million in maintenance annually and they stay in homes that cost $30-40 million. So it really doesn’t make sense to spend that kind of money on a toy when they don’t have those same amenities in their home. No one’s really curated homes to the same quality and level of these mega yachts.”

It took him four years and a team of over 300 people to build the property sandwiched between Bel Air Road and Nimes Road, with no specific buyer in mind. “I get to travel around the world and work with the best super high-end luxury bespoke designers and curate one-of-a-kind pieces,” says Makowsky. With his keen eye for design, he spent a great deal of time curating over 130 pieces of artwork and installations across the home. “About 15 per cent of the art in the house are bespoke pieces created by my team just for the apartment. The remaining is from what I’ve seen and collected from exhibitions like Art Basel, as well as from all over Europe.”

To understand the mental make-up of a man who says that he didn’t have a ceiling to the budget he would spend when building this home, you need to understand where he comes from. “I’m one of these disruptors who believes that change is great. If you let people say no to you all the time, you won’t get anywhere. My parents taught us that your time is your most precious asset, so work hard but play harder. If you’re going on vacation and you’re going to have a good time with $1,000, take $2,000 and have a great time. I’m the kind of person who has always been all-in. 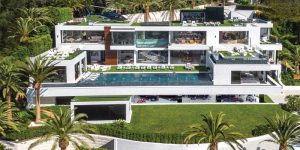 “Luxury to me is that it’s just the best. I don’t care if you’re eating a great cake, buying jewellery or a home – it always comes down to quality. If you do something of really good quality, there’ll always be a buyer for it. You can’t take shortcuts. Super wealthy people want the best quality and that’s been my driving force. Most billionaires have more money than time and they can look at a big account or they can live life. This isn’t a rehearsal, this is real life – and if you have a lot of money, you should enjoy every second.”

Although Makowsky is from New York, he moved to Southern California six years ago, at a time when he began to make serious in-roads in the property business. It was the Los Angeles market that specifically piqued his interest. “LA is completely undervalued. If you go to Monaco, London or New York, you’re going to pay $10,000 a foot whereas you can come here [LA] and pay $4,000-5,000 a foot. LA was built in the Forties and Fifties and it’s going through this renaissance where it’s being rebuilt. So almost every street in the Platinum Triangle of West Hollywood, Beverly Hills and Bel Air is being rebuilt. LA also had the most new build super high-end [home] sales in 2016 and I think that’s going to continue.”

The $250 million price tag is unlikely to be a deterrent for the super wealthy. Reports indicate that Makowsky had over half a dozen enquiries for the property on the same day that he listed it. “This is the ninth new home that I’ve built. We’ve had an overwhelming response with appointments lined up for the property. The last three houses I sold were all to billionaires from outside the US. I think that there will always be buyers for the super high-end market, provided that people do not produce too many of any one thing. What I’m doing here is one home every two to three years. It’s not like I’m building 25 new $250 million homes.”

If you thought that Makowsky would rest easy after this sale, you’d be wrong. “I have two more projects coming up that will be bigger than this house and more expensive. I believe that in the next 10-15 years, you’d see homes sell for over $1 billion.” Did Makowsky just let slip the price of his next listed project?