In conversation with Andy Palmer

“When I was 14 years old I had a poster of an Aston Martin V8 Vantage and Debbie Harry on my bedroom wall. I never got with Debbie Harry, but two years ago I did buy a V8 Vantage,” says Andy Palmer, CEO of Aston Martin, in a refreshingly candid conversation. Palmer, along with Aston Martin’s design director Marek Reichman and Red Bull Racing F1 prodigy, 19-year-old Max Verstappen, unveiled the Aston Martin Valkyrie concept (formerly known as the AM-RB 001) hypercar in Dubai towards the end of last year. Jointly developed between Aston Martin and Red Bull Racing’s CTO Adrian Newey, great things are expected from this machine: When the car is pressed into production by 2019, it is expected to be the fastest car in the world – perhaps as fast as an F1 car. Here, in an exclusive interview with GC, Andy Palmer details his plan for the car, his company and the brand that’s as British as Bond himself.

It’s the car that will define this decade. The AM-RB 001 breaks so many boundaries and rules – it’s as fast as a race-trimmed F1 car around Silverstone and capable of 4g lateral forces. It’s redefined for me the many rules that I had designing motorcars in my career.

How many will be made?

There’s going to be 150 of them on the road – and they’re already all sold out. This car is four times oversubscribed. In addition, there’ll be 25 track cars, so a total of 175 will be built. It won’t though be the last exotic car we make.

What are the vetting procedures to determine who gets one?

I decide. There are criteria like how long you have been with brand, what kind of cars you have bought and then we have an algorithm that spits out a number. But we don’t follow it blindly. We also look at the passion of the individual, how the car is going to be used – will they simply sell it on or stick it in a museum? It’s a little like having 150 daughters and you’re trying to find the best husband for them – it’s not about who is the richest guy, but rather the treatment of our child. 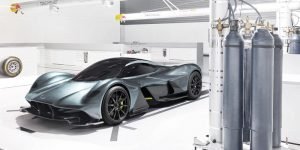 Aston Martin Valkyrie, formerly known as the AM RB-001, is jointly developed by Aston Martin And Red Bull Racing.

Tell us about the first batch of the Aston Martin DB 11 that are presently en-route to the Middle East.

The Aston Martin DB11 is in production and should be arriving in Dubai shortly. The DB is the backbone of the company, it’s not the highest volume car – we don’t value volume as the maximum number of cars we make in a year is 7,000 – but we expect this car to really revitalise our Middle East sales. We can already see a strong order bank in UAE, Kuwait and Saudi Arabia. Of the first 1,000 cars made this year, over 100 are on their way to the AMENA region. I conduct a 40-minute inspection on each of the first 1,000 cars manufactured and they will go with my name on the engine.

Aston Martin has recently diversified its portfolio by building its first yacht and also announced the Aston Martin Residences in Miami.

It’s all about recognising that we’re more about luxury rather than just an automotive company. We have that power to create lifestyle around what we do. Seventy-three per cent of our customers have an SUV in their garage, so we thought why not build an Aston Martin SUV. Then they have beautiful apartments, so why not build an apartment. They have boats, so why not build a boat. They’re often anglophiles who love British things, so why not put a British suit on them through Hackett. What we won’t do is theme parks, caps and cheap T-shirts. We may forego a portion of the market behind where we could earn some money, but we do that so that we could preserve this true allegiance to the love of the beautiful.

What made you leave Nissan and come to Aston Martin two years ago?

I loved Nissan, I was there 23 years. But my frustration was that I was never going to be CEO. There was an incumbent in the job already and I wasn’t French nor was I Japanese. There was a degree of resignation at that point that I would have to sacrifice my dream [of becoming CEO] and I had just turned 50. At that point, Aston called me. It meant me basically going back to 5 miles away from where I went to school, really going back home. It was an independent British company in a little bit of trouble and I wanted to give something back to the British car industry. I’d spent my entire life – 37 years in the car business – training for this one moment and made the move.

Looking back, what advice would you give yourself on the first day on the job in the car business?

The 3rd of September 1979 was the day I started working. If you want to do well in the car business you have to be prepared to work really hard. The car business is a punishing mistress and sometimes those sacrifices are quite hard when it comes to time with your kids, divorce and that kind of thing. There have been times through my career that I didn’t always realise when I was hurting my family and probably if I was going back I’d say to myself, ‘When you are with the family – and it’s a limited amount of time – just make a little more effort.’ And I’m learning that now as my kids get older.

Tell us about your six-year plan to turn around the company.

We’re two years into my tenure and one-and-a-half into that plan. We will go into profitability before six years. The key is profitability and then creation of free cash flow so that you can fund your future, and then ultimately it’s about value creation. The way that it’s constructed with the shareholders is that they’ve given me everything that they need to give me, and the responsibility for execution is entirely with me.