For Diego Della Valle, the owner of the luxury leather brand Tod’s, famous for its driving shoes studded with distinctive rubber nipples, the Italian dream is not just a way of life. It is also a way of doing business. The 63-year-old luxury titan is one of Italy’s most dynamic businessmen. With his swept-back white hair and signature upturned shirt collars, he is as recognisable to Italians as Richard Branson is to Brits.

Della Valle has built a billion-dollar footwear and fashion empire, flies everywhere in his private jet or helicopter (one passenger likened its interior to the inside of a handbag), owns the Fiorentina football club, has an enviable contemporary art collection, is the custodian of John F Kennedy’s mahogany motor yacht, Marlin, sits on the board of Ferrari and LVMH and is funding the restoration of the Colosseum. Forbes estimates his wealth at more than $1.7 billion and yet there is no place he would rather be than the eastern Italian town of Casette d’Ete.

In the Marche region, it nestles on a fertile plain overlooking the Adriatic Sea. The area is known for its shoemaking, with more than 600 leather factories producing the kind of handmade designer shoes that have made Italy a global fashion powerhouse. “The market is everywhere in the world,” Della Valle once told an Italian journalist, “but life is in Casette d’Ete.”

Casette d’Ete is unofficially known as Tod’s Town: 900 of its 4,000 inhabitants work in the Tod’s factory and those who do not still send their children to the immaculate primary school Della Valle built. He also refurbished the community centre and built a free creche for his workers, which is unusual in Italy. He sees his utopian approach as natural: “We are in the community and the people support us a lot. It is the nature of our family to do that. It is not a big sacrifice. We move one finger and we support a thousand people who struggle.”

Della Valle grew up in Casette d’Ete. His home and gleaming white marble state-of-the-art headquarters, designed by his architect wife, Barbara, are also in the town and it is where he raised his two sons, Emanuele, 40, and Filippo, 17, because he wanted them to have the same kind of childhood as he did. “It was an easy and happy life because for us the village was like Disney World,” he says of the warm days spent playing football with friends and fishing in the river. 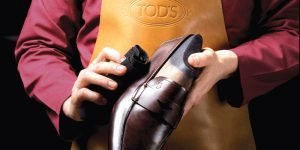 Della Valle’s grandfather Filippo started his shoemaking company in the 1920s. When Diego’s father Dorino took over, he began producing shoes for the big American department stores, turning the small artisanal business into a flourishing success. Della Valle remembers growing up in the factory, his childhood perfumed by the fragrance of leather. “I close my eyes, I remember the smell,” he says as we sit at a vast oval table in his glass-walled office.

Even when he went away to Bologna to study law, he spent much of his time with a local cobbler. “Every afternoon, I would sit down close to him to watch what he did. He was a very good teacher. I would stay with him and speak about everything – football, life, politics. I loved it,” he says.

When, in 1975, it was his turn to join the family firm, he had his own vision. Instead of making shoes anonymously for American stores, he started the Tod’s brand and quickly built a reputation for quality and easygoing luxury. Princess Diana was a fan and Sharon Stone made Tod’s popular in America. Since then, the Tod’s empire has expanded to include Fay, Hogan and Roger Vivier and Della Valle has also reanimated the dormant couture house Schiaparelli.

Tod’s is going places but everywhere in the factory there are reminders of where it came from. Filippo’s wooden workbench and tools are displayed in pride of place at the entrance to the factory floor and pictures of Dorino smile down on the employees. Many of them still use the machines he designed to make shoes. The most important thing Della Valle’s parents taught him, he says, is “you win if your product is fantastic” and his role as chief executive, he believes, is to safeguard the DNA of the brand.

On the day of our interview, he is holding one of his regular meetings with the company’s womenswear designer, Alessandra Facchinetti. She is showing him her designs and without his approval nothing gets made. He sees Tod’s as a lifestyle brand, not a fashion brand. “I want luxury, but also a useful product. It is important to balance the point of view, because many companies make things that are very cool but not useful and many make things that are useful but boring.”

Tod’s products might be stitched, glued, polished and packed by hand, but they are comfortable enough to wear every day. Their sporty elegance fits with what Della Valle sees as the modern luxury lifestyle. “It is what I call the light life – light food and houses without too much furniture. Everybody tries to simplify their lives,” he says. His own life revolves around Casette d’Ete. “When I am here, I am the number one,” he says of his vast factory. “But when I am in the small village, I am the number 100. I love that. This is the reason I live here. The balance is precise. If you have dignity, if you are serious, the people will respect you. They do not respect you because you have money.”

The town is full of Della Valles, many of whom work for him. He runs the company with his younger brother Andrea and a cousin takes me on a tour of the village, where Diego takes pride in knowing almost everybody. “There is the new generation. Maybe I do not know all of them but I recognise the DNA of their family,” he says.

Living in his home town keeps him in touch with reality, but Della Valle has more unconventional ways of doing that too. He and a close friend – another famous Italian industrialist he will not name – hire movie make-up artists to disguise them. “My mother would not recognise me,” he chuckles. Then the pair go out to their usual haunts, even visiting Tod’s shops in disguise. “It is fantastic. You go along in the city, get a coffee and nobody bothers you. The only downside, he says, was when they visited their favourite restaurant and were given a terrible table. The bill, however, was much smaller than usual.

There is no disguising how charismatic this Italian billionaire is. We tour the vast leather room where hides are stored and checked for quality and he poses for a photograph with his workforce. He knows all their names and chats and jokes with them. It is typical of Della Valle. What is Tod’s all about? I ask. “Success, power and solidarity,” he says. And the Italian dream.