The Abdulrazak sisters broke the mould with their all-female family business, the Sisters Beauty Lounge, and they are as tight as their brand name suggests.

When they were little girls, Rasha, Hind and Sara Abdulrazak were masters of manipulation. They would often arm-twist their Emirati father into taking them into his furniture company offices instead of school. Perhaps it is a sign that they were always cut out to be high-flying business leaders because two decades on, they are at the helm of Sisters Beauty Lounge, an empire that has enjoyed a fast-paced trajectory.

Together with their Iranian mother Shirin, they have overseen its expansion to 10 outlets under three different brands and a burgeoning number of franchises. Collectively they preside over a staff of 250. “We have been raised with entrepreneurial parents since we were born,” says Sara, now 29. She is the youngest of the three; Hind is now 31 and Rasha 33. Their father, she says, was “so easily swayed” when they were younger. “My mum would call him and be like, ‘Why am I hearing the kids in the background—why are they not at school?’ ” “We were persuasive salespeople even back then,” chimes in Hind.

Shirin, a lifelong entrepreneur, started Sisters Beauty Lounge in Dubai in 2004 and her daughters joined one after another. The matriarch of the family studied fashion design in Paris and showed her entrepreneurial streak when she started the first UAE uniform business in the 1980s. Her daughters, exposed to business from an early age, spent their school holidays helping out in this store. Sara says: “I loved to be in the office and to sell to customers. We were always in and out of their businesses growing up without realising we were part of the business operational structure.” 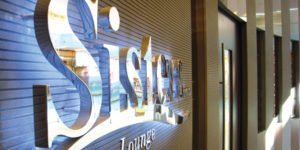 Without a male heir, adds Hind, they were natural successors to their father’s portfolio. “Culturally passing a business on to a boy is very important,” she says. “We are three girls so naturally our father passed it on to his daughters. He had no boys. That was a catalyst to bringing us up in an environment of business, which a lot of girls would not have got the chance to do.”

So strong is the Abdulrazak entrepreneurial gene, say the sisters, that even when their parents dropped two of them off at university in Boston, where they both studied at Bentley University’s business school, they came back with a franchise for the Bombay Company furniture store. Despite the environment they grew up in, there was never any pressure to become scions of the family companies.

“There was absolutely no expectation we would join the family business,” says Sara. “Our parents wanted us to do our own thing and get our own experience and learning and the life lessons we needed.” All three women joined large semi-governmental businesses first. Rasha started working for Dubai International Financial Centre, Hind joined Emaar, where she stayed for six years, becoming the last to join the family company in 2011 and Sara spent two years with Tecom Investments.

The family dynamic has helped them be brutally honest with one another. “If you are working with colleagues there is always a bit of you that cannot say exactly what you mean and if you do, it can be taken the wrong way,” says Hind. Sara adds: “With family we can be a bit more blunt. You can have very open conversations and discuss every detail of your business.”

But they are careful not to bring work home with them and have a strict no-business-at-the-dinner-table rule. “We have also set the company up so we are not stepping on each other’s toes. Our mother is without a doubt the visionary and can be a bit eccentric, Sara is business-minded and brings her down to earth. I am a little more on the creative side,” says Hind.

Rasha, who is now juggling four children, acts as a sounding board and mystery shopper. Her children are also going to be testers for their newest child-focused company. The women have been canny spotting gaps in the market. The Sisters Beauty Lounge was the first salon in Dubai to provide multiple services—hair, nails, massage, waxing services—all under one roof.

In 2012, six months after she joined, Hind spearheaded the opening of Caboodle, a ‘play and pamper’ space aimed at children and young people. The business offers spa activities, workshops and a cafe catering for the whole family.

This has meant overwhelming interest from potential franchisees, with about 10 inquiries a week initially. A branch is expected to open in Qatar while Sisters has a franchise in Kazakhstan at the behest of an eager client. With so many irons in the fire, the women are showing no signs of resting on their laurels just yet and are hoping “to take our brand from the Arab world and send it out there – instead of the other way around, which tends to be what happens.”