The daring brewery in the heart of Palestine

Running a brewery in the Palestinian Territories isn’t an investment for the fainthearted.

There were probably easier career paths Alaa Sayej could have chosen. But the Palestinian finance and business management graduate had just one passion when he finished his masters degree in Preston in the north of England. Having discovered the craft brewery industry, he decided to brew beer in his native Ramallah in the West Bank. “Distillation was my hobby,” says the 27-year-old. “I made arak, vodka and beer and I became interested in English beer.” 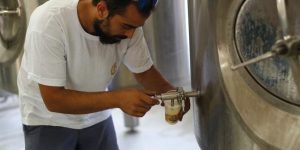 There were multiple challenges in setting up in Birzeit, the largely Christian neighbourhood which lends his company its name. Not only was there the taboo of brewing alcohol in the Muslim majority West Bank but numerous obstacles to operating as all the ingredients have to be imported via Israel, with checkpoint hold-ups, permits, government interference and bureaucracy creating a logistical nightmare.

Sayej, who comes from a wealthy Christian family, was determined. Through a combination of loans, savings and parental investment, he accumulated $1.5 million dollars and founded Birzeit Brewery with his younger brothers Aziz and Khalid with the slogan ‘brewed by brothers for friends’. “For the money I could have bought a hotel in Spain but I decided to stay here in my country,” says the young chief executive. “My country gave me a lot. I owe it. All my friends and family are here. Plus, it is a virgin market. The only way is up.”

It was a long, slow haul to start his business, he adds. “We established in November 2013 but launched the product in the market June 2015. It took us three years just to get everything together. We had a bad time. “They don’t supply us with trash cans outside. There is no sewage system. They do not want to give us infrastructure. The situation in [the Palestinian Territories] is terrible. It is occupied. All the logistics make it 400 per cent harder than anywhere else.”

Sayej searched for jobs in the financial industry when he returned to the Palestinian Territories. After finding few opportunities, he made the decision to capitalise on the passion cultivated during his university years and open a brewery. He took a short brewing diploma, visited breweries in the Czech Republic and singlehandedly drew up plans for his fledgling business. His parents were surprised but ultimately supported him to the tune of a couple of hundred thousand dollars.

Birzeit Brewery’s Shepherds beer is already gaining a following with its slogan ‘a beer a day keeps the problems away, Palestine’. According to law, he should be allowed to trade and produce alcohol without government interference but constant delays and the stigma of producing a ‘haram’— or forbidden — substance mean he has to overcome obstacles from both Israelis and local officials. He plans to launch a non-alcoholic version, a product popular across the Arab world. 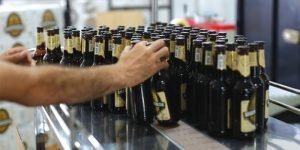 Sayej also faces competition from the older, more established Taybeh brewery in the West Bank — the Palestinian Territories’ only other craft brewery, which was opened in 1994 — and about 15 imported brands. Yet when he began selling his beer, despite trading for less than six months, orders from Italy and the US have started trickling in, leading Sayej to label the venture a success, given demand outstrips supply.

He credits the small company’s work ethic and hiring policy for the growth in profits. “I have 11 employees, including myself,” he says. “We all do everything. I’m not a typical CEO. I do the marketing. My youngest brother is the brew master. We do not care where you come from or what you believe, only what you can offer.”

Another unexpected revenue stream has come from the tourism sector. Holidaymakers apparently enjoy visiting Sayej’s brewery so much, he has tacked on a gift shop replete with novelty tee shirts and discounted cans of beer. “We have a minimum of 40 to 70 visitors each week,” he says. Sayej already brews pilsner pale lager, English ale and stout while a Christmas ale, wheat beer and summer ale are in the pipeline.