Mohammed Alshaali’s family superyacht business operates in one of the world’s most expensive and competitive industries. He tells GC why going public is the only way to survive

Mohammed Alshaali was born on the beach. It is perhaps little wonder, then, that he himself gave birth to a formidable global boat manufacturing business.

Gulf Craft, based in Ajman and Umm Al Quwain in the UAE but also with operations in the Maldives, recently picked up the trophy for the best shipyard in the yachting world at the Cannes Yachting Festival. The gong follows many others after humble beginnings in the industry 32 years ago.

“For our generation, the sea was not only a source of living for our family but also a source of all kinds of play,” says Alshaali. “We always looked beyond this water because there was nothing here, just sand and water for us.”

Each year the company builds 400 mostly bespoke boats, costing from just under $28,000 up to nearly $22 million – something Alshaali estimates represents the largest price range of any one boat manufacturer in the world.

Gulf Craft is certainly the leading company in the region and exports about 70 per cent of its products to more than 40 countries around the world.

The elderly statesman, the co-founder and chairman of this family business, says boating is in his blood.

“We originally came from a fishermen and pearl diving family. Literally, I was born on the beach.”

Born in Ajman, the country Alshaali grew up in is vastly different to that of today.

He began making small, seaworthy boats from disused metal and gauze, held together with tar, with friends from about the age of six.

“We have this history,” he says. “My father was a captain who drove a boat to Africa when he was 18 so it runs in the family.”

For his generation, the sea was the source of food, enjoyment, creation and of employment.

But there was more to this genial Emirati than simply being a fisherman. He spent much of his life in the United States, where he acted as the UAE’s ambassador to the United Nations. His children, one of whom, Hussein, now works alongside him, grew up in New York and Washington DC.

All the while, Alshaali senior had Gulf Craft as a “sideline”.

“Everybody thought manufacturing in this part of the world was just a crazy idea. No bank wanted to finance it.”

He says for the first 20 years, neither he nor his co-founders – his two brothers and a friend – took any salary from their start-up business.

“At that point we were enthusiastic as young people who wanted to do something. It was mainly passion. We were taking our salaries from the government and going and paying it to our workers.” 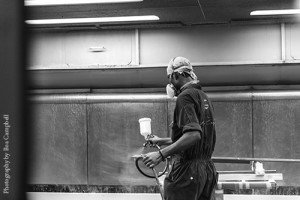 Alshaali says even during the economic crisis, just five years after the launch, Gulf Craft continued to thrive – even though customers stopped buying luxury products when the crisis hit.

“We had an annual party here and people were worried they would lose their jobs,” he says. “I told them: ‘We are not going to sack anybody. Instead, we will give you an increment but I want you to do something else. All of us [should] think what will happen after the crisis – let’s prepare’.”

And so they did. Alshaali says during this time, his team brainstormed ideas for some of their most successful, award-winning crafts.

Looking after staff is one of the most important ways to create a successful brand, he says.

“I know everybody in the company by name. I work with them down on the floor. Everybody still walks up to me for advice or problem or solutions.”

The profits are shared, Alshaali says, so the workers have good accommodation, transport and work parties to feel “part of the family”.

Gulf Craft is also concerned about the environment and uses environmentally-friendly technology where possible.

The company has corporate social responsibility [CSR] programmes to recycle nearly a third of its waste and clean up the Umm Al Quwain creek and nearby beaches while there are generous training offers for local students. The firm even offers to pay the university fees of those eager to study marine engineering. Unfortunately it has not been a popular scheme to date.

The family element of the business is also important, Alshaali says – culturally as well as economically as family members know controlling costs is paramount.

“Because it is a family business, we have no expense which is unneeded. We can actually produce a similar yacht or probably better than the competition at a lower cost.”

Everyone in the firm, no matter what rank, flies economy class.

“In luxury business, some companies will have their own private jet, their large villa, [but] who is paying that cost? The customer. We do not think our customers should pay for our pleasure.”

And while having a family business helps create a strong culture, Alshaali says this is a balancing act. There are too many family-run businesses in this part of the world, which can cause problems when the next generation takes over.

“I personally believe a company in the future should go public to keep it sustainable, especially in our system [where] people fight after the founders die and sell the business. This kind of business needs passion.

“I believe we created this business for the country, not for us, so it has to go public because we want to see it grow even after our lives.”

A strong industry with good companies, he says, should become the backbone of every economy.

“Personally I believe industry is the way [forward] for all nations.

“I think the future will be technology and industry because that is added value. We cannot have agriculture here, our natural resources are oil and that’s limited. Trade is all services …you need production centres supported by all services.”