The chief executive of British leather goods manufacturer Ettinger says new markets are opening up thanks to its royal warrant.

Robert Ettinger is the third generation to run his eponymous family leather goods business. Ettinger has become known for its exquisite handmade products, from wallets and key fobs to desk blotters. Its chief executive now has ambitions to take this quintessentially British product to the rest of the globe.

Ettinger products are still made by hand using the same methods the company has used since its inception in 1934. Robert’s grandfather Gerard operated out of a workshop near Smithfield Market, the traditional centre of leatherwork in London. Ettinger only abandoned the St John’s Street workshop about a decade ago, one of the last leatherworkers to do so. Currently, most of the manufacturing is done by women in a factory outside Birmingham. 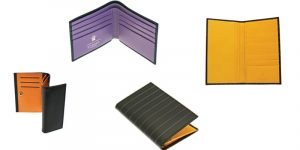 “We have always employed women. They do the really fine work because they have a different feel for things. Some of them go on to have families and continue to work from home,” says Ettinger. He joined the business in 1990 after working abroad in Canada and Germany where he “worked for bosses other than my father and where I wasn’t mollycoddled,” including some time in the factories. It is because of that experience that he rotates the workers’ assignments so they do not get bored and “that keeps the quality at 100 per cent”.

And although the production might have stayed the same for 80 years, the business has changed immensely and grown steadily internationally. Japan is a huge market with 85 per cent of stock exported there. The only stand-alone Ettinger store in the world is in the Ginza district of Tokyo. In the Middle East, the product is sold in Rivoli, Bloomingdale’s and Harvey Nichols.

The brand’s popularity is also due to its status as a royal warrant holder, a prestigious designation for tradespeople who supply goods or services to certain royal personages. “After the royal warrant, we looked at building the brand much more,” says Ettinger. “We started to travel overseas and the business grew organically from there. It means something if the royals buy it. Now when the royals travel, any leather gift they give is an Ettinger gift. So Ettinger has become a sort of cultural export, the best of British heritage.”

Ettinger found out Prince Harry and Prince William have started using the products as well as their father, Prince Charles. “The boys are young and much hipper so that is good for us as well,” he says. As the business continues to appeal to a new generation, the company makes sure it preserves its roots with little touches, like using the colours of a £10 note on the signature visiting card case.

“Sometimes the look is actually quite avant garde and contemporary but there is always a historical basis for why something is produced and we will give it a modern twist,” he says.