Montegrappa CEO Giuseppe Aquila is writing the second chapter of the independent storied Italian brand that has been returned to the family fold.

On the shores of the idyllic river Brenta in the city of Bassano del Grappa, an hour’s drive from Venice stands a factory where it’s been business as usual for over 100 years. One of the world’s most prestigious manufacturer’s of writing instruments, Montegrappa, has been making pens used by a range of celebrated individuals from novelists including Ernest Hemingway to Pope Benedict XVI. What’s made the success of this company remarkable is that within little over a century from when it was established in 1912 until now, it has survived world wars, economic depressions, and more recently a passing of ownership from family-owned to conglomerate-managed and back to a family-owned business – without showing signs of any stresses that such volatile activity would typically inflict. Instead, the brand is in rude health.

The rise of Montegrappa from a niche Italian manufacturer to the global stage began in 1992, when Giuseppe Aquila, joined his family-owned business. The young Aquila had just started his own family, and was brimming with enthusiasm to shake up the status quo. “One of the first things I did was to ensure that Montegrappa really focuses on the luxury business. Luxury wasn’t a word that was used much at that time. We needed to make things that are high-end, things that are really exclusive.” Not only did he deftly reposition the marketing direction of Montegrappa, but he also unwittingly pulled off another coup – the cult of the limited–edition. “ Being a small company our capacity was limited. So the idea of limited edition didn’t come from the idea of making something exclusive to give it added value, but because we did not have the capacity to make more. In 1992, to celebrate our 80th anniversary we made our first limited-edition pen. We saw that was a very good direction for the business and then we of course capitalised on it.” Today, estimates peg Montegrappa’s limited- collection to account for nearly half of all its sales, where the price for a single one such as the Ultimate Centennial Dragon can rocket up to a million dollars.

Shortly into Aquila’s role at Montegrappa, Richemont – the mega watch and jewellery conglomerate – began to make offers to buy the business. “The Richemont group started approaching us since 1995, always making better offers. There were five members of the family involved in the Montegrappa business and they each had an equal – 20 per cent – share in the company. Not all the members of the family were equally involved in the business so when the offer became attractive in 2000, there was a majority that decided to sell the business – I wasn’t part of that majority.” Still, it was Aquila who had to stay on with the Montegrappa for the next two years under the Richemont management to complete the handover. 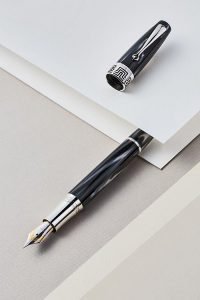 His time there gave him a unique perspective on the pros and cons of running a family business as opposed to working as part of a multi-national behemoth. Post his stint at Richemont, Aquila didn’t exit the luxury pen business altogether – he and his father acquired and operated another storied independent Italian pen manufacturer called Tibaldi.

It took the great financial shake-up of 2008-2009 for Montegrappa to fortuitously return to the Aquila family fold. “In 2008, I met with Norbert Platt, the then CEO of Richemont and former president of Montblanc, at a charity event. 2008-2009 was a difficult year, and at that time Montblanc was in charge of Montegrappa. Nobert said, ‘Why don’t you consider buying back Montegrappa as we want to concentrate on Montblanc.’ From there we started the process of negotiation and six months later my father and I bought back the company.” Among the investors in that effort to buy the company back were Hollywood’s Sylvester Stallone and ex-Ferrari F1 driver Jean Alesi.

The entrepreneurial and business chops of Aquila were once again proved when after wrestling back control of the company in 2009, he decided to take it down uncharted territory. The first was to diversify its product ranges from merely pens to much more. “We wanted to make Montegrappa a lifestyle brand – so we introduced watches, cufflinks, fragrances, leather good and ties.” The second was to make the brand truly global. “We started to open mono-brand boutiques in the world – today we have 13 boutiques globally. We have a very good presence in the Middle East, with as many as 40 shop-in-shops and it’s one of the main markets for us. We now export to 75 countries.”

Part of the strategy since has also involved making Montegrappa a contemporary brand. It meant debuting pens like Chaos designed by Sylvester Stallone, making special edition pens for Naomi Campbell and Paulo Coelho as well as clever licensing deals by way of limited-editions in the ICON series that were a nod to Frank Sinatra, Bruce Lee and Muhammad Ali. Co-branding exercises included pens made in association with Bentley and Bugatti that used materials like carbon fibre, titanium, magnesium and even leather.

The Montegrappa 2.0 phase hasn’t been without bumps. “The war in Ukraine had a substantial impact on business – at that time, Ukraine was our fourth biggest market and Russia was our second market. Together they represented about 30 per cent of our business. Overnight, the Ukraine market disappeared completely and it’s still not on the map. The Russia market was hit with the devaluation of the rouble. Recently though, he says, he’s seen “signs of a recovery.”

The near-term plans are to expand the brand’s global footprint, the new boutique in The Atlantis in Dubai being a prime example. Long term though Aquila’s focused on what he terms as the ‘duty of a luxury brand’. “There’s a lot of craftsmanship involved in our business and you don’t easily find people with this know-how. It is the duty of luxury brands to guarantee continuity by training the new generation of craftsmen.” And a new generation of businessmen who can pick up the mantle like Aquila has may also be on order too.