These Lebanese-Canadian sisters bought a Swiss biotech company for a dollar in 2007 and turned it into a multi-million dollar business.

A dollar doesn’t go far these days, but Lebanese Canadian sisters Irma and Carla-Maria Khanjian managed to stretch it farther than most – the entrepreneurial duo were employees in a biotech company for five years, prior to buying it out from shareholders for the equivalent of just a dollar in 2007. Since then the sisters who both have a background in economics, have turned the pioneering biotechnology firm into a multi-million dollar company that is making waves in the cut-throat cosmeceuticals industry with their three-product anti-oxidant skincare line, aptly named La Peau, or skin in French.

As CEO and president respectively, Carla-Maria and Irma operate BeFutur Biotechnologies Suisse, out of Montreal and Geneva where they each live. Despite their global operation spanning two continents, they say they run a “lean business” with only themselves as full-time employees. “Our titles are merely formalities,” says Carla-Maria because in reality, the sisters do everything from packaging, to wrapping to strategising and marketing their triad products, manufactured in Geneva under the guise of the all-important Swiss seal of approval.

Speaking from her office in Montreal, Carla-Maria who says she typically works 14-hour days with her only luxury being time out to enjoy a morning run or swim, quips that they accidentally stumbled into their entrepreneurial journey after the founder of the stem cell and tissue engineering company, BeFutur Suisse, where the two sisters held executive positions, was ousted. 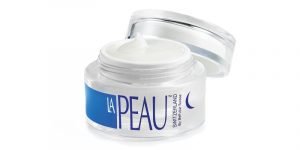 “Organic is sexy but you need science. You cannot do it organically.”

“I had just returned to Montreal, after three years in Shanghai – opening up the Chinese branch of a Canadian chemical company and Irma who was already living and working in Geneva at Befutur Suisse encouraged me to join them so when I was offered a position by the founder during a trip to North America, I accepted it. “It was at a time when all the hype was around stem cells and all that they could do to cure diseases,” says Khanjian. The sisters who immigrated from their hometown of Beirut first to Athens and then on to Montreal in 1989 with their parents to escape the Lebanese civil war, worked in research and development for the company alongside a prominent Stanford university educated scientist who was in the process of developing a liquid to harvest cells which were void of any animal substances or hormones.

“The idea was to commercialise this liquid by selling it on to pharmaceutical companies.” However, when the scientist noticed that skin cells were thriving using this medium (liquid), which was the food nutrient of the cells, he suggested that they should apply the formula to cosmetics. “Within six months, he had come up with a formula [that could be used in a face cream] that we sent out to independent laboratories across Europe to test,” recalls Khanjian, whose voice is remarkably elevated as she recounts the story. “To our surprise, they all came back to us months later and told us the same thing; that your anti-oxidant properties by far outweigh the leaders and you should consider starting your own line.” The sisters didn’t just take their word for it; they resent the formula to multiple labs for testing. They were so enthused by the outpouring of positive feedback, that the enterprising pair took the idea to the shareholders but at the time, the company had hit some internal financial troubles culminating in the ousting of the founder, but rather than drop the idea, they spun success by negotiating a deal that saw them buy out the 14 shareholders for just one Swiss Franc – on the premise that the shareholders would recoup 10 per cent of net profits after tax within a ceiling of $1 million. And overnight, La Peau, the touted revolutionary skin care brand was born.

“We inherited the proprietary technology with the company and we became owners overnight but neither of us had any clue how to market this product.” And with no budget for advertising Irma and Carla-Maria relied on their well-to-do network of friends from “the health club”, which included Swiss dermatologists and Beverly Hills plastic surgeons to spread the word. One of their early successes was convincing Dodi Kazanjian, Vogue Contributing Editor and director of Gallery Met at the Metropolitan Opera in New York to try their products. “A mutual friend told Irma that we should call Dodi so I did when I was in New York but she told me that she didn’t believe in skincare products. I convinced her to let me drop off our three products to her office. Two weeks later she called me when I was in LA and told me that we had converted her.” The brand now has a celebrity following including Eva Longoria who tried it after her publicist read about it in Cosmopolitan magazine.

So what is so revolutionary about La Peau? “It’s our texture,” she answers simply. “It light and it’s not greasy so it doesn’t clog your pores and instead absorbs the vitamins. We have three products and they have more anti-oxidants in them than others – a day, night and eye cream, and it only takes a small amount of each to regenerate and heal the skin.” 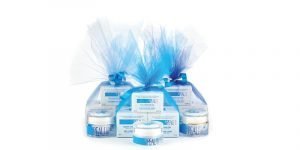 Eva Longoria tried it after her publicist read about it in Cosmopolitan magazine.

Sensing my hesitation, Khanjian adds, “We cannot sell a product that doesn’t work because we don’t have the millions in marketing. Others can maybe but we cannot.” La Peau’s key ingredient is BeCell, a non-irritating anti-aging complex that boosts the regeneration of the skin. “When we added SPF to our products it reduced the anti-oxidant/anti-aging properties by 99%, so we removed it because the product would not have worked anymore.” Khanjian who received the Ernst & Young Entrepreneur of the Year award in Canada in 2007, is equally candid about their reasons for not being 100 per cent organic. “Organic is sexy but you need science to act as a vehicle to penetrate the skin and we are a science based company. You cannot do it organically.”

Convinced that their secret to success has been their formula, which consists of one part cream and two parts gel, how do the forty-something sisters, who pride themselves on running a two-woman ship to keep costs low, protect themselves from industry heavy weights without having it patented? “As you know when something is patented you have to reveal the formula’s ingredients and we don’t want to do that. We work with several consultants and scientists who have all signed non-disclosure agreements, but regardless the formula is unique to us and its made by our scientist in his lab and is then handed over to a different factory where they make the actual products but they’ve no idea what’s in the formula,” she says.

Le Peau, which is one of the least expensive Swiss skincare brands on the market ($85 for the day cream), is stocked in pharmacies, medical spas and renowned plastic surgeon offices across the US, Switzerland, Japan and the Middle East including Lebanon and the UAE. Khanjian says the ultimate goal is to partner with larger distributors and enter flagship retail stores like Harrods in London. They are currently in talks to partner with the Chalhoub Group in Dubai, although no deal has been reached yet. “We are just two sisters, how much can we do on our own?” she asks. Well, if there negotiating skills are anything to go by, then a lot is the answer.