In Success and Defeat

Taittinger is one of a few champagne houses still in family hands although the third-generation business was almost lost.

When you have arranged to meet a famous French heiress next door to the Louvre Museum in Paris, you don’t expect to end up chatting about football. This is doubly so when the lady in question is Vitalie Taittinger, a member of a champagne-making dynasty renowned for its strong links with high art, classical music, theatre and haute cuisine.

Yet here we are, sitting in upholstered leather armchairs in the lobby of the five-star Hotel du Louvre and Vitalie, a graduate of the Emile Cohl School of Design in Lyon, is enthusing about the most popular game on earth. She is particularly keen to tell me how Taittinger came to sponsor last summer’s Fifa World Cup finals in Brazil.

“My whole family absolutely loves football and we were delighted to play such a big part in the competition,’ says Vitalie, who has lived in or around the champagne capital of Reims, eastern France, for most of her life.

“My grandfather was mayor of the town for around 20 years and during this time Reims were an exceptionally good football team. He’d go to every game possible and so would other members of the family. When my brother Clovis was growing up, he wanted to be a football commentator. He was very passionate about the game and so were the rest of us. Winning the contract for Brazil was a dream come true for everybody.”

Clovis Taittinger didn’t fulfil his schoolboy sporting ambitions but is now the export director of the family firm. Its brand was already well known in 140 countries but the World Cup involvement was a huge success. It was the first time the global extravaganza, which has run since 1930 and which now claims a peak TV audience near the billion mark, has had its own champagne and Taittinger was up for celebrating.

The firm produced a souvenir Brut Reserve bottle, complete with a World Cup trophy insignia on the label, describing it as ‘pale with a fine, strong bubble’. It was drunk in vast quantities throughout the tournament and, Vitalie confirms, “sales were particularly good in Germany” after they won the tournament in some style, beating Argentina in the final.

Vitalie was pregnant with her third child and so unable to make it to Brazil but “watched as much as I could on TV and, of course, I was cheering for France”. (Les Bleus reached the quarter finals, losing to the eventual winners, Germany, by just one goal.)

Champagne is normally associated with upmarket sports such as horse racing and polo but Taittinger’s current close association with football sums up the image of the company: it is indisputably traditional but also massively innovative.

“Yes, we keep up with the times and are always looking for ways to improve,” says Vitalie, who, despite her considerable success as the label’s marketing and artistic director, is still only 35.

“We are very much involved in sports such as horse racing and polo but we were very keen to get more involved in football. Champagne is a celebration drink associated with the luxury market but there is no reason why it cannot be popular with millions of people. Costs are very important to us, for example, as we want to make sure prices can be low enough for as many people as possible to enjoy the drink, including football fans.”

Her great-grandfather was Pierre-Charles Taittinger, who first came across the lush vineyards which are now eternally associated with his family’s name during the First World War. He was billeted in Chateau de la Marquetterie as a young cavalry officer during the 1914-18 conflict and bought it in 1932, turning it into the family estate.

Taittinger is now a highly successful family firm but it is less than a decade since it was briefly put in the control of the Starwood Group, the American private equity chain which runs numerous hotels and resorts. Some 45 members of the Taittinger extended family voted to sell the business and its affiliate, Société du Louvre, for $2.5 billion. It was Vitalie’s father, Pierre-Emmanuel Taittinger, who effectively “saved the firm”, bringing it back under the family’s full control after a “very long year” for $700 million. 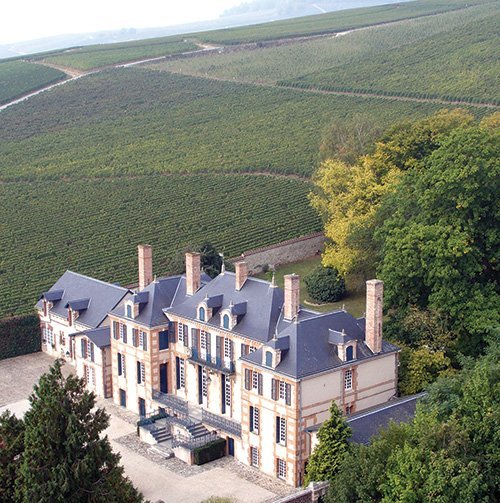 “That was a very worrying period but it is all behind us now,” she says. “What we are now certain of is how important the personal touch is to everything we do. Large corporations are not necessarily best suited to creating a product like ours. The re-purchase was solely of the champagne label, not of all the other elements like hotels, meaning we could concentrate on what we do best.”

Taittinger produces more than five-and-a-half million bottles of champagne a year, around a fifth of some of the bigger labels, but the status of a “small family firm allows us all to drive the company forward in the direction we want to go,” says its marketing director. “We can be original and creative and do not solely have to follow the economic figures. There is too much passion and history in our champagne for that.”

The history is indisputable – Taittinger is based on the remains of the Benedictine Saint-Nicaise Abbey, whose monks produced wine in the 13th century, and its vaults date back to ancient Gaul – but the label’s passion is also in evidence all over the world, including in the Middle East.

While time, nature and the silence of the cellars are all part of Taittinger’s unchanging production process, the elegant Vitalie personifies its reluctance to rest on its laurels. There are no immediate plans for her father to quit as chief executive but it is clear a Taittinger will continue to run the firm for years to come. Vitalie’s oldest child is 10 and has already had a sip of the family brew.

“Passion for champagne is certainly a family trait,” says Vitalie, smiling broadly as she admits to “drinking it all the time, as is my duty”. But does she prefer it to football? “Yes – probably a little bit more,’ she replies, laughing loudly.