Born on the banks of the Bosphorus, the Adler Family’s Fine Jewelry business is a story of multigenerational success crossing east and west.

“My grandfather used to bribe me with the most wonderful cake,” says Franklin Adler of his early and unusual introduction to the world of fine jewelry.

“He would buy me a piece of chocolate cake. Then give me gold, pearls and beads to play with while he worked. Other five or six-year-olds have lego…I played with jewels,” says the man who along with his brother Carlo, sits at the helm of his family’s jewelry business.

Franklin’s grandfather was Jacques Adler, the master jeweler and founding father of the business that still bears his name. The Swiss-based celebrity red carpet favourite built its international reputation early on through its ability to artfully blend the sensuality and colour of the east with the techniques of the west.

“We were the first when it comes to fusion!” Franklin laughs.

While Jacques had the determination and looks of a Prussian General he was an artist with precious stones and metals, Franklin reminisces. The jeweler trained in Vienna prior to returning to his home in Istanbul in 1886 to open the first Adler atelier and boutique. 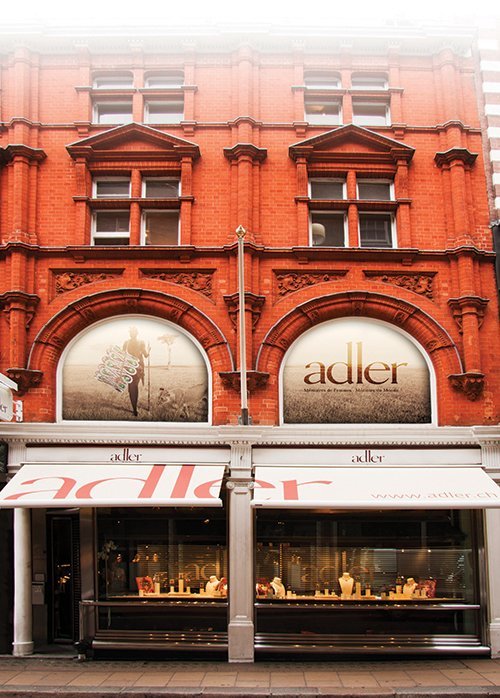 “The Ottoman Empire of the time was full of splendor, brocades and jewelry—the warm sensuality and colours of the Orient. As a young man my grandfather was attracted to that,” Franklin recalls. “At the same time Vienna was the centre of Europe’s arts and music scene. When he returned to Istanbul he brought back the techniques, innovations and style of Western Europe and was the first to try fusion – the fusion of two cultures. It was a fabulous, wonderful blend and he was very successful very quickly.”

Originally from Eastern Europe, Jacques’ father had found inspiration and favour in the Ottoman Empire enroute to a new life in New York. The renowned ‘horse whisperer’ had impressed the Sultan with his understanding of the animals and promptly hired him to work in his stables. All thoughts of New York were subsequently thrown to the wind and more than 100-year Adler association with Turkey began. However, as younger generations of Adlers were schooled abroad, the lure of Europe again beheld the family and in 1972 Franklin and his brother Carlos relocated the house of Alder to Geneva in Switzerland. Stores in premier locations, such as Gstaad, London, Hong Kong, Tokyo and Dubai have since followed.

To this day the philosophy and style of Adler is very much rooted in its east meets west history and in Jacques’ founding passion of innovation.

“We have a tendency to remain open to ideas and cultures, because of our mixed origins…we are inspired by so many things,” Franklin says.

Adler is guided by the passion of creating beautiful pieces that are different. But, as Franklin remarks, continually creating can be a difficult process. New ideas and designs do not stay fresh for long in the age of globalisation and the internet. It is this quest for creativity and uniqueness, married with a commitment to exceptional quality, that sees the house produce only about five percent of what its in-house team designs, which incidentally in the family way is overseen by Franklin’s wife, Leyla.

“We love innovating and we were the first to use titanium. It is a very solid metal but light, which is very useful for big earrings and pins as it is half the weight of gold. It was a very interesting process; we had to invent new tools for the setting of the stones because the traditional tools would break when used with titanium. We have also used wood, agate and now carbon.”

Some of the big houses have copied us – the same principle, the same idea – they say you should be proud that you’re copied but I’m not sure that is a good consolation. However, it is better to be copied than copy yourself.

Now, Franklin says the independent family firm sees great opportunity in the growing dominance of eastern buyers, given Adler’s roots in the orient. The management team, including Franklin’s son, Allen, has a full schedule throughout 2013 and 2014 with exhibitions and events in the Middle East and Asia. Trips to Dubai, Abu Dhabi and Hong Kong will follow on from a recent successful exhibition in Thailand.

Franklin believes that it is the growth in these markets, which will also help to see jewelry evolve and endure.

“I think jewelry has been around for a long time and it has evolved. It used to exemplify power and now it is about beauty. It adds that final touch to the way a woman dresses, it is the signature. Jewelry has become an art form.”