How a husband-and-wife team took their leather accessories label from their living room in Dubai to the world in the blink of an eye.

As the Dubai summer of 2013 started to heat up, Nima Saraf and his wife Emily Noorollahi were looking for a fresh start after six years in the UAE. They had successful careers – Iranian-born Briton Noorollahi was art editor at the fashion magazine Harper’s Bazaar Arabia and her Iranian husband Saraf was working in IT security – and an apartment in Dubai Marina, where they lived with their beloved Jack Russell, Eddie.

The couple – now living in England with their two-year-old daughter Ivy – are the founders of the luxury leather accessories label Eddie Handmade. Despite launching their first collection in Dubai less than four years ago, their brand has already graced major London fashion events, including London Collections Men and London Fashion Week.

“Nima started experimenting with different products, making them for himself,” says Noorollahi. “It was small things like wallets and iPhone cases. At first I thought it was just a hobby, but it just kept developing. He was always on the look out for different leathers, contacting different suppliers and really getting into it. That was in early 2013.” Her husband, whose family has worked in the textiles and garment industry in Iran for generations, adds: “Friends and colleagues started asking me to make the wallets and laptop cases that I had made for myself.”

But it was not until Noorollahi decided to leave work in September 2013 that Saraf’s hobby became a potential business. “I had been contemplating starting my own business for a while,” says the former journalist. “I was going to start a textiles business. I had done all the research and had big plans. It got to the point where I thought, I have to leave my job or I will never do anything. I will just sit here comfortably and dream – so that was it. I decided I was going to leave my job and go from there.” 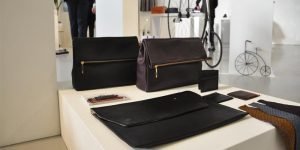 It did not take long for her to get started. On her second day after leaving work, she rummaged around under the bed and dug out her husband’s collection of leather accessories and tools, spread them across the carpet and started planning.

“Nima came home and was a bit shocked,” recalls Noorollahi. “He said, ‘What’s going on?’ I turned around and said, ‘I think we have something quite good. If you are really enjoying this and want to take it seriously, I am definitely up for dedicating all of my time to it’.”

“That was how we started,” adds Saraf. In just one month, the couple had created a new collection of leather wallets, cardholders and iPhone and iPad cases, naming their firm Eddie after their dog. Saraf refers to this process as “the magic”. “I saw this project and I just could not wait,” says Noorollahi. “I had all these products but no brand. It was completely raw. It was like being in a candy store.”

In October 2013, Eddie Handmade launched its first collection at Dubai’s Fashion Forward, an annual event founded by the couple’s friend, Bong Guerrero. The platform resulted in sales and reams of attention for the fledgling brand. “We set up our Facebook page during Fashion Forward because we had so many people coming to us and asking where they could see our stuff. We got 2,500 likes just from that event,” says Saraf.

Dubai had provided the perfect launchpad for the start-up but having looked into the possibility of opening a workshop in the UAE and discovering how expensive it would be, they opted to continue developing the firm in Noorollahi’s home country, relocating to the UK in 2014.

With support from the British Fashion Council, Eddie Handmade has appeared at London Collections Men and London Fashion Week the following year, secured four online retail partners, runs pop-ups in London’s trendy Shoreditch and Covent Garden neighbourhoods and has an office and a warehouse in the UK.

The label now boasts men’s and women’s collection that includes totes, backpacks, briefcases, passport bags, weekend bags and the smaller accessories the firm has produced since its early days, all handcrafted by master artisan Raphael Cerluci and his team at the Dusca Vendramin leather workshop in Florence from leather sourced from Italy’s foremost tanneries. “We still design everything ourselves, and then we travel to Italy and translate those designs for Raphael,” says Noorollahi.

The entrepreneurial pair have firmly established Eddie Handmade in the UK and plan to stay put but still see Dubai and the Middle East playing a part in their future and that of their company. “Our love for Dubai is still there and we want to establish the brand there,” says Noorollahi. “After a flagship store in London, we’d like to open a second one in Dubai.”