The road to success for Claus Porto, a Portuguese family-run business that specialises in manufacturing exotic soaps and now into its fourth generation, has been a slippery one

It’s safe to say Claus Porto has a nose for business. Started in 1887, the Portuguese producer of high-quality soaps and scents has established a strong bond with consumers in its homeland and, more recently, abroad – today, people in over 60 countries use its fragrant goods during their morning bathroom routine.

The company’s sweet-smelling success is down to its ability to seduce consumers’ senses: first, with eye-catching packaging; and second, with subtle aromatic notes found in its bath soaps and perfumes, many of which were formulated decades ago.

Its Musgo Real collection of colognes, shaving creams and soaps, popular with men from Milan to Tokyo in search of a classic masculine scent, is anchored by a fragrance concocted in the ’30s made up of sandalwood and base notes of amber and vanilla. 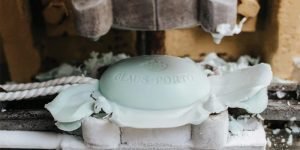 Soap-making techniques have changed little over the years. Staff constantly inspect bars for cracks or imperfections. Old-fashioned machines churn natural ingredients together and move at a slow pace. Soaps are 100 per cent vegetable based, blended with shea butter to create a creamy lather, and milled multiple times to ensure the bar will not break up when in use. Once formed, soap is air dried for several days on wooden racks.

“There’s a lot of manual work involved from the quality control to the packaging. The soap goes from our hands to the customer’s,” explains Francisco Neto, CEO of Claus Porto, during a visit to the company’s facilities outside Porto. As he leads a tour, he motions to a table where staff wrap lavender soaps enriched with pistachio oil in pale yellow paper adorned with a floral print and then hand stamp each with a lacquer seal.

Upstairs in the company’s offices, Neto is joined by Aquiles Brito, whose family has run the business for four generations. Named after his great-grandfather, Brito is eager to take the company in a new direction and has brought Neto aboard to oversee a new phase. “We’ve been through a lot as a company: the Great Depression, World Wars and time and again our clients have looked to us. We are a guarantee,” says Brito, flipping through well-worn books showing hundreds of labels that make up its archive. “It’s an intimate relationship since our product is used daily by people in their most private space: the bathroom.” 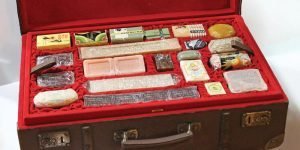 Although stocked at upscale retailers from The Conran Shop in London to Le Bon Marché in Paris, the company has decided to venture into retail. In Lisbon’s Chiado neighbourhood, the firm has recently inaugurated a 120-square-metre shop in a former pharmacy where male clients can sit for a wet shave on Japanese-made barber chairs. Next up is a flagship store in its hometown of Porto. There’s also talk of following that up with yet another station in London.

Fans flock to its understated scents – such as its best-selling Banho soap with hints of lemon and verbena – as well as elaborate labels, especially original prints made between the late Nineteenth century and Thirties with Art Deco motifs and creations that are a nod to the country’s tile work and architecture. Following in those footsteps, Neto and Brito decided it was time to unveil a new logo: the “Claus” name is now in a heavy Deco font while the sharp strokes of the “Porto” letters pay homage to the profile of the city’s landmark Dom Luís I Bridge.

In addition, they have begun to work with noted British perfumer Lyn Harris. First up are candles with scents based on its existing collection. Adds Neto: “There’s a rich heritage which we want to respect. It’s part of our identity. It’s what makes us unique.”