The shoemaker to Silicon Valley’s bosses

Set amid the gentle rolling hills of Italy’s Marche region sits the medieval town of Montegranaro. This quiet settlement of 13,000 souls has long been considered the epicentre of fine shoemaking for men. A five-minute drive from its historic centre sits the factory of luxury group Tod’s, famous for its iconic driving shoe with rubber pebble outsole. Since the 1950s the area has been a buzz of activity as shoe companies and suppliers emerged to serve major fashion houses.

Today, startups have emerged, tapping into the accumulated know-how of quality shoemaking among the town’s craftsmen. One standout name is Bontoni. Launched in 2004 by Franco Gazzani, a Montegranaro native who returned to his cobbler roots after a stint in management consulting in Milan, the brand’s workshop sits inside what was once the family’s garage.

Together with his father, Manfredo, and their uncle Bruno – the two combined have nearly a century’s worth of experience in the trade – they produce a limited number of bespoke and ready-to-wear lace-ups and loafers each year. The label boasts a select clientele that includes A-list Hollywood actors, NBA legend Magic Johnson as well as tech CEO’s including Instagram co-founder Kevin Systrom and Jeff Bezos of Amazon.

What attracts customers is the precise fit of Bontoni’s footwear and the tasteful designs sketched by the hand of Manfredo. “Comfort is important. Our goal is for the shoe to slip on like a glove,” says Franco. There are hundreds of models to tempt clients, including double monk strap formal shoes and rugged derby models that can be paired with a chunky Vibram sole.

For a made-to-measure model, Bruno, who keeps up the time-honoured skill of making the shoe last, will spend days sanding a wood mould to millimetre precision to reflect the measurements taken by Franco when he first meets a client. Care is taken to notice every nuance on the foot, from a wearer’s unusual toe joints to bone spurs. 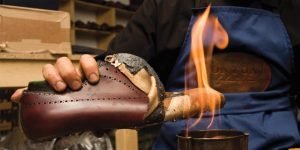 “Shoe last making is a work of art,” explains Franco, who drives home his point by giving a tour of Bruno’s atelier where his uncle spends his downtime making violins by hand.

From start to finish, a pair of Bontoni shoes takes approximately three months to complete. Insoles, outsoles and the upper are cut and sewn together by hand. Once the leather is fitted around the last, it is left to rest on it for several weeks. Then the upper is put over an open flame and hammered repeatedly to shape its final form.

Another important stage is colouring. Franco uses supple natural leather and concocts all the dyes such as vinaccio, a dark cherry hue, from scratch. Shoes get several coats and then are polished repeatedly – the process takes two weeks to ensure models have a rich patina. As upper and sole are united, Bontoni inserts Poron, a foam engineered at NASA, to serve as a cushion. “It’s a 21st-century twist to an age-old craft,” adds a smiling Franco while showing a cutaway model that reveals their secret padding.

Attention to detail knows no bounds. The brand assembles its own shoemaking twine, painstakingly combining slender strands and sealing them together with wax to ensure stitching is up to the task for models that sport a Norwegian construction. Adds Franco, “this pursuit of perfection, and commitment to honouring the tradition here in Montegranaro, is what sets us apart.”

Bontoni is available at Level Shoes, The Dubai Mall