It was during the first few heady months of his student days at the University of British Columbia in Vancouver that British professor and mind-mapping expert Tony Buzan came up with his revolutionary educational aid technique.

Now 72 years old, the author, television presenter and educational consultant is certain had a book existed in the 1960s on the subject, he probably would have read it and moved on. Ironically, it was the fact there was nothing on the subject of how to harness what he describes as “the erratic power of his brain” that spurred him on to study neurology and its relationship to improving the memory – the very subject which has since earned him notoriety.

“Like 99 per cent of students in college, I got lost. I got lost within the territory of my brain,” says Buzan from his home in Berkshire in the UK. “It was almost like being a traveller without a map. Where does that get you? Stranded on a reef in the ocean and stuck on mountains on land.

“I went to the library and asked to borrow a book on how to use my brain. They pointed me to the medical section. I said I do not want to operate on it, I want to use it.”   Buzan wanted to improve his memory to become a better student. With little or no academic studies on memory, he did what any precocious young innovator would do – he learnt what he could about the brain’s functions and came up with his own method for better recollection, the mind map. A mind map is a diagram used to visually organise information containing the main concept drawn at the centre and with written ideas, or branches, emanating from the central source. 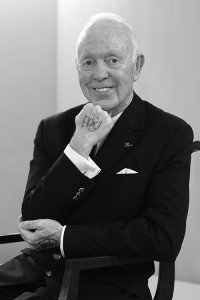 “The principles have remained unchanged since then, but elements keep evolving,” he says. “The fundamentals to the mind map involve the initial images, colours, the association you have with those colours, where things are on the page and looking at [things] in a non-linear way.”

More than 100 books in 30 languages, countless appearances on television, including his own BBC series Use your Head in 1974 and two Nobel Peace Prize nominations later, Buzan’s work is as relevant as ever. This year marks the beginning of the Butterfly Universe Project in Karachi. Over the last four months, Buzan has been travelling to the Pakistani city to deliver a project that aims to unlock children’s potential.

“Art and drawing are a crucial part to my technique, although I could never draw. That frustrated me,” Buzan says. “I found Leonardo da Vinci’s technique the most useful and incorporated it into my work. I found when I could draw, it opened up my mind. Using his method, I taught 40 teachers in Karachi how to draw butterflies. Or rather, I unlocked their potential to do so. The results encouraged them to believe anything was possible.” From Pakistan, Buzan will go to schools in Poland, China, Mexico, India, East Africa and the UAE this year. When children realise they can draw something beautiful, it opens up the universe for the mind. That then spreads immediately to everything else they think they cannot do.”

Slightly unorthodox methods are sure to draw criticism, although Buzan states he has far more fans than detractors. One notorious follower was the late Michael Jackson, who employed Buzan’s services to help with his children’s education.

“That was about two years before he died,” recalls Buzan, who has not been in contact with the children since Jackson died in 2009. “He was living in Bahrain at that point.   “I met him and the children [in Bahrain] over the course of 10 days.

“During the time I was there, he was a caring father. His palace was decorated with art and figures of genius. Michael was cultivating the intelligence of his children. He wanted their minds to roam.”

Alongside the Butterfly Universe Project, his latest Nobel Peace Prize nomination weighs on Buzan’s mind. Not because it is his second nomination (the first was in 1999), nor because he will have to wait until the end of the year to discover whether he has won but why he was put forward in the first place.

“When I was nominated it came as a shock. Why are my maps getting me nominated for the peace prize?” he says.

“They said my maps help the brain to realise how wonderful it is. And when you realise you have one of those in your skull, you tend to look after it.