Rising out of the ashes, Libya is using its greatest asset, a forward-thinking mentality, to revamp its economy and rebuild the nation.

Libya is re-opening its doors to the world. The country’s economy is forecast to expand by 16.7% this year after surging 121.9% in 2012, and the Libyan Investment Authority, said to have assets of around $60 billion, successfully sought the release of frozen stakes in Unicredit, Finmeccania SpA and Eni SpA.

Refusing to become another Iraq, the country is actively reinvigorating partnership talks in every sector, from oil and telecom to tourism. The UAE, which has $2 billion of investments in Libya, was one of the first to send a business delegation within months of Gaddafi’s death. But to Libya, the UAE represents more than just a business partner.

“We do not need financial support, as we have resources from the 1.6 million barrels per day (bpd) that we produce. What we’re looking for from the UAE is their experience and lessons learnt,” Prime Minister Ali Zeidan told Global Citizen during a visit to the UAE.

As of June 2012, Libya’s hydrocarbon output soared to more than 1.52 million bpd from a low of 166,000 bpd in 2011, and is expected to increase to pre-conflict levels this year. Talks on oil exploration have already begun with the Sudanese Government, Total SA, and Russia’s Tafneft.

Newcomers to Libya, such as the UAE’s biggest builder, Arabtec, are also looking at oil and gas projects. “Libya is a medium-term market for us on the residential side, but immediate for oil and gas. Our subsidiary Target Engineering is already looking at some projects in the sector,” Ziad Makhzoumi, Arabtec’s chief financial officer, told Reuters.

Similarly, General Electric expects to make considerable profit in this market, as much as $10 billion according to CEO Nabil Habayeb, as the firm investigates multiple sectors. Libya’s dependency on hydrocarbon earnings, however, makes its vulnerable to oil shocks, as hydrocarbons account for 60% of the country’s GDP and 95% of its revenue.

“In relation to the oil industry, we would like to expand as much as possible. We haven’t yet started discovering other mines in Libya, and this field is very promising as we’re diversifying our economy. I think commerce and trade will be a major opportunity, and in the development of our airports, seaports, highways, means of communications, desalination, and renewable energy, there are many opportunities,” Libya’s Foreign Minister Mohammed Abdel Aziz told GC.

One of the biggest projects approved for resumption is the Sirte-Benghazi railway project, a $12 billion scheme that was split between Russian Railways and China Railways Construction. Despite wanting to revive it, Libya warned the Russians and Chinese not to raise their original contract prices by claiming compensation for the two-year delay, during which costs of construction materials significantly increased.

Libya’s ICT and telecommunications are also attracting investors. According to UKTI technology adviser Nitin Dahad the country particularly needs “technology know-how and skills-training for everything from network architecture and e-government to regulatory law.” Libya recently halted a tender to manage LIPTIC, the country’s monopoly telecom operator, which UAE’s Etisalat is keen on winning.

A 2012 report by Sydney-based consultants BuddeComm says, “Libya’s telecommunications infrastructure is superior to those in most other African countries and services are available at some of the lowest prices on the continent.”

Leading financial institutions, such as Arab Bank, are also eyeing Libya. Others, like Dubai-based Arqaam, took the plunge and acquired Libya’s Al Rashid Finance, enabling it to buy and sell securities there, while Qatar’s Masraf Al Rayan acquired an additional share in an unidentified Libyan bank, poised for conversion into an Islamic one. 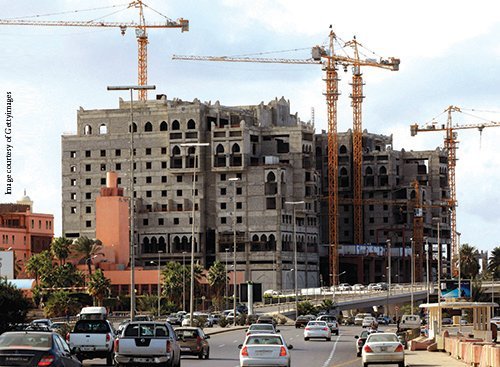 Ambitions that Libya could become a tourist hotspot are not far from reality, given its unspoilt coastline on the Mediterranean Sea, its Roman Empire heritage, and proximity to Europe. British Airways, Lufthansa, and Afriqiyah now fly direct from London to Tripoli, while Qatar Airways, Emirates, Austrian Airlines and Alitalia are among others operating regular services.

Libya’s airport sector recently attracted 10 leading UK companies in the aviation field. “All are eager to be part of the exciting Libyan airports sector and to develop relationships and partnerships with suitable Libyan companies,” said Peter Budd, chairman of UKTI Airports Advisory Council.

“It’s a competitive process at the moment. We use tenders, and any country or company that provides quality and the best price…SMEs are especially attractive for freedom fighters; many of them are interested in small-scale projects,” said Aziz.

Although it might take a while before Libya is back on travellers’ agendas, for now it appears to be headed in the right direction.