The printing shop in Dubai that’s raising the bar

Ever since our lives started moving steadily online, there has been an ever-growing cultural swing back towards the physical world. Vinyl sales have rocketed globally and Polaroid film is back in production. The printed word and image has taken on a new value and vogue. Analogue is, suddenly, everywhere.

It’s this human impulse for the tangible which Paul Green was banking on when he launched Toil & Tinker, the print shop-come-creatives’ hang out which specialises in everything from art prints and corporate campaigns to T-shirts and wedding invitations.

Originally founded in 2014 as a small boutique business – little more than a corner stall in Dubai Garden Centre – earlier this year the brand moved to a new, markedly more visible spot in Al Quoz’s Courtyard, a small, shady, thoroughfare in the midst of an industrial estate. The move upped the business floorspace nine-fold in the process.

Green has put the room to good use; the 4,700sqm open warehouse is a veritable hipsters’ paradise, littered with edgy and ironic decorations.

“We print stuff – just about anything!” begins the business’ “creative manifesto”, hanging proudly behind the welcome desk. Intimidating futuristic equipment is punctuated by vintage furniture and ragged rugs. Art prints hang on the walls and action figures line the shelves; Transformer Optimus Prime rubbing shoulders with the Teenage Mutant Ninja Turtles. A pair of dogs scurry around the floor – the mood is anything but that of a business environment. 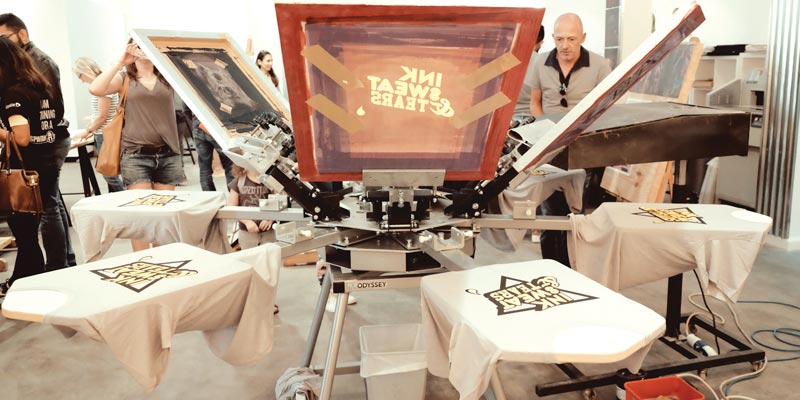 “I was surprised at first, but now I understand why Toil & Tinker has been so successful,” begins Green, a 36-year-old British expat. “Because if you go to any other print shop, it’s a very commercial environment – very clean, very uninspiring – I think we’ve just hit that niche for people who have that creative fire inside them.”

Walking through the space, Green spiels enthusiastically about the specialist equipment on offer, worth $275,000. These include a 1.6metre-long, eight colour Roland, nicknamed “The Beast” which prints on 50 metre rolls – ideal for banners, large- scale decals and fine art prints alike. His pride and joy appears to be the Japanese Risograph machine – reportedly the only one geared for colour in the UAE – cherished by designers for its soft retro hues.

But as important to Toil & Tinker’s success as the hard-to-find tech is, it’s the communal, come-as-you-are atmosphere that impresses a first-time customer most. Visiting early on a weekday morning, a group of bearded guys hang around a long desk, studying a freshly painted T-shirt intently. A communal area offers desk space and free coffee to any thirsty creative passing through in need of free Wifi. A retail corner sells arty books, imported magazines and bespoke printed limited editions. During special events the space hosts exhibition launches, live DJs and street food stalls.

The idea for Toil & Tinker was born because Green, a former fine art and photography graduate, was looking for somewhere to print his own work in the UAE, and came up with a blank.

“I just wanted to make wrapping paper and greeting cards,” he remembers. Starting out with a staff of three, it was a hard landing. “We were buying equipment, turning it on and going, ‘okay, now what?,’ ” he remembers. The business’ current payroll of 16 has rather more expertise, he adds.

Dressed in loud blue trousers, a home-printed yellow Dubai T-shirt, sporting a Toil & Tinker trucker cap, windscreen glasses and sculpted goatee, Green does not resemble your typical entrepreneur. So it is surprising to learn this creative endeavour comes after 14 years spent in the rather less exotic world of telecoms.

Starting off at the bottom wrung of a retail store for UK phone network Vodafone, over seven years Green worked his way to regional manager. Voted one of the company’s top 100 employees, in 2006 Green won an all-expenses holiday to Dubai. It turned out to bite his employers in the back – through a mutual friend he met a recruiter for Du, and was offered a job on the spot. Green stayed with Du until 2012, before moving initially into consultancy.

Before then, Green had already tried his entrepreneurial luck, founding the Book N Bean coffee chain in 2009, of which just two of five branches remain.

“We made some very big mistakes,” says Green. “My biggest lesson was MVP – minimum viable product.” There is another acronym that leaps to mind when explaining Toil & Tinker’s success – USP. In a world increasingly lived on screen, the tangible and touch carry increasing cultural cache.

“Someone asked me the other day, ‘Everyone is going digital, why are you going analogue?’,” remembers Green.

“You just can’t beat the way text looks, smells, feels – you can’t replicate that on a screen. A print will always be something unique, for all ages.”