The Right to be Forgotten

Known as the digital hitman, Frank Ahearn is hired by the wealthy and famous to make things disappear whether online or through an illusion he creates.

Frank Ahearn is as close as you can get to disappearing without using illegal documents or fake passports. Originally an undercover investigator for large corporations, the digital hitman, as he is known, learned about skip tracing – or finding people – from another investigator.

“The idea of picking up the phone and extracting information such as bank, phone and airline records to hunt someone down was fascinating to me,” he says.

As privacy laws changed and made it more difficult to locate such data, Ahearn switched sides and began to help those who needed to disappear. The turning point came by total coincidence when he met a would-be client in a bookstore.

The man, who was looking for books about discretion, offshore banking and living in Costa Rica, proceeded to pay for them with his credit card, a huge red flag that could lead to his whereabouts. Ahearn casually approached him and explained this, winning his very first client and signalling the start of a lucrative new business.

“It turns out he was a corporate whistleblower and concerned about repercussions,” he tells me from his office in Manhattan during our chat.

Ahearn’s clients come from all walks of life but they are not necessarily criminals or those with a murky past. One of his Middle East clients, for example, was a partner in a business that had fallen on hard times and during that period, his father died, leaving him a significant amount of money.

While his partner assumed he was going to use the money to bail their company out of debt, the client knew it would be a losing situation to put more money into the business. So he felt it was best to close the firm.

Outraged at the decision, the client’s partner became extremely aggressive. “Things started to happen, like his car getting scratched, broken windows at his home and soon it escalated into serious threats. The client felt it was best he disappeared because he believed his ex-business partner would cause him harm.”

While all this trouble was taking place, the client was trying to build an online business and needed to stay in his home city until the project was complete. Ahearn had him sell his apartment and move into a holiday rental that had all phone, television and utility services in the apartment owner’s name and not the client’s.

Next was moving his internet business offshore to the Bahamas using a bank account that accepted sales in another country. After setting up the company’s contacts through a third party service such as Odesk, the final move was for the client to purchase a new home using a corporation and not his name.

“What is important when someone disappears is to create disinformation. You cannot just disappear, you need to trick the predator,” says Ahearn. This means keeping them busy with false leads. Such tactics, depending on the situation, might include withdrawing money from foreign cash machines while travelling.”

A ruling by the European Court of Justice in May this year over the right to be forgotten, which could be used against search engines such as Google to remove links to documents that contain personal information if requested by that individual, will no doubt make Ahern’s job a lot easier. In the first four days of introducing the online form, Google had received more than 41,000 requests from Europeans who wanted the company to remove their personal information from search results. To date, it has received more than 30 million requests for deletion.

But as the recent ruling came from Europe, it does not apply to the US site, so a determined searcher can still track down details on google.com. While the move was met with strong opposition in Silicon Valley, privacy campaigners are citing the introduction of the ruling in Europe as precedence for it to be extended worldwide.

What is important when someone disappears is to create disinformation. You cannot just disappear, you need to trick the predator

Ahearn says one of the biggest challenges his clients come to him with today is to reclaim their privacy or combat some kind of digital dilemma like untrue, negative, embarrassing or dangerous information that has surfaced online. “These types of situations need to be strategised and executed meticulously,” he says.

“One such client worked at a private equity firm and one morning he was called into the CEO’s office. The CEO showed him a news article about a Ponzi scheme and the criminal who ran the scheme used my client’s name. The criminal was never caught and when my client’s name was typed into a search engine, information about the Ponzi scheme and the company he worked for dominated the internet. This was a serious dilemma for him and his company.

“This was a waste because when the suppression stops, the information rises back up. Plus, if someone searched past page three on a search engine they would discover the Ponzi scheme information. The company called me in to assist with the problem. My suggestion was to create an identity for the criminal and give him an online presence that differentiated him from the client. The company thought it was a pretty strange solution but agreed to trust me.”

Ahearn gave the criminal a background from Zurich, schooled in London and divorced from a woman in Brussels.

“Now if someone searches my client’s name, they would see my client the upstanding citizen and the other person who is a criminal from Zurich. Being able to differentiate from the client and the criminal was the solution.”

Our only tool of privacy, according to Ahearn, is to remove ourselves from direct connection and avoid the physical surveillance that tracks our moves in public. “Disappearing and privacy is more of an art than science.”

How to Disappear recently climbed to number four on the New York Times bestsellers’ list for non-fiction e-books. 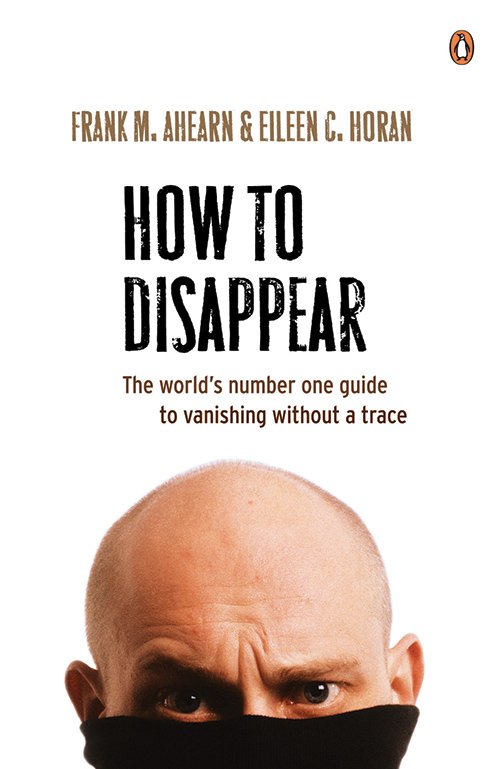