Sudan may have lost a portion of its territory and oil reserves, but out of this emerged a stronger economy, with doors wide open for foreign investment.

Jolted by the loss of most of its oil reserves with South Sudan’s secession in 2011, Sudan is turning its focus onto its own resources—an estimated 940 tonnes of gold reserves, 2,000 billion tonnes of iron, 150 million tonnes of copper, and millions of hectares of arable land.

For GCC countries most of which are highly dependent upon imports to meet their food requirements, Sudan’s fertile earth and plentiful water from the Nile make it a highly profitable destination for agricultural investments.

“Sudan has enough agricultural land and fresh water resources to feed the Arab world. It also has one of the largest live stocks in the region,” says Haytham El Nazir, chief operation officer at Khartoum’s Haggar Holding Company, which owns a diverse group of businesses, including Pasgianos Food & Beverage, Coldair Engineering, and Sudasat, the largest providers of VSAT services throughout Sudan.

Livestock exports earned Sudan around $408 million by the end of November 2012. This was an increase from roughly $333 million earned in 2011, according to El Nazir.

Sudan’s crops have indeed attracted a line-up of interested investors. This year alone, Lebanon’s GLB Invest announced it was investing $800 million in Sudan’s agricultural projects to produce animal feed that would be sold in Saudi Arabia, while the kingdom’s National Agricultural Development Company is discussing an agricultural investment with Sudan’s Al-Zawaya Company.

“We understand that particularly in Saudi Arabia, there will be less dependence on agriculture, because they’re trying to conserve water for drinking rather than use it in irrigation. In Sudan, there’s plenty of water coming from the Blue Nile and White Nile, so there are investment projects to compensate for what will not be produced in Saudi Arabia for instance,” explains Nicholas Borg, general manager of the Corinthia Hotel Khartoum, a sister property of the flagship London hotel. 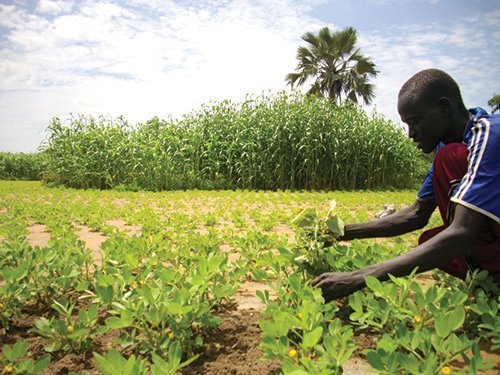 Meanwhile, Hadi Property Investment firm has been mulling with a Turkish partner a 100,000-acre project to produce wheat, soya, sorghum and animal feed in Sudan’s northern state. But the Saudi firm said that unless the government allowed it to repatriate at least some profits abroad, it would halt its project, which is still at a feasibility study stage.

“The problem with the central bank is whenever you want to transfer money they tell you there are no dollars,” head of the company, Mohammed Hadi al-Barqawi, said on the sidelines of an Arab food security conference in Khartoum.

Although Sudan has passed a good investment legal frame which allows investors to recoup 60 percent of profits, the law still needs to be implemented.

“The main challenges facing Sudan at present is to pass the transition period after the split of Southern Sudan. The economy is expected to recover gradually in two to three years on the back of a sound revival of agriculture, an increase in oil production, a strong performance of gold exports and robust absorptive capacity,” El Nazir said.

Despite the losses incurred by Sudan after the separation of the southern region, more than 2,900 km of pipelines, refineries, processing units and exporting terminals remain under Sudan’s ownership.

And with the recent discovery of 260 tonnes of gold near Abu Hamad Township in River Nile state earlier this year, it is easy to see why foreign investors are flocking to the country.

Nearly 100 companies have obtained licenses from the Sudanese government to begin prospecting, and the government expects 20 firms to be actively producing gold by the end of this year.

The results are already evident; the Ministry of Trade confirmed that the country’s mineral exports increased by 47% over the last year, while gold exports rose by a staggering 93%.

According to Borg, another market to keep an eye on is hotel apartments. The Corinthia Hotel Khartoum is the city’s most luxurious and sits at the meeting point of the Blue and White Niles. Borg has observed a growing corporate clientele seeking ultra-luxury accommodation in the Sudanese capital, and over half of them have been GCC residents.

“Around 55% of our total guests originate from the GCC region.” He points out that there not just visitors, “some of them have been residing at the hotel for more than two and a half years.”

“They are all from very reputable, worldwide organisations. In Sudan you will find everything – corporate companies, government institutions, NGOs, which is a very big thing in Sudan. And there is political stability and facilitation of investment.”

Borg adds: “When it comes to availability of competent labour, Sudan certainly ticks the box.”