Depending on who you talk to, Patrick Liotard-Vogt is either the most loathed man on the planet or the most popular.

When the Nestlé heir disbanded all 850,000 members of his exclusive invitation-only social club A Small World (ASW) in one fell swoop, thousands joined Facebook hate groups with him as their target and his face was superimposed on images of toppled Libyan dictator Muammar Gaddafi.

“We cleaned out a little bit,” says the 29-year-old chairman by way of understatement.

In reality, he admits, that meant “kicking everyone out and starting at zero again.” It was a brave move, particularly when his members included some of the world’s wealthiest and most powerful people, many of whom were disgruntled to find themselves out in the cold.

But three years after buying ASW’s majority stake from media mogul Harvey Weinstein, its membership had soared from 450,000 to 850,000; in short, it was no longer the selective travel and lifestyle network it purported to be.

So in May this year, he closed the website and reopened ASW five days later with a select group of 40,000 invited members.

They will each have three invitations and within two years, the company, whose members share tips on the most exclusive restaurants, hotels and nightclubs around the world and are offered perks from high-end establishments, will grow to a maximum 250,000.

If Liotard-Vogt seems to play hard and fast with the rules of business, shrugging off opprobrium from his critics, it has become something of a way of life for the Swiss-born millionaire.

At 16, he was a rebel and a dropout from several boarding schools.

His despairing parents gave him $54,000 and an idea born from his difficulty at getting into the Parisian nightspot Les Bains Douches sprouted.

He used the money when he was 17 to set up The World’s Finest Clubs, a membership card costing $2,700, which ensured easy access for its 2,000 holders into any one of 120 prestigious nightclubs around the world.

Like many of the 40-odd companies on his portfolio, it was a venture which appealed as much to his lifestyle as to his business acumen.

In fact, it is hard to separate Liotard-Vogt the international playboy and jetset millionaire from the business executive and serial investor.

He is a familiar face on the party circuit and is as likely to be spotted with the likes of singer Beyoncé Knowles and actress Carey Mulligan or hosting soirees on his rooftop terrace during New York Fashion Week as he is in the boardroom.

That is strangely at odds with the image he is keen to cultivate now.

“I prefer to see myself not in tabloid pictures with beautiful girls but more [to be seen] in the financial sense,” he says at the Global Citizen Forum in Dubai.

Yet despite his fourth decade looming next year, he admits enjoying the single life and not being ready to settle down: “Life has certain phases…I cannot tell when the next stage is but it is certainly not 30. I will always be a kid in some ways.”

Born in Zurich, where he still lives with his parents, he has often had to counter the notion that he was born with a silver spoon.

His connections have certainly opened doors; his great-grandfather was the chief executive of Nestlé but he did not go into the family business.

“I am an entrepreneur at heart. It is not like I have inherited a lot of money and done nothing. People who have not met me assume ‘he is arrogant, he is young’ but after a certain amount of time, they feel they underestimated me.”

His skill, he says, is “creating synergy” between different companies which complement one another: “I know who to contact and how to put people together.”

That portfolio has included a Swiss social students’ online network, bought when he was 21 and sold 18 months later for nine times the amount he invested, a nightlife portal firm and a Swiss private bank, whose board he sits on.

He even at one point invested in a Swiss hand sanitiser called Silkmed after being approached by a doctor. “It was an exclusive hand sanitiser,” he insists.

At any one time, he owns between 35 and 40 companies with many of his business transactions done with friends or contacts. In most cases, as with A Small World, the firm is already up and running and is given a boost with his cash injection.

But he says: “I do not invest to sell. I love making deals. I would not like to invest in something I could not identify with. I am looking to have an input and shape a business.”

He has learned from his mistakes along the way: only invest in 30 per cent of a project because there will always be second and third rounds of bidding and do not scrimp on human capital: “If you feed peanuts, you get monkeys. Good people have their price.”

For now, he will be focusing on his shareholding in Kittitian Hills, a new luxury development in St Kitts in the West Indies where he also holds a passport, and on A Small World, which now has 1,200 members in Dubai and a total of 3,000 across the Middle East.

When those numbers expand, they will be, he hopes, the kind of people he likes to both party and do business with.

“There is nothing more boring than a party of rich people,” he declares.

“You need a bit of everything. You need the billionaires, the models, the creative people and the normal people.”

“The community is its own democracy. They decide who comes in and who goes out. It is a synergy of mindsets.” 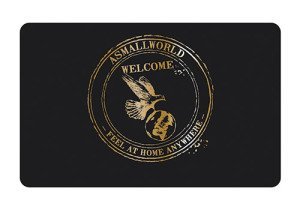