For a man who had never set foot on Arabian soil before creating his first oud fragrance, Stéphane Humbert Lucas has not only captured the scent of the Middle East but is also bottling it

As a Parisian, one would think Stéphane Humbert Lucas would be little qualified to capture the scent of the Middle East, let alone bottle and sell it.

Yet the most recent line founded by the creator and nose behind the brands Nez a Nez and SoOud pays homage to “the smells of the Middle East” and sits at the top end of the niche perfume market, ranging in price from Dh777 ($211) to Dh2,850 ($825) for his O Hira fragrance. The entire collection is targeted at the Middle Eastern consumer.

The number seven is a personal favourite of Lucas, as well as having spiritual and symbolic importance throughout history, both in the Quran and the Bible.

In his hotel suite in Dubai, with the help of Eric Torchet, his friend, Middle East sales distributor and sometimes translator, Lucas says he designed the brand and logo himself with the 777 symbolising “spirituality, protection and luck”.

The collection has 11 bold fragrances, all with the “oriental consumer in mind”. Each fragrance consists of three heady base note ingredients which he handpicks and sources from his network of agriculturists, from vanilla farmers in Madagascar to rose farmers in India, forming a triad of aromas in every bottle.

The 43-year old artist and painter also designs the luxurious oriental-themed bottles and packaging that the brand can be identified by.

Lucas attended the prestigious Beaux-Arts Academy in Paris but failed to thrive because of his rebellious nature and a disdain for the classroom learning environment.

Instead, a chance encounter in 1998 with the perfumer Henri Sorsana, 75, whom he calls his master and still works with today in his laboratory and family home in Paris, taught him everything he knows about the industry.

“To make perfume is not so magic,” he says. “You only need a balance and a tube to put drops. When you put one or two grammes, you make a note. Of course, it is more complicated to adapt your formula.

“It is a noble art. The measure of art is literature, painting and music but to create good perfume so it has quality, innovation and is done with passion, you have to know the measure of art – then you can dream.”

Lucas never set foot in the Middle East until 2012. Sceptics wondered about his ability to craft a scent that would capture the true essence of Arabia with only three base note ingredients.

His first venture into the oud perfumery business was with his SoOud collection in 2006 and it was risky to say the least, considering bigger titans had tried and failed before him. Yves Saint Laurent’s M7 oud, for example, was deemed ahead of its time when it launched in 2002 and had to be reformulated years later for a relaunch in 2008, although it is now a top seller for the brand.

On the back of the successful launches of his Nez a Nez and Hypnosis brands, the Frenchman’s intrigue with the region only grew stronger. For him, the precious dark agarwood scent known as oud was the only way forward. “I was younger and oud was totally new and pure but I prefer other ingredients now,” he says.

Lucas makes the comparison between himself and the self-taught French painter Henri Rousseau. “He used to paint lions, tigers and wild animals without seeing them and only imagining them.

“For me, the Middle East is a fantasy. I kept this naive vision but of course I read a lot to learn about the people and the places.”

His research involved reading the Quran as well as familiarising himself with Lawrence of Arabia, books about Sheikh Zayed, the founder of the UAE and the tales from One Thousand and One Nights.

Aware of the sensitivities surrounding the misinterpretation of Islam and the Quran, Lucas enlisted the help of the imam of the Grand Mosque of Paris, as well as the director of the Arab World Institute in Paris, to make sure the naming of fragrances such as Soleil de Jeddah and Kohl de Bahrein and their packaging “was not frustrating for some Muslims”.

Despite his fascination with the Middle East, Lucas does not shy away from the fact the oud business has become commercialised. Everyone from Tom Ford and Christian Dior to smaller niche brands such as fellow French perfumer Killian has tapped into the oud market, traditionally favoured by the oil rich states of the Middle East.

“Oriental customers have a lot of money,” he says with a smile. “Of course, this is not the only answer.”

Torchet adds: “He wanted to create something from a French person to a Middle Eastern person — a gift from the Occident to the Middle East.”

Lucas explains the task was not without its challenges. “If you produce a luxurious looking bottle then they will buy it but if the quality and the scent is not there, they will not buy it again.

“They are specialists and they know what they want so it is a challenge for me to speak directly to the Arabic customer.”

It is a challenge he has more than met, says Torchet, who claims the 777 collection in Harrods, London, was the  “most successful launch ever of a niche perfume brand for the store, where it is the third best selling brand out of 230”. 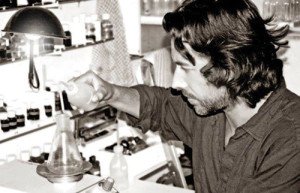 According to research by the NPD Group in the US, a market research company specialising in prestige cosmetic products, niche brands are outperforming the pace of growth of the rest of the market.

“The fragrance brands that are being sold in more selective distribution are experiencing explosive growth,” says Karen Grant, vice president and senior global industry analyst for the firm.

“They are growing faster than any other type of fragrance in the prestige space and their combined sales are actually more than double the size of prestige celebrity fragrances.”

Torchet says: “ Stephane is an artist and works on his own or with a very small team so we like to take things slowly.  Black Gemstone was created 10 years ago but we only launched it now…he’s an artist so it depends on his mood. It is difficult for us to understand but that is how he works.”

For the sales distributor, the brand has reached saturation point in the UAE market. Lucas says he has no plans to increase distribution outlets in the near future with the exception of Oman, where the brand has just launched.

“I believe our retail will last like this in the UAE for a few years. We have no expansion plans. The idea is to be selective. We are a small gold stone.”

He adds: “We cannot compete with the sales figures in Harrods in London, no matter how well we perform here in the UAE or GCC.”

In the UAE, 777 is available at Bloomingdales, Harvey Nichols, Saks Fifth Avenues, Villa 515 in Jumeirah, Emirates Palace hotel and House of Fraser, as well as stores across the GCC and international outlets such as Printemps in Paris and Tsum in Moscow.