In a business bound by certification, high-level investment and heritage, those who break the rules are not looked upon kindly. But that is exactly what fine jewellery’s very own agent provocateur, Fawaz Gruosi, does best and his hunger to challenge the establishment and take risks has won him fame, fortune and an enviable little black book.

Gruosi is the founder, creative director and elan vital of jewellery and watch house De Grisogono. His life is a whirlwind of red carpets, front rows and yachts, partying with the A-list’s elite; his Cannes parties are the stuff of legend. And he never misses an opportunity to be snapped with that moment’s bright young thing, who will, of course, be draped in De Grisogono.

But behind all this razzle dazzle is a genuine business trailblazer, whose ability to think in ways that others do not has changed the international jewellery industry forever. And it all started with dank hunks of carbon deemed too brittle to be cut into gems, or black diamonds as they would be known when Gruosi was finished with them.

“I had black diamonds on my desk for a while. They were mysterious but I didn’t know what to do with them,” recalls Gruosi, who set up his brand on the Rue du Rhone in Geneva in the mid-1990s. “One day I rolled a white pearl on my desk towards them and suddenly the contrast made the black diamonds come alive. It was the beginning of my first creation – a black diamond ring with a centre pearl.” 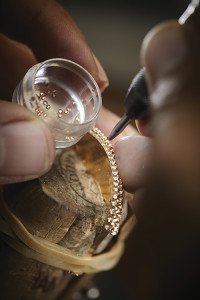 Once the idea had cemented in his mind, Gruosi travelled the world, buying up as many black diamonds as he could afford. With a start-up fund of less than $17,000, it was a risk to hitch his wagon to these stones as the difficulties in cutting the delicate carbonados meant the process cost twice as much as the gems themselves.

Gruosi bet everything he had on black diamonds and won. The debut collections were a high-profile success, attracting an enviable clientele and securing De Grisogono’s future. By 2006 – two years shy of the brand’s 15th anniversary – the company was already racking up annual sales of $114 million.

The jewellery industry itself was less welcoming, however, and Gruosi remembers a time when he dreaded stepping outside in Geneva for fear of an outraged community who accused him of selling the jewellery equivalent of the emperor’s new clothes.  But for Gruosi, who has never undertaken any formal gemological training despite working in the industry since the age of 18, the beauty of a gemstone isn’t found in a Rapaport price list, the standard baseline for determining the cost of wholesale polished diamonds.

“I make intuitive choices and impulse buys,” he explains. “I see how to elevate unfit-for-jewellery gems to extraordinary ones. For me, every stone can be deemed exceptional when you have the capacity to see its inner beauty and strength. By highlighting and enhancing the intrinsic qualities of every stone, I reach to turn so-called faults into qualities. I know how to see extraordinary in ordinary things.”

A quest for the extraordinary is what led Gruosi into the jewellery business in the first place. He was born in Beirut in the early 1950s but spent the majority of his formative years in Florence with his Italian mother, where he moved following the death of his Lebanese father. He loves Florence and says the city’s “culture, good taste and aesthetics” inspired him to vow to dedicate his life to beauty. 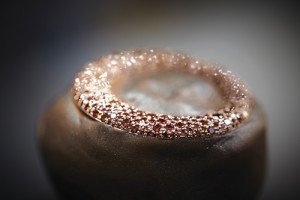 After taking a job in a Florence jewellery store in his teens, where he quickly elevated himself from glorified cleaner to store director, he moved at 30 to Saudi Arabia to head up Harry Winston in the kingdom at the request of the high profile Alireza family. After three years he returned to Europe to Bulgari, where he worked under Gianni Bulgari before setting out on his own.

When Gruosi started De Grisogono, he did so with a laissez-faire attitude towards commerciality. He built his brand on creative risks that have set him ahead of the curve in terms of trends. Just as he did with black diamonds, he rebranded low-value, heavily included, cloudy diamonds as luxurious Icy Diamonds. He was a forerunner in the use of bespoke alloys when he introduced brown gold and never shies from an extravagant design, living up to the brand’s motto: the beauty of audacity.

The next few years will see even more risks for Gruosi, as the jewellery maestro gives up his controlling stake in order to push for even more expansion. De Grisogono has 15 monobrand boutiques and more than 140 stockists worldwide but a sale of 75 per cent of the business to a group of investors in 2012 has given the jeweller a reported $100 million cash injection to fund further expansion, with a particular focus on the Middle East – last year the brand opened its first subsidiary with the support of the Dubai Investment Economic Development Agency.

But for Gruosi, taking risks is nothing new and after all, this charismatic champion of beauty has a powerful talisman at his side. “I do believe that stones hold mystical powers,” he says with a smile. “They have always brought me luck and success.”