“You’re in the wrong office, come with me downstairs to the Dragon offices to see my real passion,” says Macsteel company chairman in his tempered South African accent as I arrive at the Macsteel offices on the 25th floor of Jumeirah Lakes Towers’ Silver Tower. Two elevator rides later, we were on the seventh floor but in the headquarters of Dragon Racing International. The two offices are worlds apart and it is easy to see why this is Leon Price’s favourite of the two.

The glass-clad office is reminiscent of a luxury car museum complete with a high tech McLaren race car simulator and a collection of replica model cars that would make Jeremy Clarkson go weak at the knees. The first thing you notice is the giant black dragon sculpture greeting you at the entrance, an emblem of Price’s affinity with the Far East and the place where he built much of his fortune.

It is only a fraction of his entire model car collection; the rest are displayed in his homes and offices around the world, mainly in Hong Kong where he spends most of his time. The most impressive are a series of red 458 GT3 Ferrari replicas made by British company Amalgam – fine models, each costing about $8,335. Price commissioned models of the same race car in three different years (2011 to 2013) to match the real race cars he owns, which are available for track day experiences at Dubai Autodrome or Yas Marina Circuit in Abu Dhabi.

But Price’s real passion is for collecting Conti Le Mans cars, one of the most famous model car ranges in the world. According to Jake Carlin, marketing manager for the dragon racing firm, Price has “one of the most substantial collections in the world”.

The most precious and perhaps most valuable (neither would disclose the cost of this one) is a scratch-made vintage Bugatti fashioned in Italy and a vintage Auto Union replica bought from another collector in the south of England. The real Auto Union car belongs to Formula One boss Bernie Ecclestone.

Price, 63, stepped down as the CEO of Macsteel, a South African steel manufacturing, trading and shipping firm, to concentrate on setting up Dragon Racing International, a new business venture in Dubai. He still remains chairman and a substantial shareholder of the billion-dollar steel company with offices in the US, Dubai, Hong Kong and Holland, where it recently relocated its headquarters. 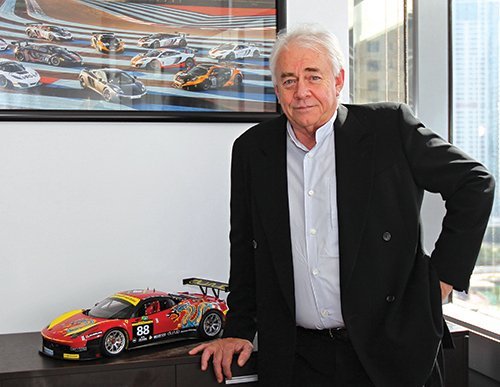 Price moved to the Far East from his native South Africa in the late 1970s after he was offered a posting with his home country’s biggest commodity trading company, Leo Raphaely & Sons, where he had already been working for seven years in Johannesburg. The company was later acquired by Macsteel, a move that Price concedes he helped engineer with his management partners.

“The Raphaely group did not have any funds to grow internationally and we wanted to do that,” says Price of the takeover.

Price became chief executive of Macsteel in 1996 and helped turn the global company into a multi-billion dollar business, making it one of the top five companies in South Africa prior to selling off its US operations, which made close to $1 billion.

Macsteel has been widely described as one of “South Africa’s most secretive companies” something Price does not deny. As the company is unlisted, it is not obliged to disclose profits to the public or declare dividends.

“We are very private for a reason and we like to stay that way,” he admits.

Describing himself as a “gentleman racer”, Price now spends his time competing alongside his long-term friend and dragon racing director Rob Barff in competitive 24 hour races around the world. As well as his private collection of model cars, he owns the largest private fleet of McLaren race cars in the world.

The dragon racing business was conceived in 2012 but only launched in the UAE last April. It is comprised of a team of professional drivers, coaches and engineers who tailor track day driving experiences for corporate clients in luxury racing cars based in Motorcity. It costs on average about $116,000 for a full track day experience, which includes a six car package with three people per car and six pro drivers. 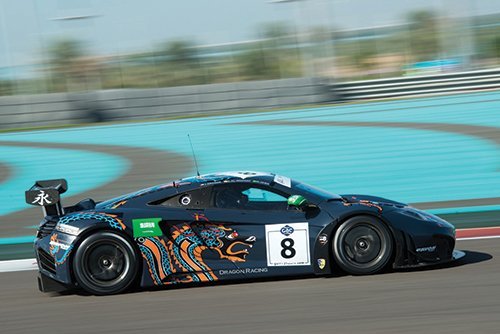 Price’s love affair with cars started at a young age. He says he was born with a naturally competitive streak into “a well-to-do middle class family” not far from Kenilworth horse racing track in Cape Town. His father was a bookmaker, as was his father before him.

“The horse racing business was all they knew,” says Price but at 18 he was told to get a real job.

Although Price’s corporate racing model is not a new one – Ferrari and other big racing companies have done it for years in Europe – Price believes a combination of good weather from November through to March, luxury hotels and world class restaurants all conveniently located in both Dubai and Abu Dhabi result in the perfect business climate for his dragon racing concept to thrive in the UAE.

Price says the idea stemmed from his own corporate racing day experience organised by Ferrari in the UK.

“We got taught first how to drive the road car on the track quickly and then if the professional thought we were capable enough, they would put us in a race car. We liked the concept and saw the executives were having the time of their lives so we thought, why doesn’t Macsteel do that?”

From then on Macsteel would fly in its “best clients from all over the world as well the CEOs of some of its largest subsidiaries” to corporate track days hosted by Ferrari in England. This went on for four consecutive years until the 2008 financial crisis hit and it was no longer deemed acceptable for chief executives to be racing around in expensive Italian red cars.

Price says they stopped, not because his company could not afford it, but because they had to be “conscious about their image”. “You can’t be seen to be spending money,” he explains.

“I think when Europe really comes out of its doldrums and America starts stabilising and it looks sustainably positive going forward and the East picks up a little, the big companies will go back to doing that type of entertainment and hopefully there is more here in the Emirates in a compact space than there is in Europe.”

But it was not just the bleak economic outlook that put a dampener on corporate entertainment’s future in Europe for Price. He says the inconvenience of having to take multiple flights, staying in hotels that were hours away from the track and having to ship in your own race cars for an event all took their toll. So when he decided to step down as chief executive from Macsteel, he combined his love of motor racing and business in the form of dragon racing.

“Take, for example, Mugello. You would have to stay in Florence and drive out to the track every day because the hotels and the restaurants are just not there,” he says.

“It is not just about the racetrack, it is about the arrival, having a great dinner and staying in a wonderful hotel and talking a bit of business. [The UAE] has got it all, it has absolutely everything.”

As well as his private collection of model cars, Price owns the largest private fleet of McLaren race cars in the world.