He was a renowned playboy – but Lapo Elkann has turned his back on his former hedonistic life and turned a corner. He tells GC what inspires him now

Lapo Elkann’s reputation precedes him. As well as being a member of the famed Italian Agnelli family behind the luxury sports car brands Maserati and Ferrari, the Fiat group and Juventus football club among others, he is one of Italy’s most iconic style ambassadors and former hedonistic playboys.

A much-publicised overdose nine years ago resulted in what can only be described as a purge of every part of his life. After a stormy youth, Elkann seems much more sedate at 36 years old.

He is now the chief executive of his own public company Italia Independent, a luxury product design company that sells sunglasses, as well as running Independent Ideas, a creative branding agency. He has just added an extra bow to his arrow by collaborating with Gucci to create a capsule collection of made to measure menswear.

The Gucci partnership was signed on a wintry morning with the brand’s creative director Frida Giannini in the Italia Independent offices. Elkann’s own factory is located in a remote industrial area on the outskirts of Milan, far from the glitzy fashion avenues he is accustomed to.

“I said I would not go into fashion and I am not,” he says. “This project is not some dated capsule collection, it is a project of timeless style.”

His country might have found it difficult to replace disgraced prime minister Silvio Berlusconi, but Elkann embodies a new wave of Italian entrepreneurial spirit. His values are still deeply rooted in culture and classical elegance but he reinvents them with a twist. With Gucci, it is the first time Elkann, who has become a barometer of Italian style, came into contact with fashion as a designer. He had sworn he would never do so.

“I define it more like a way of twisting the DNA of the traditional Italian made to measure with a spirit of renewal. Especially in terms of the fit of materials. It’s a global approach to style.”

Unlike the capsule collection, the association between Giannini and Elkann was not new. They worked together on the launch of the special Gucci Fiat 500 on both the creative and communication side, and there were also collaborations between the fashion brand and Independent Ideas in 2011.

Giannini did not need persuading about Elkann’s style credentials. Vanity Fair magazine voted him the world’s best-dressed man and he is considered one of the world’s most eligible bachelors.

“Like in my family, we share a common and strong passion for beauty, know-how and Italian culture,” he says. “It is exactly what we’ve been trying to do with these new products.

“It took us more than a year to develop this idea of a new contemporary made to measure department.” 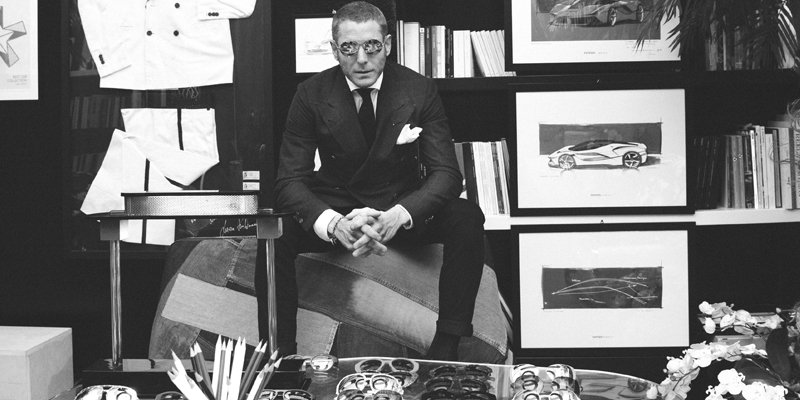 So is this the future for Italy’s ex-bad boy turned entrepreneur- creating products for other brands after his successes with Fiat, phone brand Vertu – for whom he created the constellation blue handset in 2012 – and Gucci?

Elkann is a man with deep-rooted ambitions. Despite being born into wealth and privilege, he continues to hammer away at his convictions and vision and they both serve his need for independence.

It is no secret that before he left Fiat (he is still the largest shareholder along with his sister and brother, who is the chairman of the group), he turned the struggling car manufacturer’s fortunes around. The share price had dropped to just three euros and by the time Elkann left it was 23 euros.

I am very passionate about the things I do, and everybody knows I am fond of cars. I just needed to do things my way. I need my freedom. It is my shot of adrenaline

Lapo started modestly a decade ago with a range of super-light carbon glasses. Today, the start-up has become a group and has ambitions to be the “the Swatch of the glasses world”. Elkann creates dozens of new designs every year and innovation is his driving motivation; his latest release claims to be unbreakable.

Meanwhile Italia Independent recently announced a collection with the designer Karl Lagerfeld. Glasses represent 85 per cent of the company’s revenue but Elkann’s aim is to “bring Italy’s image far ahead. I am mainly interested in mixing talents and influences and collaborating with people from various horizons.”

His future ambitions include working on the design of a megayacht and creating visual equipment for police forces.

I just needed to do things my way. I need my freedom. It is my shot of adrenaline

As a constant reminder, his breaking away is symbolically tattooed on his forearms. Elkann has learned how to surround himself with the right people, which he credits for his success, not just in business but also in his personal life over the past decade. He is now teetotal and drinks nothing stronger than decaffeinated coffee. “I have had my share of temptations, my demons. I have overcome them; I am more mature and focused. All the rest is behind me.”

Last year he published a bestselling book in Italy called The Rules of My Style. He was also inducted into Detroit’s automative hall of fame – a great feat considering his picture hangs alongside that of his great-great-grandfather Giovanni Agnelli and Enzo Ferrari. He plans to set up a children’s foundation and is preparing to represent the brand Italia at the 2015 Expo in Milan.

Despite his personal demons, the new reinvented Elkann seems unstoppable.