Jo Malone had barely set foot in Shanghai in 2015 when things got off to a rocky start. Her newly created fragrances, which were being showcased as part of a event celebrating British innovation, had arrived but none of the equipment on which it was supposed to be displayed had been allowed through customs.

In desperation, she went on a mission and chanced upon an Ikea, where she splashed out $300 on a makeshift pop-up stand. Few in the audience at the event, where she appeared alongside the likes of designer Kelly Hoppen and chef Angela Hartnett, would have guessed the extraordinary lengths she had gone to for an event pulled off with aplomb. But such a comeback is typical of the 51-year-old entrepreneur, who is back in the business she knows best after selling her eponymous fragrance brand.

Malone has spent years in the wilderness after a contractual clause prevented her from re-entering the market following the sale of her perfume line. But her enforced exile is now over with her venture, Jo Loves, where she is back creating bath products and candles with her trademark unusual combinations of scents. 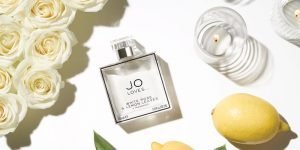 Inside her store in London’s Belgravia, the air is filled with the sweet citrus smell of pomelo as customers clamour for a space at the luxury fragrance store’s brasserie bar, where you can sniff a cocktail shaker full of frothy shower gel.

The perfume mogul herself sits behind the shop floor in an all-white room. The bespoke candles took “three years of gruelling creativity and hard work” and involve a scented interior and base, with the customer choosing which two fragrances to combine. How does she know which ones will work together? “That is what has taken me three years,” she laughs. “We tested about 700 fragrances to work out which ones will work. We have done all that hard work for you.”

She is no stranger to hard graft. As a child, Malone lived a “hand-to-mouth existence”, spending Saturdays selling her father’s paintings in markets. She discovered a knack for being able to sell and to “tell a powerful story and emotionally connect with the buyer”.

“I was probably better at it than he was,” she says. She left school at 14 to care for her mother, who had worked for the American cosmetics firm Revlon, after she suffered a stroke. Two years later, she left home and started her own business making bath oils from the kitchen of her one-bedroomed flat. From there, she slowly grew the Jo Malone brand, opening her first store in 1994 and turning her name into a global luxury business selling perfumes, candles, body creams, oils and bathing products. 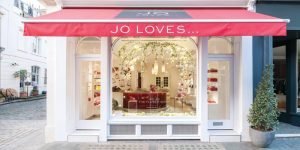 In 1999, she sold the business to Estee Lauder Companies in a deal reportedly worth millions but stayed on as creative director until she left in 2006. For five years after she left Estee Lauder, she was contractually prevented from re-entering the market. Compelled to create and unable to do so, it was a “very unhappy time”, she says.

But for now, the mother-of-one is back doing what she loves, building her new brand. “It was never about one little shop on the street,” she says. “We are much bigger behind-the-scenes than what you see front-of-house. Jo Loves was always about building another global brand. “I had a big responsibility to make sure the consumer was not confused – that they did not think the two companies were connected. We had to be very structured, ordered and concise in what we do.”

Her rise to become a millionaire has not been without its stumbling blocks. Malone is severely dyslexic and “really struggled until I was about 15. Even now I still confuse left and right and have difficulty telling the time”. In 2003, when she should have been enjoying her success and time with her young son, she was diagnosed with an aggressive form of breast cancer and had a double mastectomy. More recently, her husband and business partner Gary, to whom she has been married for more than 30 years, fell seriously ill shortly before she opened the Jo Loves store in October 2013. Yet Malone is philosophical and has learned to live in the moment. She says she is an artist before she is an entrepreneur: “I have to make fragrances. I would do this for nothing. This is my joy and makes me feel I have something to give to life.”

Malone has a neurological condition called synaesthesia, which affects sensory perception. It meant she could smell colour and sound as a scent from a young age. “When I create a new scent, I have all these notes in my head, all these memories connected with fragrance and I will start to hum a fragrant tune in my mind. Then, piece by piece, I link it all together,” she says.

A recent appearance on Radio 4’s Desert Island Discs helped drive sales for Jo Loves. “The letters we had were just staggering, from parents whose children are dyslexic to people starting businesses and those who have lost businesses – and interestingly, lots of men who were really inspired by it.”

A book chronicling her life was published last year as well. It clearly delights her. “Not bad for a dyslexic,” she laughs.