A touch of glass

While many entrepreneurs are hailed for their vision, ambition and sheer drive, there are some that tear up the rulebook and are at best unconventional and at worst, stumble into being entrepreneurs.  Childhood friends Alessandro Forte and Stefano Ottone sit somewhere in between. The stylish Italian entrepreneurs started selling sunglasses in Ibiza so they could stay on the party island all year round and stay clear of their parents’ nagging. Yet within a couple of years they had five flagship stores, including outlets in Milan, Portofino, Taormina and Capri in Italy and one in Dubai.

After the twenty-somethings decided studying was not for them and left their hometown near Milan for island life in Ibiza, the pair took jobs as nightclub promoters. But they knew they needed something else to keep them from having to go back to Milan in the winter. “We found a little store in Ibiza port and started to sell fashion sunglasses that were a little crazy to match the people partying on the island because no one else was really doing it at that time back in 2007,” says Forte.

“We started to sell branded vintage sunglasses and they went really well. We had to put security at the front of the store because so many people were coming to our store. At the end of our first year after going back to Milan for winter, we returned with our own style of sunglasses that we designed ourselves back home in Italy. Our plan was to start selling them inside vending machines in nightclubs.” Ottone, who is the designer, says: “We distributed only one model – a classic aviator style in 30 different crazy colours. They were only €20 euro a pair but we sold 20,000 pairs – all of our stock – in only two months. It was incredible to see all of Ibiza wearing our sunglasses.” 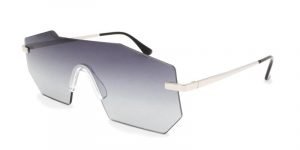 After a second season of selling sunglasses in Ibiza, the stylish duo won the attention of European fashion bloggers, which prompted them to start their own collection in 2010 with five new designs. Glassing quickly emerged as one of Italy’s most cutting edge brands, focusing on using innovative materials such as hand painted crocodile skin, acetate and nylon, often combined with unusual shapes moulded to fit the face.

Although neither Forte nor Ottone formally trained in design, the pair collaborated with Milan’s famous Istituto Marangoni to allow students to participate in everything from the design process to development, marketing and production. Ottone also teaches a term-long design class and both men work as mentors to encourage young design students.

Fans of the brand include Kate Moss, Justin Bieber, Beyoncé and Jay-Z, P Diddy and Cristiano Ronaldo. The ultimate accolade came when the godfather of Italian fashion Giorgio Armani came into their store in Portofino and bought several pairs of sunglasses.

Glassing has also collaborated with Adidas to design sunglasses and optical glasses for AC Milan football team as well as Pacha Ibiza to produce a special collection. “Mischa Barton was the first celebrity to wear Glassing and P Diddy stopped me on the beach in Ibiza to ask where he could get a pair,” says Forte but for him “the real honour was when Giorgio Armani bought our sunglasses.”

The life-long friends were so star-struck they did not introduce themselves to the fashion legend, even when he questioned the sales assistant about the designers. “We just stood there in the corner,” says Ottone. Forte adds: “We let the sales assistant do all the talking. We could not believe he was in there and buying our sunglasses.”

The brand is currently distributed in more than 1,400 stores and luxury boutiques worldwide, including Harrods in London, Galeries Lafayette in Beijing, Twist in Hong Kong and Mr M in Beirut. A new flagship store will open in Dubai that will be in addition to the two pop-up stores – the first was in JBR and the other opened last December in City Walk 2.

In keeping with their unconventional style, the entrepreneurs created their own Glassing yacht store last year, a real yacht that has been customised as a shop, becoming the first ever seaborne optical store in the world. They plan to dock at glamorous resorts all over Europe, which will no doubt only increase their celebrity following.