Ever wondered what happens to a 258-seater jet when it starts to look a bit dated? “Cut up in the desert,” says Sir Tim Clark, the long-standing president of Emirates airline, matter of-factly.

“Sad but that’s what you have to do. They are no use to us.”

Emirates’ Airbus A340-500 aircraft may only be eight or so years old, but some of them will soon end up in the warm waters of the Arabian Gulf, surrounded by coral and divers.

“They have no value so we strip out all of the parts as best we can and then the government takes them, sanitises them and makes them environmentally friendly and creates reefs,” says Clark.

It may seem brutal but there is no room for sentimentality in the fast-paced environment at Emirates, which is already the world’s biggest airline by international passenger traffic and growing rapidly. It is out with the old and in with the new after Emirates placed the biggest order in the history of civil aviation for larger, far more fuel-efficient planes in November last year.

Emirates is already the biggest operator of A380 super-jumbos – it took delivery of its 44th at the end of last year – and it has a total firm order book of 385 aircraft, also including Boeing 777s and Airbus A350s.

Although the real sums that change hands over aircraft deals always remain cloaked in secrecy, the list value of Emirates’ order book is $166bn.

It’s an eye-popping number but then that’s only to be expected for the national carrier of Dubai, which is now firmly back in expansion mode following its debt crisis of 2009.

Last year Emirates airline carried 43 million passengers. Last year’s record-breaking order will not only help replace some of its older, fuel-guzzling jets but will also help it to reach a target of 70m passengers a year by the time the World Expo comes around in 2020. Not bad for a carrier that started out in 1985 with just two leased aircraft and was, for a long time, scorned by the establishment in the aviation industry amid accusations – false ones, Clark hastens to add – that it was being propped up by subsidies.

“Dubai… has kickstarted again in a very big way, so pressure is on,” says the 64-year-old president, who is on remarkably chatty form, despite having just completed the latest part of a journey that has taken him to Boston, Seattle, Sydney and now London for a meeting with the mayor. 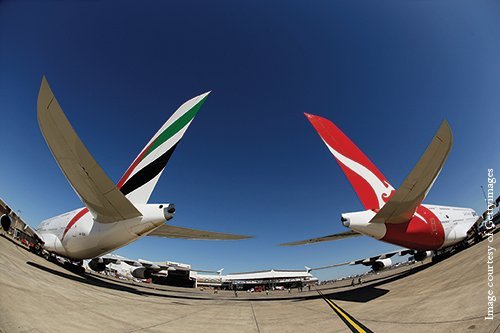 Clark, an aviation man through and through who has been part of Emirates’ senior management team since its inception, is on Boris Johnson’s London advisory board, which must make for interesting conversations given that Dubai, which will have two hub airports by 2020, is attracting business away from London and other European airports, while policymakers in Britain go through another lengthy process to decide where to build the next runway in the south east of England.

The authorities in Clark’s chosen home are spending $7.8bn to enlarge the existing dominant airport, Dubai International, so that it can handle 90m passengers a year by 2018. The emirate’s second airport, Al Maktoum International at Dubai World Central, close to the site where the World Expo will be held in 2020, is also being expanded into a five-runway mega-hub which will accommodate 160m passengers a year.

With the independent Airports Commission – launched in the UK in 2012 to maintain its status as an international airport hub and helmed by the economist Sir Howard Davies – not due to decide on where best to build London’s next runway until after the general election next year, Dubai authorities must be rubbing their hands with glee.

Clark, who was born in the Dutch Antilles and attended boarding school in Kent, is reluctant to brag at the expense of the nation that handed him a knighthood as part of the New Year’s Honours list.

“They [the Dubai authorities] don’t set out to say: ‘Ha ha, look at them’,” he says. “It’s a fact. Business people coming from India, Pakistan, Sri Lanka, the Indian Ocean – whereas in the past they might have gone through European hubs, they don’t, they come to us. The connectivity is much quicker. There are no visa requirements for them to come through Dubai. If a Sri Lankan comes through London even on a transit basis, he’s got to have a visa.”

London is still an enormous draw for passengers around the world, says Clark, but he believes the decades of political squabbling over airport expansion has cost the UK – and the national flag carrier, British Airways – dear.

“I said to Howard Davies, if you unconstrained Heathrow today in 2014, where would it be if you allowed it to grow with a third and fourth runway? I said you’d be at 130m [passengers a year] now, not 60m to 70m.”

Clark has told the Airports Commission he believes the easiest option for Britain is to put a third runway at Heathrow, followed by a second at Gatwick. Boris’s idea of a brand new hub airport in the Thames Estuary is “great”, he says, except he isn’t clear how people would actually get there: “You would have to make the M25 probably 10 lanes on either side.”

Whatever decision the commission makes, Clark is adamant that connections to London’s airports, where Emirates is a significant customer, must be improved as a matter of priority. “If you want to come from Gatwick up to central London you really don’t want to get on a train that stops at Croydon. You want to get on a high-speed train like Lufthansa does, 200 miles an hour to Stuttgart.”

As well as drawing business away from European airports, Dubai has been boosting its international passenger traffic courtesy of Emirates’ tie-up with Qantas, in which Australia’s flag carrier moved its stopover for flights to Europe from Singapore to Dubai.

Since the partnership was announced in September, however, the news out of Australia has made for painful reading. Qantas’s chief executive, Alan Joyce, has been embroiled in a battle to keep the Aussie airline flying. Last month Qantas unveiled a A$252m half-year loss and is having to axe about 15 per cent of its 30,000-strong workforce.

It hasn’t helped that they [Qantas] have had problems. When that happens to a relatively small group, there are other things that fall slightly by the wayside.

Before arriving in London, Clark was in Sydney for what he described as “our first get-together of any real flesh” since the partnership was launched. The arrangement was something of a watershed moment for Emirates which, apart from a foray into the Sri Lankan aviation industry in the late 1990s, has always stuck to what Clark admits is a “fairly purist” business model of organic growth. It has always shunned airline alliances, such as oneworld and SkyTeam. With the exception of codeshares, Emirates has always doggedly gone it alone.

“Dubai has been a beneficiary. We have had many Australian tourists – 260,000 in the last 10 or 11 months have stopped over in Dubai.”

But he admits: “It hasn’t helped that [Qantas] has had problems. When that happens to a relatively small group, there are other things that fall slightly by the wayside.

“I’m not saying for a moment that Alan has let our relationship between the two companies and the endgame … slip, it is just that he has got quite a tough situation on his hands.”

In 2012, Emirates Group, which also includes the Dnata air services group, made a profit for a 25th consecutive year. At the halfway stage of the last financial year, which fell on September 30, Emirates airline announced net profit of $475m, up two per cent, despite high fuel prices and economic uncertainty in some global economies.

From the outside it may seem as though everything is plain sailing for the group, which remains wholly owned by the Dubai government. Sir Tim says profits are not rising as much as he would like and nothing can be taken for granted in the aviation industry, which is littered with risks, from high fuel prices, to geopolitical events.

In February, for instance, Emirates launched a new route to Kiev only for the Crimea crisis to break out.

How is that route faring? “Badly,” the affable airline veteran says, laughing. “A few years ago I used to say to my team when we were preparing for the next year: ‘Listen, there will always be two global traumas, which will affect us quite badly. We can’t budget for that but we must expect it.’ Now I say there are five.”

Even so, Clark remains confident Emirates will continue to defy its critics and stamp its authority on global aviation.