By bringing fashion straight from the runway to clients’ closets, Aslaug Magnúsdóttir has revolutionized online retail.

Aslaug Magnúsdóttir is one of the most accomplished women in the fashion industry. She is the Co-Founder and Chief Executive Officer of Moda Operandi, an online luxury retailer that has taken the global fashion world by storm since its launch in 2010. The site enables members to pre-order fashion right off the runway, giving fashionistas an opportunity to buy clothes six months before they hit the department stores. Traditionally there is a lag that occurs because fashion shows preview what is coming up for the next season well in advance.

“The beauty of our concept is that we offer women access to the full runway immediately.”

said Magnúsdóttir in an interview with Global Citizen.

In an industry where being the first to have or wear an item puts you at the top, the concept has taken off. Magnúsdóttir, who was previously a vice president at luxury private sale discount site, Gilt Groupe, says their concept is quite different than other luxury retailing models. They are focusing on high end positioning and don’t expect to have a high volume of memebers as Gilt does. Also clients will not find items on discount. Instead they are willing to pay full price to have it first. 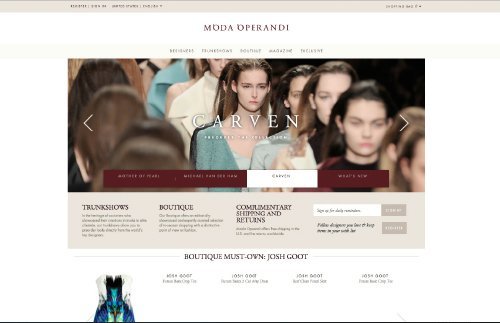 The company, headquartered in New York, tripled sales the second half of 2012, vs. the year before. They have 250 designers offering private trunk shows and an average purchase is $1,400, which goes up considerably during fashion weeks.

Moda achieved a major milestone last summer when they raised $36 million in funding from venture capital firm RRE Ventures and several strategic investors, including IMG and LVMH Moët Hennessy Louis Vuitton. The company plans to use the money to further grow the business internationally. Magnúsdóttir said the Middle East is a key market for the company. In the last quarter of 2012, 20% of their sales were generated from the region.

“People here have a real appreciation for luxury items. They love getting the pieces that are special and different,” she said.

The company is  also investing in the back end logistics side of the business by opening a new warehousing facility in the UK to service international markets. “Initially we shipped everything from New York, but as of last summer we are also shipping from the UK. That both speeds it up and makes the delivery costs a little bit lower.”

A native of Iceland, Magnúsdóttir has an impressive resume that includes work for an investment firm that specialized in funding fashion companies. The Harvard Business School graduate who also holds a law degree from The University of Iceland, says another key differentiator of the business is the data they collect on what clients want to buy. This is not only valuable for them, but also to the designers, giving them a testing ground to see which of their runway offerings will sell immediately after a show—information that they can then share with department stores who will sell the same styles in stores later.  With Moda designers don’t need to make an investment into producing every piece they showcase on a runway (which is often time consuming and expensive).  Instead Moda takes orders from clients and the designers produce only what has been ordered. It’s an efficient and lucrative model.