Changing the Face of On Demand Viewing

Like so many other twenty somethings living in the Bay area of San Francisco in the late 1990s, Carlos Tibi witnessed the birth of Silicon Valley’s tech wave first hand. Now living in Dubai, the 39-year-old has embraced a new phenomenon that is sweeping global audiences: the culture of “binge watching” and he has decided to cash in on it by bringing the first ever Arabic entertainment platform, Icflix, to the region for the first time.

“While I was in the US, I felt this pent-up demand for Arabic content from the Indian and Arabic diaspora,” says the Icflix chief executive from his industrial-style office in Dubai Media City.

“They couldn’t find it anywhere else and if you found it pirated, it would be chopped up into different pieces so you had to watch one half first, then the other.

“Everyone was asking if they could get something like Netflix but in Arabic so I thought, why don’t I do something with Arabic content?”

Tibi graduated from university in Canada in 1995 with a degree in management information systems. The Canadian-Palestinian then spent 15 years working for consulting firms in the US, travelling between Europe and South America working with clients such as Google, Oracle, Apple and Dreamworks, “helping them to architect better solutions for their customers” at the beginning of the download streaming boom. 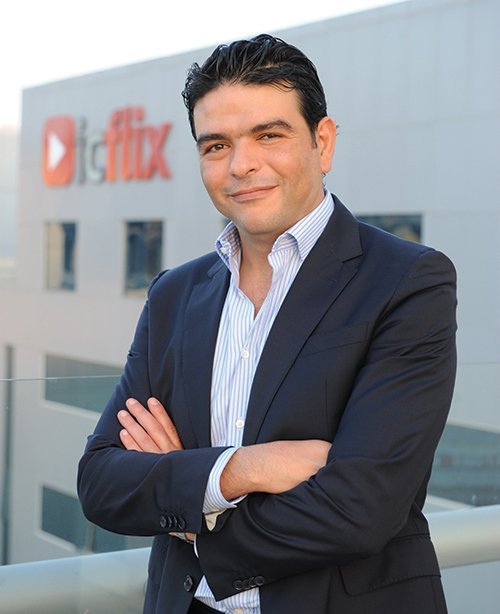 “It was the beginning of the music streaming era,” he says. “I advised Fortune 500 companies and had most Fortune 100 companies as clients helping them to structure and make their businesses more efficient by leveraging technology solutions.”

It was during Tibi’s time in the US that he came up with the idea for Icflix, an entertainment platform combining Hollywood, Bollywood and Jazwood content – a term coined by the company to represent Arabic cinema and programming.

Tibi hasn’t looked back since. He moved from the US to the UAE in 2011 and got financial backing from UAE-based Lebanese entrepreneur Fadi Mehio, who is Icflix’s chairman and managing partner Abdelrazak Mounayar, who deals mainly with content providers and producers in the Egyptian and Arabic markets.

The company has its headquarters in Dubai with offices in Egypt and the Czech Republic. The majority of Icflix’s Jazwood content is acquired, digitised and restored in its Cairo office while Prague acts as a technology hub for the group.

Tibi admits that Icflix is still “in the soft launch” phase, but says he is confident it already offers its 10,000 paid subscribers across 40 countries better quality content than its main competitor, Netflix.

“Our movie library is better than Netflix’s movie library,” he insists. “It is smaller but it is more selective. They don’t have the evergreen library series such as The Godfathers, Mission Impossible, Rocky, movies that you will watch over and over again. Netflix focuses more on independents.

Icflix charge a flat fee of $7.99 to subscribers, who can then access a library of content on up to five devices per household. Pay-per-view is yet to be launched but Tibi says as soon as a new release movie is “outside of the cinema window” Icflix will have it on its platform for $3 per movie.

But Icflix’s biggest challenge is not luring subscribers from its biggest competitors in the US or UK, namely Netflix, LoveFilm, Virgin TV and Amazon. Each of these providers has one common enemy to defeat – piracy.

For Tibi it is clear-cut: the studios are to blame. He says the timeframe between a movie being made and the release date is too long while it is up to the studios to solve the problem if piracy is going to be stamped out of the industry worldwide.

“By the time studios make the content available, it can be a three to four year window,” he says. “These guidelines were set 50 years ago when there was no digital, just your standard TV and cinema, with no other devices to access content.

“Let’s adjust those window cycles so that when it comes to the cinema, we can get it and charge people a premium of $6 to watch it. People would rather pay and be guaranteed a high definition version than trial and error searching for links.”

Tibi concedes piracy “is a constant threat” to his business but like everything “there are always going to be thieves out there and people who want to take the shortcut but we have the law on our side.”

He points to the fact that in the US, which has one of the highest piracy rates in the world, Netflix still has 40 million plus subscribers. “So why is Netflix adding three million new subscribers every quarter?” he asks. “There is so much piracy out there, yet they all have Netflix accounts.”

But the question is how fast will the studios adjust to this new reality? As quickly as pirate websites are shut down, new ones appear.

Tibi insists Icflix is somewhat immune to piracy because “Jazwood is our strength” and its not pirated to the same degree as Hollywood or even Bollywood is. Meanwhile, the options for the viewing public just got a lot better.