Design of the times

Chad Oppenheim has only been speaking for 30 seconds but the celebrity names are already coming thick and fast. There is the singer Robin Thicke, who was shooting a music video at Oppenheim’s Miami home a day earlier, Nicki Minaj, the guest rapper who never showed up to the shoot and Elle Macpherson, the model who posed for Harper’s Bazaar at House on a Dune, an idyllic, sunkissed private home he designed in the Bahamas. She loved the house so much, she promptly asked Oppenheim to design her a property.

It might sound like a collision of worlds for the celebrated American architect but there are plenty of high profile names who take a keen interest in architecture – not least because designing their own homes to be as private and aesthetically pleasing as possible is intrinsic to their lifestyles. Oppenheim designed the $100 million Bel Air Villa for Transformers director Michael Bay, a 3,000sq m Bond villainesque lair built into the hillside looking down on Los Angeles. Michael Mann shot chunks of 2006 blockbuster Miami Vice in his Villa Allegra. 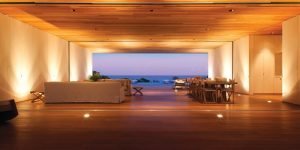 And Pharrell Williams, the singer-songwriter behind the tune Happy, has commissioned Oppenheim to design a church to be called the Altar of Sound and an eco treehouse-themed resource centre, both in the superstar’s hometown of Virginia Beach. “Pharrell is a renaissance man,” says Oppenheim. “He is just this amazing creative force. It is not hype — the guy is a genius in every aspect of existence.” Close friends for several years, the pair are also working together on Ice Cream City, a citywide masterplan to give a holistic redesign to the Overtown Miami neighbourhood.

Oppenheim, who holds an honorary post teaching at Harvard’s Graduate School of Design, called on the musician to deliver a lecture. “Without any preparation or prior thought, he just riffed for 30 or 40 minutes. It was the most mind-boggling talk,” says Oppenheim. “My students’ mouths were a-gasp, as was mine. These are some of the most intelligent and intellectual design minds in the world and they were just blown away.”

Oppenheim was just seven years old when he decided he wanted to build houses for a living. He was inspired by his father, a self-made businessman, who wanted to build a dream home for his family. “I just became really engaged in the design process and from that point on, it really compelled me to do this for the rest of my life,” he says. 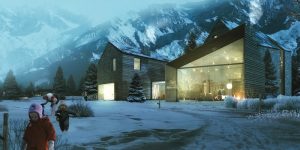 At 29, after studying at New York’s Cornell University and Boston’s Harvard University, he founded his firm Oppenheim Architecture and Design in Miami within a year of graduating. A year later, he landed his first three awards from the American Institute of Architects (AIA), including the outstanding young architect of the year trophy. Fifteen years on, he has clocked up another 50 accolades – including 33 from AIA – and is recognised as one the most distinctive architectural voices of his generation.

The 44-year-old is responsible for groundbreaking eco-centric designs in 23 countries as well as building celebrity homes. He was behind the 50-storey Ten Museum Park, a futuristic, luxury condo block with 12 private vitality pools complete with water jets and hydromassage. He also designed the headquarters of landscape architecture firm Enea, set on the Obersee shores of Switzerland and Manila’s three-tower Net Metropolis commercial centre, the Philippine government’s first ever sustainable design. In the Middle East, his work includes the Wadi Rum Desert Resort, an eco-resort of 47 desert lodges carved into the sandstone cliffs of the Jordan desert and Isla Moda in Dubai.

There is little to link these eclectic designs but environment is always key, both aesthetically and ethically. “To me it is not just about architecture, it is about the whole sensibility of how life can be lived,” says Oppenheim. “It has to exist and engage with all the senses. It is not only what it looks like but also how it sounds, smells, the taste and the texture – these things are all critical.”

With offices in Miami, Los Angeles and Basel, Switzerland, he is in demand from both high profile names and high net worth individuals. Oppenheim says he does not have a style but bases his design on “a very deep understanding of the site and the client”. “I would like to say we create works that are timeless – something connected to the culture, history, climate and sensibilities of the place in a very abstract and powerful way, something that will be eternal and transcend passing styles. We are thinking of how things will look 500 years from now.”

The hard truth about architecture is that it remains a necessary collision of creativity and commerce. “It is definitely a business. We treat it as art but it is something that is very much part of the business world,” says Oppenheim.

“We pride ourselves on making our clients successful, making sure they enjoy a great return on their investment, whether it be an office building, a residential tower, a hotel or a house.”