Adam Brown was on holiday in India, lounging by the pool. All the women at the five-star resort looked great in swimsuits or cover-ups – but the men’s style left something to be desired. “I thought to myself, why are all these otherwise fashionable men all wearing voluminous, baggy, shapeless shorts or briefs or board shorts with everything hanging out?” he says. The real eureka moment came when Brown had to change for lunch. “I thought, “Why do I need to keep changing? I don’t want a swim short, I want a short I can swim in.” That was what prompted him to come up with the idea for his resort wear company Orlebar Brown, with a focus on pieces you can pack for a holiday and can easily take you from poolside to dinner and back.

With no background in fashion (his previous work experience was as a major donor fundraiser for the charity sector and a portrait photographer), Brown started working on his business in 2005 – sourcing fabrics, finding factories and getting patterns made. Eighteen months later, he launched his company. As for most entrepreneurs, the early days were tough, with Brown operating out of his apartment with a computer in the spare room and a self-storage unit to keep his stock. “I did everything myself. All the customer service, all the deliveries, going to the factories and trying to find stockists,” he recalls. “If an order came through I would go there, iron the shorts, stand in queue for the post office, pack them up and post them.” 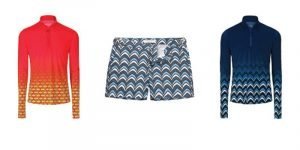 Still, Brown considers that early experience as essential. “There was something great about that time because you got to meet all the customers, hear what was right and wrong and you learned so much. It was really one of the best ways of doing it but at the time, I only did it that way because I could not afford to do it any other way.”

Orlebar Brown clothing incorporates traditional tailoring methods in resort and holiday wear. The swimming shorts are based on the 17-piece pattern of a man’s trousers. The detail is intricate with four-piece shaped waistbands, darts for shape and zipped fastenings. Every item is rooted in the belief that form follows function. With well-cut and slim fitting pieces as well as lean silhouettes and understated simplicity, the shorts are meant to flatter. The line also includes polo shirts, tee shirts, trousers and light jackets.

Five years after launching his brand, a career highlight came as he watched a glistening, shirtless Daniel Craig emerging from the ocean in a pair of baby blue Orlebar Brown swim shorts in the Bond film Skyfall. Another career highlight has been Brown’s collaboration with iconic Italian brand Pucci. A customer sent him two metres of vintage Pucci fabric to make shorts. The following weekend, that customer was lounging around a pool with Laudomia Pucci herself, the daughter of the label’s founder Emilio Pucci and chief executive of the brand. “She loved them,” he says. “She was so impressed with the shorts, she sent me an email requesting we work together.”

The business now employs over 50 people, has nine stores (of which five are in London) and is stocked in more than 300 boutiques worldwide. The UK is its biggest market, followed by the US, which makes up about 30 per cent of sales. Brown is thrilled by this success. “I am always pleasantly surprised. I love it. I have always believed in it and remortgaged my flat to start it. But you are never sure which way these things are going to go so I am very pleased.”