Argentina was one of the world’s wealthiest countries a century ago when Buenos Aires’ reputation as ‘the Paris of South America’ was at its height.

But in the 21st century it is known for its 2001 debt default and ongoing economic turmoil, prompted in early 2014 by the government devaluing the peso followed by another (much smaller) default in July.

Yet despite these troubles, the South American nation is gaining a growing reputation as an important emerging market and trade partner.

It also has a diversified industrial base, encompassing areas such as food processing, consumer durables, textiles, chemicals and petrochemicals.

Argentina’s GDP per head ($18,600 in 2013 on a purchasing power parity basis), places it second to Chile among South America’s most affluent nations and it experienced growth of 8.9 per cent as recently as 2011.

While now in recession, Argentina’s medium to long-term trade prospects remain positive as it stands to benefit from rising demand for meat and other food products from fast-growing Asian nations, according to a recent HSBC forecast.

Indonesia and India will become the fourth and fifth most important destinations for Argentina’s exports by 2030, it predicts. Brazil, China and the US will be unchanged as the top three.

Many companies in the United Arab Emirates could find significant opportunities in this growth in trade from Argentina to Asia.

Argentina wants to use Dubai as a hub to export agro-industrial and livestock products, including halal meat, around the UAE and the rest of the Middle East, Africa and south Asia. 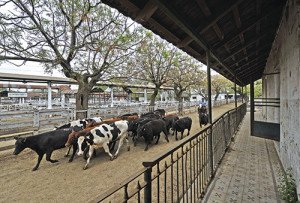 Dubai’s Department of Economic Development signed a cooperation agreement on the issue with Argentina’s Ministry of Agriculture in 2012 and further talks have since taken place to move the idea forward.

Bilateral trade relations have been dominated by UAE imports, as shown by a 2014 Economist Intelligence Unit (EIU) report, commissioned by Dubai Chamber of Commerce and Industry to mark an official UAE visit to Latin America.

Imports from Argentina totalled $280 million in 2012, including $72 million of maize, $35 million of barley and $29 million of tubes and pipes for the energy sector.

UAE exports to Argentina were worth only US$33 million, mainly organic chemicals.

However, sources in Dubai Chamber said trade in that direction could soon flow much more freely, with potential for greater exports and re-exports.

“UAE businesses could re-export a range of manufactured and semi-manufactured products made in east Asia, south Asia, central Asia and Africa that are needed by Argentina,” one source said.

“Examples could include plastics, electronics and electrical equipment, panels for solar technology and used automobiles.”

The chamber also sees Argentina as a target market for ceramics, iron, steel, glass and glassware made in the UAE and for re-exports of pearls, stones, precious metals, furniture and bedding.

Argentina has actively sought funding from countries including the UAE for hotels and tourism, renewable energy and agribusiness.

One potential investment avenue is olive groves. Global demand for olive oil is growing and Argentina hopes to benefit from Mediterranean production shortfalls.

Another is for UAE businesses to help construct large solar plants in Argentina, an area of “substantial potential” for cooperation, according to the chamber.

YPF held talks with Dubai’s Dragon Oil that same year and potential remains for cooperation with UAE companies in tapping both conventional and shale fossil fuels.

Nuclear energy is already an area of unity. Argentina has had nuclear plants since the 1970s and struck an agreement with UAE last year to transfer knowledge, technology and nuclear material.

In 2013, the UAE Federal Customs Authority signed an agreement with its Argentine counterpart to share information about shipments, customs policies and training.

The following year Hector Timerman, Argentina’s foreign affairs minister, led a business delegation from his country to Dubai. It included executives from sectors such as software, construction and pharmaceuticals as well as the food industry.

Dubai Chamber is also planning an office in Sao Paulo, Brazil’s main business city, which will provide a gateway to Argentina and other countries on the continent.

Argentina’s currency devaluation has inevitably impacted on its imports this year but the EIU predicted they will rise strongly between now and 2018.

It also forecast an improved business and policy environment after Argentina’s October election, which will mark the end of Cristina Fernandez de Kirchner’s presidency.

While the old phrase “as rich as an Argentine” might never come back into fashion, there are clear signs Argentina’s near future should prove far more prosperous than its recent past.