It wasn’t until a friend suggested that she should cut down on dairy that Natasha Stephenson learned she had a food intolerance. The health conscious yogi, had grown up with eczema and despite the constant irritation of the skin condition, she learned to manage it.

After hearing about the adverse affects of dairy for the skin, she also wondered if her gluten rich diet could be feeding her eczema and so she decided to completely cut out both from her diet.

“I tried it for over a month and felt superb. My rashes went away and my energy was through the roof. It changed my life completely,” explained Stephenson.

However her weekly shop from then on proved to be a challenge. “I just moved to Dubai from London where it was really easy to get gluten and diary free products but in Dubai I struggled to find them. Sure, I could find imported versions with a long shelf life but that wasn’t as healthy or as tasty as the regular versions,” she says.

But what was worse for the self-confessed dessert junkie was that she couldn’t find any gluten or dairy free homemade desserts.

These discoveries spawned a new business idea for the entrepreneur who previously owned Rawr yoga studios – to start her own organic all-natural food manufacturing company in Dubai to supply local retailers. 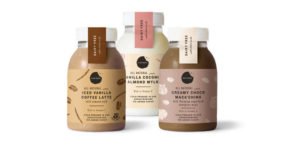 “This is how Muncherie was born,” she says. “My mission was to create delicious alternatives, free of these sensitivities, as well being clean, nutritious and to be accessible and affordable to everyone.”

The Estonian native says that living gluten and dairy free is a lifestyle rather than a diet for her. “It comes naturally to me now and no longer means depriving yourself of something scrumptious.”

In less than a year since her company launched, the 33-year-old entrepreneur has produced an extensive line of organic raw products – which includes everything from chili flavoured kale chips to dairy free almond milk and coffee drinks to probiotic coconut yoghurts and protein brownies – in over 40 stores across the emirates including Spinneys, Milk and Honey, Jones the Grocer, Waitrose and Choithrams.

“It started with me making desserts at home for myself and then it evolved into proper food manufacturing – everything is raw, we’re not cooking anything,” she says. Eating a bowl of Muncherie’s kale chips is the equivalent to “eating a huge bowl of salad”, according to Stephenson as all of the nutrients are retained.

“All of our drinks are cold pressed and our kale chips are dehydrated below 46 degrees to retain the nutrients, only water is lost in the process,” she adds. And Muncherie’s dessert range is equally guilt-free, using only Non-GMO, Paleo and unprocessed ingredients.

While Stephenson was medically diagnosed as gluten intolerant – which is a physical condition of the gut – she says many people today are self-diagnosing as gluten-sensitive and eating gluten-free as a lifestyle choice, which can only be good news for start-ups like Muncherie.

While the “organic movement” in the UAE is lagging behind in comparison to countries like Australia, the UK or US where it’s a multi-billion dollar industry, demand for organic food is on the rise, according to a UAE University survey last year.

But according to experts, the organic industry’s growth in the UAE is being stifled by a lack of local production. This is about to change if Stephenson has her way. “There is big demand for organic locally produced products here, it took me six months of meetings and various tastings before I convinced supermarkets here but once they found out that we were a local manufacturer using locally sourced organic ingredients they were happy to have us in store.”

Stephenson believes that having locally produced organic products is what will fuel Muncherie’s growth. “I’ve sampled kale chips from all over the world and I can honestly say that ours are the best I’ve tasted. If you buy kale chips from the UK or Germany the shelf life is usually around eight months whereas ours is around three months. All of our products have a low shelf life which is more expensive for us as a producer but this is our philosophy to have nutrition and taste as our priority above cost or volume.”

Muncherie has just relocated to larger premises in Al Quoz industrial area to meet the growing demand from local retailers for their products and Stephenson is convinced that the UAE market is ripe for the organic movement despite a sluggish start.

“Abu Dhabi for example is a little further ahead of Dubai with this organic movement. We already supply our freshly made cakes to retailers there and we also supply a lot of cafes with our raw almond milk but Dubai is quickly expanding also as people become more and more conscious about what they are eating.”