In an exclusive interview, Bulgarian Prime Minister Boyko Borissov talks about his country’s accession to Schengen and why re-establishing old relationships in the Middle East is the key to securing future investments

Boyko Borissov cuts a formidable figure. Bulgaria’s prime minister might be approaching his sixth decade but he is in impeccable shape – little surprise as he once served as a bodyguard and black belt champion, not to mention still playing professional football for a local team.

He was once nicknamed Batman for his reputation for getting things done, although the title was tarnished after he was ousted from the prime minister’s office in 2013 after a four-year term. Days of street protests about high electricity prices, widespread poverty and alleged government corruption put paid to his ambitions then but he is now back for a second term in office, having shaken off critics who complained after his centre-right GERB party’s failure to win a majority in the October 2014 parliamentary elections.

Today, the 56 year-old prime minister is cast as more of a white knight determined to bring economic prosperity to Bulgaria. The first step on that road, according to Borissov, is to enter the Schengen zone.

Although it is still considered one of the EU’s poorest states, Bulgaria is a stable, democratic country that continues to liberalise its economy despite an unstable banking sector. Given its neighbours’ recent troubles — Greece is in financial turmoil and Turkey has problems with security and political instability — Bulgaria is seen as a relatively safe haven in the region.

For Borissov, every day presents a new opportunity for change and he has little time to waste. As Bulgarians rush around outside his office in the capital Sofia, preparing to finish the working week and head off to the mountains or Black Sea resorts to enjoy the summer climes, Borissov is bracing himself for a busy weekend of official engagements.

His schedule is filled with “work—just work. I do not have a free week”. In a few hours, he plans to head to the Bulgarian-Greek border, the first of a round of engagements. “Today we are opening a new road, tomorrow making a new building for the state attorneys,” he says. “A politician should do things that have immediate impact on people and they should feel that. I do not have time to waste. Actions are what counts.”

I do not have time to waste. Actions are what counts

Borissov’s route into politics was an unusual one. After leaving the police force in 1990, where he worked as a lecturer at the Higher Institute for Officer Training and Research in the Ministry of Interior, he founded a security company and worked as a bodyguard for King Simeon II of Bulgaria, who had renounced his title and become prime minister. When King Simeon returned from exile in 2001 and became prime minister, he appointed Borissov as secretary general of the Interior Ministry. Borissov quickly gained popularity and won Sofia’s mayoral race in 2005. Since being elected as prime minister for a second time in October last year, Borissov’s popularity has steadily soared, no small feat considering his party got only 32 per cent of the vote in the last parliamentary election and was previously ousted from government. 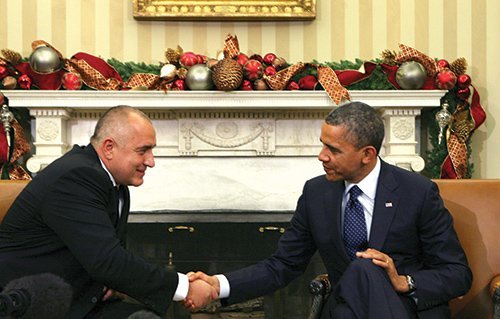 With a sharp decline in foreign investments in recent years and the ongoing blockade of millions of EU funds because of corrupt practices during the previous socialist-led government, Borissov says he is “on a mission” to restore stability and secure a positive outlook for Bulgaria’s future. His approach is two-fold and involves “meeting ordinary Bulgarians on a regular basis and expanding Bulgaria’s foreign relations at the same time”.

“Few things are of greater importance for the country right now,” he says. “[In terms of] financial discipline, we managed to achieve our target of a budget deficit below three per cent. Secondly, our fight against smuggling and corruption is something that is praised in Europe by our colleagues at [the European Anti-Fraud Office] OLAF.”

Less than a year ago, he presented his right-of-centre second cabinet, formed by his party GERB and the Reformist Bloc, an alliance of five parties. The coalition was supported by the former president’s left-wing party ABV and the far-right Patriotic Front. Borissov knows without international support, this fragile coalition is unlikely to last long. 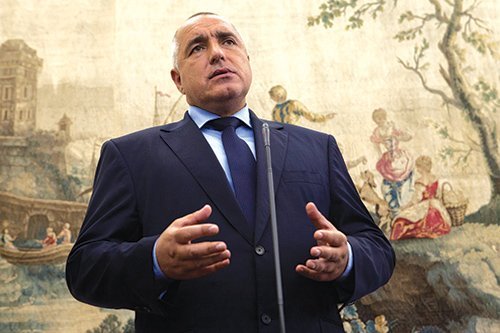 Like many EU countries at the moment, Bulgaria finds itself at the centre of an immigration crisis. Until a Europe-wide solution is found, it is trying to stem an influx of Syrian refugees who are determined to reach Europe via Bulgaria’s borders.

“We have a great responsibility as the last border post before reaching the EU and we are aware of the pressure from the international community,” says Borissov.

So far, the country has not been winning this battle. Its efforts to build a new border fence have been subject to criticism from the international community and officials have been accused of the mistreatment of Syrian refugees. Borissov, a savvy media man, knows unless he deals with this criticism, his country’s accession into Schengen is unlikely to happen, despite him claiming it has “met every required criteria” for entry.

Borissov is quick to brush off any negativity and insists the country’s “enormous efforts to facilitate the migration process and install border protection” would pay off. He adds, “There is not a single obstacle in our way” in reference to Schengen and says he hopes the issue will be discussed in an EU Council meeting in October.

“Millions of Bulgarians live and work abroad already,” he says. “Hundreds of thousands travel frequently. When the weekend comes, you can see many cars heading to Greece and Turkey. People in our former socialist camp, who were not allowed to travel, now travel a lot. There are many Bulgarian companies with foreign partners. This is a truly global country operating in a global world.”

Before the fall of communism in 1989, Bulgaria looked beyond the Cold War countries and expanded its political and economical ties to the Middle East and parts of North Africa. Many Bulgarians went to work in these regions and as a result, good business relations blossomed. In recent years, Bulgaria has been focusing on renewing those relationships. Borissov says he wants to re-establish economic ties with Gulf countries which have shown interest in its transport, agriculture and energy sectors.

He is keen to make this region a priority: “Bulgaria’s connections with the Arab world go beyond 1989. We have good relations with Saudi Arabia, Qatar, UAE and Kuwait.  Thousands of Bulgarians worked in Algeria, Morocco, Tunisia, Libya, Iran and this helped us to maintain our durable ties.”

Borissov wants to re-establish economic ties with Gulf countries which have shown interest in its transport, agriculture and energy sectors

Borissov is banking on significant investment from these countries in the future. “These countries have expressed interest in collaborating in everything from our nuclear energy to traditional sectors,” he says. “However, we cannot accommodate nor satisfy the demands of such huge markets.

“We had huge trade volumes between our countries in several sectors like meat production and agriculture. We have to regain good market positions that were once occupied by Bulgarian contractors. As a result of Bulgaria’s transition in the last twenty years, we have lost access to some of these markets but I am confident we will regain these good business connections. I am sure foreign investors are noticing the changes already.”

Borissov is convinced Bulgaria is emerging from its foreign isolation — but will his cabinet be up to the challenge and bring in cash from foreign investors?

“This was Bulgaria’s biggest problem in previous years. Now there is a difference. We are having meetings in Paris, Berlin and Brussels and we are expecting the British prime minister in November and the president of Germany this fall,” he says. “These are high-profile visits and a sign of the support we are receiving.”