"I Made a Living Being Myself"

Iconic talk show queen and media mogul, Oprah Winfrey, 59, is considered by many the most powerful woman on the planet. With an estimated net worth of $2.7 billion she has been ranked the richest African-American of the 20th century, the greatest black philanthropist in American history, and was for a time, the world’s only black billionaire.

Born into poverty in rural Mississippi to a teenage single mother and later raised in an inner city neighbourhood, Winfrey experienced considerable hardship during her childhood. She landed a job in radio while still in high school and began co-anchoring the news at age 19. Then she entered the talk show world – and the rest is history.

Today the media mogul lives in Chicago with her partner, Stedman Graham, whom she has been with since 1986. They have been engaged since 1992 but haven’t made it official yet.

Now she returns to the big screen in Lee Daniels’ The Butler, a true story of an African American butler, Cecil Gaines (portrayed by Forest Whitaker), who worked at the White House for three decades under eight different presidents. Winfrey’s performance as his proud opinionated wife, Gloria, has garnered Oscar buzz. Winfrey shares her thoughts about the film, civil rights and personal identity. 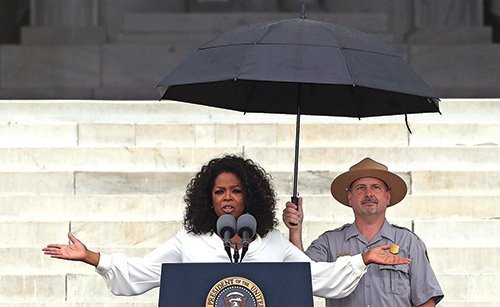 How did you get involved with this project?

Lee Daniels. And I was telling him, ‘I got a network thing going on,’ and he wouldn’t listen to me but I am glad I said yes, I finally said yes because of the story itself. He had been talking to me about the story and Gloria, who I play, for quite some time. I am a student of my own history, of African American history, and I believe that when you know who you are, you have the ability to move forward, not just with the strength of yourself but the strength of your entire ancestry. So the ability to tell that story of The Butler in an entertaining way that would offer an opportunity for the rest of the world to experience a part of history that made our nation who and what we are, and to demonstrate the love story of an African-American family and in a way that tenderness is exposed to the world, so that people can see that we are all more alike than different. When you see the two of us at the bus station, sending our son off to college, it’s how every parent, regardless of race, regardless of economic background feels when you have to let go of your son. When you see us sitting at the breakfast table in the morning, I wanted to communicate that sense of love and connection and tenderness and also to allow the spirit and integrity of all of the African-American women, colored, Negro at the time, who stood by the men and held the families together with their grit and their determination, and allowed their own dreams to be repressed. I thought a lot about what it means to be a woman in the 50s and 60s, a woman like Gloria or a woman like myself or any other woman, all of us have a little fire inside and Gloria had a fire inside of herself, and what it’s like to be the kind of woman who has that fire, but what do you do with it? You can’t just watch Edge of Night all day long, (laughs) and make a tuna fish sandwich and drink a beer and that’s why you tiptoe with the next door neighbour, Terrence, a little bit. 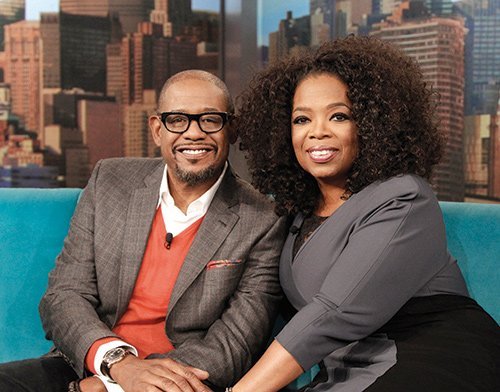 But when he looks like that too, it doesn’t hurt?

He didn’t quite look like that. (laughs) Terrence was such a brilliant actor that he came to set the first day and he had removed the cap from his tooth, so he has this big gaping hole. (laughs) But the opportunity to show who the women were of that era, because Gloria is not just herself, but a composite of women of that era, who sacrificed, who also were the stabilizing force in the family, because the butler couldn’t have been who he was and still had a family had it not been for her. So I loved all of that about the script.

There was a line in the film that struck me, ‘We have got two faces; one we show the white people.’ It’s one of the lines that I feel is parallel to today. Is that your experience as someone who has strived and achieved success in a white dominated business, and how do you we get past that point?

I don’t feel that. I feel I made a living being myself. When I was 19 years old, I interviewed Jesse Jackson as a young reporter in Nashville, Tennessee. He said to me then: ‘one of your gifts is being able to be yourself on TV.’ So when I moved to Chicago and I was up against the then quote King of Talk, my boss at the time, called me in the office and said, ‘Listen, we know you will never be able to beat him, so just go on the air and be yourself.’ So I have made a career out of my own authenticity, I don’t have one face that I present to the white world or the black world. I talk to my dogs the way I am speaking right now, (laughs) so it’s always been the same for me, and I say that with great pride and homage and honour to the people who were the generation before me. 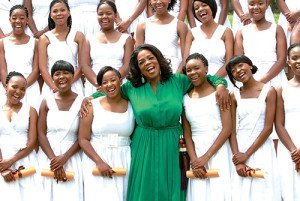 With so many things on your plate between the Oprah Winfrey Network; O, the Oprah Magazine; Oprah Radio on XM; Oprah.com, why the return to the big screen as well? One of the reasons why I wanted to be in this movie is because I am the daughter of a maid, and my grandmother was a maid, and her mother was a maid, and her mother was a slave. So the domestic worker and the speech that Dr. King gives to my son in the movie, I feel validated by their courage, l feel validated by the war that the butler and his entire generation fought in their own way, and the fact that there’s another generation of freedom fighters and who because of evolution and growth and change, decided that we are not going to do that anymore. I think that was also necessary. So both wars were necessary for the time. But there’s a wonderful poem by Paul Lawrence Dunbar called We Wear the Mask that I learned as a little girl, but because of the courage, because of the conviction of an entire generation of whose shoulders we all stand on. I never had to do it.