Dubbed the Sisterhood of the Pantsuit, women are coming out in force to support Hillary Clinton. Does a female president threaten to upset the status quo even more than a black president?

It has begun. Within 24 hours of Hillary Clinton declaring she will run for president, I have seen her called a bitch. I have read that at 67 – the same age as Ronald Reagan, younger than John McCain – Clinton is too old and Bill O’Reilly on Fox News believes “there’s got to be a downside to a woman president”.

When Clinton, as Secretary of State, met Aung San Suu Kyi, the Burmese dissident figurehead expressed her desire to be a “flesh and blood” politician. Hillary warned her it is not for the faint-hearted. She should know. Her 2008 bid was a son et lumiere of sexism: the college jocks heckling “make me a sandwich”, the novelty Clinton nut-crackers shaped like thighs, the South Park skit about a nuke in her private parts.

To a certain segment of America, Clinton was not a Yale scholar and senator legitimately running for high office but a school ma’am, a shrew, every middle-aged man’s angry, litigious first wife. Ten months ago, interviewing Clinton in New York, I wondered why she would go through that hell again. She knew the battle ahead. “Anybody,” she said, “who gets into the public arena these days knows full well it is a brutal, unforgiving environment.” She believed criticism had worsened for women with a vile, online judgmentalism. Growing up in the 1960s, “there wasn’t the constant holding up of a certain model of what a woman’s body is supposed to look like and the veiled message that you do not measure up, that you are not good enough”.

Of her energy and appetite to  campaign, there is little doubt. At that  time Clinton was in a political holding  pattern – launching her careful, dry  memoir Hard Choices about her million-mile diplomatic mission, gathering strength and awaiting the birth of her grandchild. But the circus around her was already presidential. The secret service agents whispering into earpieces by the lift, the super-sharp, devoted West Wing-esque young aides, the roses on the table chosen to match precisely the cerise of her jacket.

Unlike female TV anchors of the same vintage, Clinton has not dabbled in facial cosmetic surgery nor starved herself to please a youth-obsessed nation. She is a slightly-built, well-preserved, handsome woman. She looks her age, but without doubt is the fastest-thinking person I have interviewed. Neither Sheryl Sandberg, George Osborne nor Condoleezza Rice can rival her synaptic snap, the infinitesimal space between a question ending and the fluent, perfect, nuanced reply. 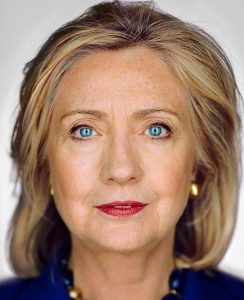 When I suggested the image of the president is youthful vibrancy, all that running up the steps of planes, she laughed: “Wear flat shoes, that’s my advice. I think you can have individuals of all ages, all backgrounds, all attributes who exhibit energy and those that do not. But I don’t think it is so much age as how you conduct yourself.”

How should a woman presidential hopeful conduct herself? That has been Clinton’s dilemma. If a man speaks and is tough, he is strong; a woman is a ball-breaker or a bitch. Clinton was “glacial” because she was too clever to suffer fools, a haughty blue stocking as First Lady for preferring health reform to baking cookies. Yet after the famous photo of Barack Obama’s cabinet witnessing the on-screen death of Osama bin Laden, a shocked Clinton, with her hand over her mouth, was judged womanishly weak.

In 2008 she downplayed her feminist credentials and based her run on her intellectual calibre and experience. This time Clinton is standing for women. Her daughter Chelsea has already said America is ready for a female president. And outside Clinton’s New York book signing, hundreds of those queuing were gagging for her to run. But she does not only attract Manhattan liberals. In 2008 in small-town Ohio, I interviewed socially conservative women disinclined to vote Democrat but who would turn out for her because Hillary’s appeal is summed up in the slogan on her unofficial merchandise: the Sisterhood of the Pantsuit.

Pantsuit Woman is not a glamourpuss. She is practical, grafting, selfless, no-nonsense. She works an extra job after a sticky divorce, takes a casserole round for a bereaved neighbour, puts her children’s problems to rights. After decades playing second fiddle to her husband Bill, enduring his affairs and saving her marriage, Clinton the survivor is the pantsuit queen. And being Secretary of State, when she was finally given a job worthy of her talents, flying the world and free from her husband’s shadow, raised her cool status. The photo of her in sunglasses in an army transport plane, unsmilingly checking her BlackBerry created the internet meme “texts from Hillary”. Its message was that Clinton got the job done and told it like it is. Consequently she has been more playful with her image. Besides “Flotus” and “glass-ceiling cracker” her Twitter bio includes “hair icon”. Besides, the hard, impermeable, quasi-masculine facade is perhaps not her best election mode. In 2008, with her party’s nomination slipping away, exhausted and speaking in a New Hampshire coffee shop, she began to cry. You could hear the tyre screech as women in station wagons headed for the polls: she won that primary, if not the race.  It is easy to forget, when you meet this burnished, expensively dressed, former First Lady that she was a draper’s daughter from Park Ridge, Illinois, a spectacled swot who won a scholarship. In her first memoir she recalls her awe at sophisticated Yale girls smoking cocktail cigarettes and talking of Europe. She never left the US until she met Bill.

Just before my interview she had been attacked for saying she took highly-paid speaking engagements because after they left the White House, she and Bill were “broke”. Can she understand what she calls in her campaign launch video “everyday Americans?” “Of course. I know how hard life is,” she said. “Bill and I had student loans. Neither of us was born with some kind of social standing and wealth. We were very fortunate because he was in public life for a long time but the flip side of it is that we really had to hustle to put together the resources that we needed once we got outside the White House. We could not go to some family estate or some beautiful home. We had to get out there and do it for ourselves.”

The word “hustle” is characteristically frank. Her critics say she is no valiant outsider, but a tough machine politician, a dynast tainted by her husband’s scandals, Whitewater and Lewinsky, plus her own secret emails in office. They say the Clinton Foundation has links with unpleasant regimes, that far from wishing to constrain neoliberal capitalism she is too cosy with Wall Street. Maybe so, but her supporters will counter no male politician is perfect either and that Clinton is the best shot at power women have had yet. Whatever her tawdry wheeler-dealing, Hillary has never deserted her feminist principles. As Secretary of State, she argued that girls’ education built economic development and women’s rights were human rights to leaders across the world who, she recalls, sat rolling their eyes.

Is America ready to elect a grandmother? I have just read a discussion about Clinton’s hormones, the likely temperament of the post-menopausal woman, as if oestrogen-depletion can be more dangerous than a surfeit of testosterone. She said: “We have had so many grandfathers in the White House that I think for someone to say: ‘In my mind you are disqualified because you might be a grandmother’ is just so ridiculous.”

They will say it all the same, because a female president – perhaps more than a black one – threatens the status quo. Angry men will still shout “make me a sandwich” at Hillary Clinton in 2016. But the difference is women, not just in America but all over the world, are ready to watch her back.