In an exclusive interview, boxer Amir Khan talks about the sport that has made his fortune, his new charitable foundation and how fatherhood has transformed him

Amir Khan was just eight years old when his father signed him up for boxing classes to knock some discipline into him and stop his unruly behaviour.

“His intention was to keep me off the streets, not to make me a world class boxer,” says Khan now.

But as time has told, that simple fatherly gesture – borne of concern because Khan was hyperactive and kept getting into trouble at school – has been the making of him.

At 17, Amir Khan became Britain’s youngest boxing medallist at the Olympics in Athens in 2004.

He went on to become a two-time world champion, winning the first of his World Boxing Association light welterweight titles at 22.

Now 28, all eyes are on him for a clash with the winner of the $300 million mega-fight between two of the biggest names in boxing, Floyd Mayweather and Manny Pacquiao – and Amir Khan says he has never been more ready.

He was spurned by Mayweather when he recently threw down the gauntlet, challenging his rival to a duel. While the unbeaten Mayweather instead decided to fight Khan’s friend and former training partner Pacquiao, speculation is rife Khan will go head to head with the winner of the May 2 showdown in Las Vegas.

Boxing promoter Frank Warren has already suggested he will be “back in business – big business – to meet the winner…both have intimated that Khan is next in line and it is an engagement he will relish with both of boxing’s Sunshine Boys.”

Meanwhile, fellow Briton Kell Brook, the current International Boxing Federation welterweight champion with a 33-0 record, is waiting in the wings to knock Khan off his pedestal.

As for Khan, he is champing at the bit for a chance to take on the world’s most prominent boxers.

“I need to get back into training myself and focus on what I want to do and see where my career goes,” he says.

“I gave the ultimatum [to Mayweather] because I am not going to be messed around. That happened last year and I was out for a year.

[A fight] would be massive for us both. I want to fight the best guy who is out there and Mayweather is one of the best guys – probably the best guy

“As boxing fans, we have to respect Mayweather’s career and what he has done in boxing. He has achieved a lot.

“I know I have the skills and tactics to beat him. It will be a huge fight and give me a lot of recognition worldwide and [will be recognition] for Mayweather in this part of the world, where not many people know him.”

If Mayweather, who has an unbroken record of 47 consecutive wins, fails to beat Pacquiao, Khan is equally keen to fight his friend.

“Manny is up there with Floyd,” says Khan, who is in Dubai to promote the Glory World Series international kickboxing championships taking place next month. “He is definitely one of the top names and a friend of mine. We used to train together and have that respect for each other.

“This is what the sport is about. Fans want to see exciting fights, not boring one-sided fights.”

It is typical fighting talk from one who has made his fortune using his fists. Khan from Bolton in the UK, who cites legendary boxer Muhammad Ali as his inspiration, might no longer be the hyperactive troublemaker who was constantly getting into mischief at school but he does occasionally come unstuck.

Last summer, he was arrested on suspicion of assault after an altercation with two youths in his home town in the early hours. The allegations were later dropped and described by Khan’s camp as a “misunderstanding”.

But lately, it is his charity work which has attracted attention and praise in equal measure.

Khan has a longstanding association with numerous charities, including the National Society for the Protection of Children (NSPCC), Great Ormond Street Hospital in London, Oxfam and Sport Relief, stretching as far back as when he was first propelled onto the international stage.

His charitable work stepped up a pace in August last year when he launched his Amir Khan Foundation to help orphans in deprived communities in Africa and southeast Asia. Its first project is an orphanage for 150 children, which is being built in Gambia. 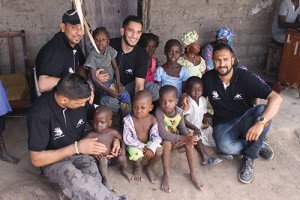 But it was the massacre of 132 schoolchildren in a school in Peshawar last December which affected him so deeply, he flew to Pakistan within days of the incident to offer his support and help rebuild the school.

He spent Christmas last year meeting families of victims and donated the $45,000 gold thread shorts he wore when he defeated American Devon Alexander to the fundraising effort.

As the son of Pakistani immigrants Shah and Falak Khan and having recently become a father for the first time, Amir Khan was horrified by the bloodshed by the Pakistani Taliban and determined to make a stand.

“I went to Peshawar because of what happened and to show my respects,” he says. “I met a couple of families of the children. They were so happy to see me. They were saying even politicians and people in Pakistan did not come to see us in Peshawar and you came all the way from England to see us.

“When I went there, I wanted to do it for my own heart. Obviously it was very sad to see. There was still blood on the walls and bullet holes on the tables and on the floor. It was very upsetting to see something like that. The families were very upset but very strong mentally, which I was surprised about.

I also went to see the kids, to give them that push and tell them not to be scared to go back to school and to be a role model to them. It was my duty to do this. The money will help rebuild the school and increase security around those areas and other schools in Pakistan so children can feel confident going to school

His pledge to give something back and be a role model means he is a frequent visitor to schools around the UK, where he gives motivational talks, and includes opening his first boxing academy in Lahore, Pakistan, in July this year.

If he seems wiser and more mature than the punchy teenager who first burst onto the international stage, it is perhaps because his responsibilities in the last couple of years have grown considerably.

He married 23-year-old American student Faryal Makhdoom in a lavish ceremony in New York in June 2013 and now splits his time between the family mansion in Bolton and a home in San Francisco. Their daughter Lamaisah was born in May last year and doting father Khan is pictured cradling the little girl as often as he is seen in the boxing ring.

Has fatherhood changed him? “I think it has made me more focused as a fighter because everything I do now in boxing is for my little girl,” he says.

“I want it for her so she has an easier life and does not have to work hard. Everything I do is for my family, to give them nice things and support them.

“It is not only about the money. It is about having a name as well so when my daughter grows up she can say: ‘My dad is a champion’.”

Yet both his mother and his wife give the arena a wide berth when he is in the ring because they cannot bear to see him get hurt and Amir Khan would never tolerate a child of his following in his footsteps: “I would never let them fight. It’s a tough sport, probably one of the hardest. I would get them into education or something. There are other ways of having a better life. Boxing does not have to be the one thing.” 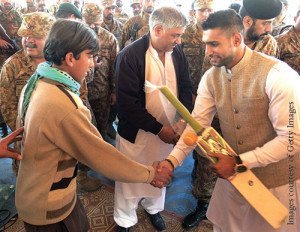 But he is still immensely proud of his achievements as the only Muslim British Pakistani to make a name for himself in boxing.