Global Citizen magazine’s exclusive conversation with Sadhguru, one of India’s
most revered spiritual leaders, on launching one of the world’s biggest ecological
campaigns to save life. By Teresa Esmezyan

As one of our generation’s most notable names in spirituality with over 1 billion views on YouTube and a dedicated global following – yogi, mystic and visionary, Sadhguru has become one of the most influential people of our time. Over the past four decades, Sadhguru has offered technologies of well-being to millions of people across the world through his foundations, which are supported by over 16 million volunteers in 300 cities worldwide. And the message he wants everyone to hear loud and clear?

No Sol. No Life.
Led by Conscious Planet, Sadhguru’s initiative to create a world where communities and governments take more responsible environmental action, the phenomenal endeavour of the #SaveSoil movement is to bring citizens of the entire democratic world together to speak in one voice and affirm our commitment to the health and future of Earth.

“When issues of ecology become electoral issues when the people’s support empowers governments to adopt long-term policy changes to safeguard soil, when businesses, organizations, individuals, and governments make soil health a primary priority – that is when this sustained effort will find fruition, shares Sadhguru in his exclusive interview with Global Citizen magazine.

Soil is our first line of defence against climate change. According to Columbia University’s Earth Institute, soil stores about 25% of the world’s fossil fuel emissions each year. It also helps to filter our water, regulate the planet’s temperature, protect against floods and droughts, and safeguard global food security. That’s why soil degradation poses a critical challenge for the future of our planet. According to the UN, around 52% of the world’s agricultural soil has degraded due to acidification, urbanization, and chemical pollution from human activities. By 2050, that number is predicted to jump to 90%, with far-reaching side effects including massive declines in food production, worsening flooding, widespread desertification, and untold loss of life. What’s more, soil depletion erodes healthy vitamins and minerals in our crops, causing 60 to 90% drops in nutrients, in some cases. As 2 billion people already suffer from nutrient deficiency, further decreases could be devastating.

“The root of all life is in soil, and without addressing that you cannot address climate change,” affirms Sadhguru. Among the solutions, he urges governments and farmers to reinstate valuable organic content, such as leaves and animal waste, in farmable topsoil, embrace agroforestry; an agriculture style that plants trees alongside crops to nourish and protect soil, and reduce meat consumption to free up land for more agroforestry. In fact, the #SaveSoil movement is nothing new. Sadhguru’s mission to reach 3.5 billion people on Earth has been the product of three decades of work and evolution. One of the crucial aspects in the evolution of this movement has no doubt been the sheer number of people it has inspired. However, equally important has been its growing levels of influence.

In a collaborative effort to amplify the message of the Earth’s rapid degeneration of soil, the Global Citizen Forum endorsed #SaveSoil as one of its main grass root initiatives for 2022 and is supporting Sadguru’s ambitious quest across 24 nations to support governments in pursuit of climate action and encourage policy to revitalize soil and ecology

“The #SaveSoil mission aims to reach 3.5 billion people across 192 countries, and we truly believe that by working together, we will be able to conquer this important milestone and play our part in protecting our planet,” shares Talimka Yordanova CEO of Global Citizen Forum.

The Movement in Action And it has already begun. Earlier this month, with the leadership of the Global Citizen Forum, heads of state from four Caribbean nations participated in a historic moment, endorsing the #SaveSoil initiative by signing a memorandum of understanding with Conscious Planet.

The memorandum which was created in consultation with the top scientists in the world, considered each region’s latitude, climate, economic conditions, and traditional agricultural practices. The resolution, titled Soil Revitalization – Global Policy Draft & Solutions Handbook was presented by Sadhguru and accepted by the Caribbean heads of state as an urgent and unifying initiative to restore soil health.

“The issue of soil degradation, which could potentially become soil extinction, is a significant threat to the planet. Over 30 years ago, when climate change was identified as a significant threat, it was small island states in the Caribbean that were in the forefront of this fight. It is instructive that, 30 plus years later, it is the very Caribbean small island states that are now seeking to drive this process of saving our soil from extinction, shared Honorable Gaston Browne, Prime Minister of Antigua and Barbuda, while expressing his pleasure to participate in this initiative to sign this memorandum of understanding with Conscious Planet.

Prime Minister Browne garnered the support of his Caribbean counterparts, including Prime Minister of Dominica Roosevelt Skerrit, Prime Minister of St. Lucia Philip J. Pierre, and Prime Minister of St. Kitts and Nevis Timothy Harris. All four heads of government spoke passionately about the importance of taking decisive action to regenerate and restore the world’s soil, with a clear commitment to institute soil-friendly policies.
Sadhguru affirmed that “these small nations, these pearls in the ocean, can make that turn around and demonstrate” that every nation can and must save its soil in the interest of all future life on the planet. Additionally, he emphasized that “we have lost connection with what nurtures our lives. Seeing soil as an inert substance that you can extract from is a completely wrong approach. It is a living soil. This is the most important message that needs to go to the young generation and the future.

“Sadhguru, Are You a Global Citizen?”
Being a global citizen means acknowledging our role as stewards of this planet and working together regardless of race, religion or nationality to protect the place we collectively call home.

While sustainability is at the heart of the global conversation in our world today – supporting initiatives like #SaveSoil means providing a platform to discuss humanity’s most pressing issues and encouraging meaningful collaborations among experts and policymakers to expedite solutions.

The global citizenship movement itself is about fostering a sense of solidarity that transcends borders, and Sadhguru’s work speaks to that same spirit – through Save Soil and Conscious Planet, he is actively making the world a better place.

“I am very much a citizen of the world, there’s no question about that!” he laughs, when asked GC’s trademark question. “Anybody who walks this planet is a global citizen.” 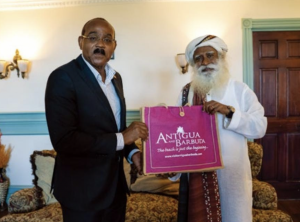 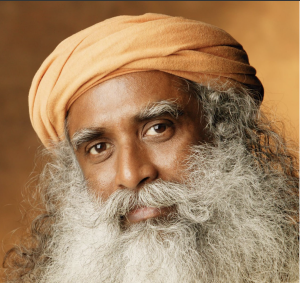 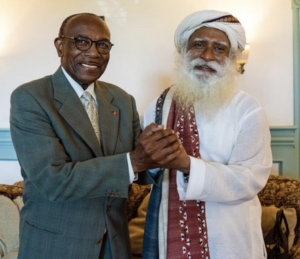