The legendary designer shares his story of entrepreneurship, art and what motivates him on his lifelong journey of discovery.

On an early spring day just off a plane from Paris, Christian Louboutin marvels at the energy of Dubai. The famed footwear designer says the emirate, which he visits often, has a vibe he hasn’t felt elsewhere. “As a child you learn about the foundation of Rome…it was something I found very exciting…the idea of a city being built right in front of your eyes. The feeling I have here corresponds to the building of Rome,” he says. “You arrive and it’s full of cranes. And you come 6 months after and there is a new road and different buildings. The centre has shifted. You see it in front of your eyes, the construction of a whole new empire.”

The fifty-year-old Frenchman knows a thing or two about building an empire. He can be credited for elevating the status of footwear in the fashion world with his eponymous company founded 20 years ago.  He took what was generally an overlooked part of the shoe—the sole—and colored it red, sending women into a frenzy suddenly making shoes one of the most coveted parts of a woman’s wardrobe. He sells more than 700,000 pairs of those signature red soled shoes annually. Known for their sky high heels and extravagant embellishments including spikes, fur and even rubies, a pair of “Loubis,” as women call them, can range in price from $500-$6000 (the latter for custom made gemstone encrusted pair).

With an annual sales volume estimated at over $300 million (according to Women’s Wear Daily), Louboutin’s company is still privately owned, something which helps him retain creative control over the brand. The numbers speak for his success. He has 70 stores worldwide and is growing rapidly. The bulk of sales are still concentrated in the west, but demand from luxury markets in the emerging economies of the east is catching up quickly. He has opened 11 stores in the Middle East in the last two years, with shoes flying off the shelves as the boutiques try to keep up with demand. And his appeal is not limited to just women. Two years ago Louboutin launched his men’s collection, which already makes up almost a quarter of all sales.

During the course of our conversation, it is clear Louboutin is a man of many pursuits beyond footwear. He is equally comfortable talking in detail about the decimation of culture under dictatorships in Egypt as he is describing the archaeological significance of  the pre-Islamic Nabataean ruins he visited recently outside of  Jeddah or his obsession with Pakistani miniature painting. His passion for the region is so deep rooted he set up homes in Egypt and Aleppo.

Louboutin’s approach to business is similar—If he loves a city, he will set up shop. He won’t enter a market unless he has a genuine connection to the place. “The growth of the company is dependent upon the place I like at the end of the day. A new expansion is not only numbers based; it is emotional,” he said.

The growth of the company is dependent upon the place I like at the end of the day. A new expansion is not only numbers based; it is emotional

“I just opened a store I love in Rome. Every Italian journalist was asking ‘why not Milan?’ (the fashion capital). The answer was because I love Rome, and I don’t particularly like Milan,” he says unapologetically. “From a business point of view, yes, we’d probably do double or triple in Milan than in Rome. But the reality is I’m so happy to have a store in Rome. He adds that the benefit of being a privately owned company is that he can still make decisions with his heart. “You don’t necessarily have to explain to a board everything.”

His love for discovery started at an early age. As a child growing up in the 12th arrondissement in Paris, he would often visit a travel agency near his home and pick up brochures and sit in his room planning his adventures. Detail oriented from a very early age, the young Louboutin would go so far as to think about time differences, currency and budget for his imaginary trips. “In my mind, I was always traveling.” At the age of 15 he finally realized his dream when he took off for India. “I love India, always did. After my first trip when I was 15, I went there 7 years in a row, every year.”

I love India, always did. After my first trip when I was 15, I went there 7 years in a row, every year.

We meet next with the designer in that beloved place of his first international adventure. From Dubai he traveled to Mumbai to open a new flagship store in a historic building in the south part of the city. This is an unconventional move for a luxury brand (which typically are in malls in India). But it is exactly as Louboutin would have wanted. He is clearly his element in India. The morning of his big store opening, Louboutin takes us to one of his favorite destinations in Mumbai—Chor Bazaar (or ‘thieves’ market), navigating with the comfort of a local. He comes here regularly to buy vintage Bollywood film posters and other odds and ends. When asked what he does with them, Louboutin, a longtime fan of Indian cinema, says some go in his homes around the world and others end up on the walls in his boutiques. Not surprisingly, Louboutin himself is very involved in the interior design of each of his 70 boutiques. 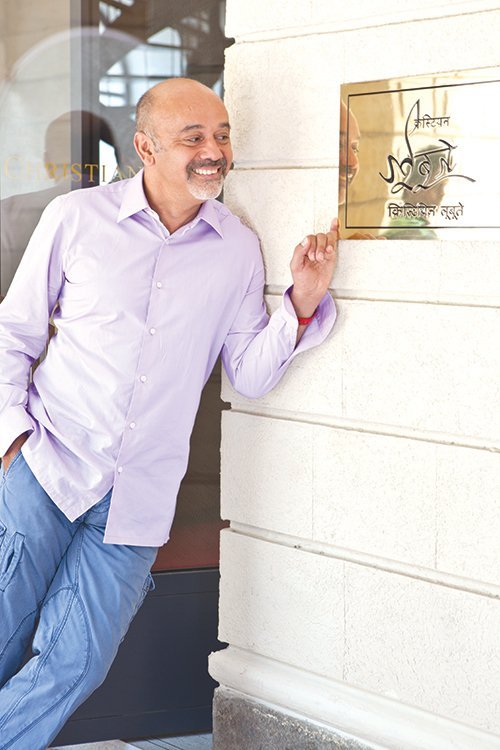 Despite having the world’s biggest stars clamoring to be dressed by him, Louboutin displays a humility unlikely for someone of his stature in the fashion, an industry notorious for big egos. At his opening, Louboutin is thrilled his friend Bollywood superstar Amitabh Bachchan has dropped in.

“I don’t like to go for trial as it is a lot of negative energy,” he says. However it was important to him to make a statement. “I couldn’t not do it,” he says, in reference to protecting the principle of owning the copyright to a creative concept. “If you are carrying the idea of luxury in your brand how can you not respect another individual’s creativity?” Though YSL was allowed to continue to sell their all red shoe, Louboutin retained the exclusive right to use the color red on the bottom of shoes whenever the outer portion is any other color besides red. That was enough of a win for him. “It wasn’t just about shoes. For a lot of people I represent the idea that out of a dream you can actually build a company. I’m not the son of someone famous, but I was able to build something on a creative idea. I felt I owed it to my supporters to show them that if you have been doing your own thing, you can not be crushed by a big company. Just because you’re not backed by multibillion-dollar company doesn’t you must back down.”

Louboutin’s passion for championing the smaller players extends to working with local artisans. As an avid traveler, he always has his eyes open to creative concepts.  While in Bhutan a couple of years ago, Louboutin fell in love with the craftsmanship of the country, especially their woodcarving and metal work. Inspired to incorporate that into his designs, he collaborated with a local school of artisans to develop shoes so he could share their craft with the world.  “I don’t want to work with them for the first sample and then the rest goes into a cheap mass production in China. If they can only do 300 pairs in one season, that’s fine. I prefer to have 300 pairs created by the artisans over 3000 based on a copy of their work.” He admits that’s not a lucrative process, but he is not doing this for the money. It’s about keeping a craft alive. “You have to keep those people working. If we don’t do that, then don’t expect creativity to keep on living.”

As we bid farewell in India, Louboutin says he will be jetting off next to his home in Portugal for two weeks to focus only on sketching the next collection. He still singlehandedly designs each and every shoe himself.  This is a staggering task given how many shoes he must make season after season.  But the designer and entrepreneur with boundless energy will not release those reins. “You know the core of my business is drawing. It is the real pleasure that I have. Otherwise it is just running a company.” Spoken like a true artisan.